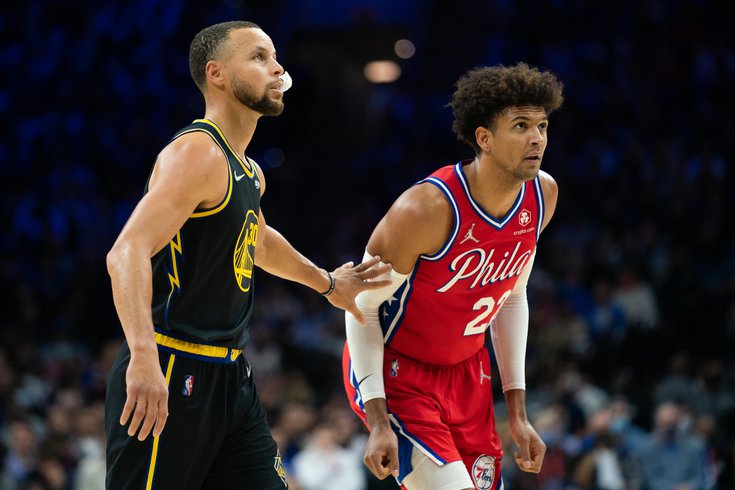 Matisse Thybulle's performance against Steph Curry Saturday night is one that will be remembered for quite a while.

The thousands of Matisse Thybulle fans in the crowd on Saturday night, bellowing with every battle won against Steph Curry, had elite company lurking in the Wells Fargo Center tunnels after the game. Warriors coach Steve Kerr, who has seen the highest peaks of the Curry experience, called Thybulle's performance one of the best he'd seen against the MVP candidate in a long time. Teammate Joel Embiid, an All-Defense player who started alongside a DPOY runner-up last year, reiterated that he believes Thybulle is the best perimeter defender in the league.

So who did Thybulle, the author of a performance that warranted such praise, feel was responsible for the down night for Curry?

"Having guys willing to let me take that one-on-one matchup and play the rest of the team four-on-four, and be able to overrotate and honestly get into a lot of really tough rotation situations on defense," Thybulle said after the game. "[They] put out a lot of fires to allow me to stay close to the body and not let Steph get anything easy."

To put it lightly, the man was being a little too modest. You don't see many 6-for-20 outings for Curry, 3-for-14 performances from deep, and everyone seemed prepared for Curry to go on a rampage on national television to make one final push for the all-time record for made threes. Thanks to Thybulle, Ray Allen remains the longball king for at least one more game. The only history made was on the defensive end — according to ESPN Stats & Info, Thybulle was the first player to ever block two different three-point attempts from Curry in the same game, a remarkable achievement that gives his night greater context.

This is just a GREAT block from Thybulle, he works over the post split screen and continues the chase for a rearview block on Steph. pic.twitter.com/1tYW2FMmNR

It was clear within minutes of the game starting how influential Thybulle would be on Saturday night. Wrapped around Curry on an early first-quarter possession, Thybulle went from hugging him off-ball to chasing him around a screen from Kevon Looney, moving side-to-side as Curry tried to break him down in space. There's no point in the possession where Curry knew peace, and he would eventually toss a harmless runner off the back of the rim, Thybulle earning the Sixers a stop basically by himself.

Saying Curry is a perpetual motion player is accurate in that it describes how hard he makes you work, but it doesn't get at the real challenge. He'll be sprinting around a wall of screens one possession, then just standing around the elbow on the next play, right up until it's time for him to make his move, and then he explodes out of a standstill and forces you to match his pace. The contrast is what makes him so dangerous. You think you've got a break after he has sprinted around the floor for four straight plays, and then he punishes your momentary weakness.

In so many words, Thybulle described the physical things he can do as a defender as the easy part of the game, mostly because they're a product of what he was born with — the long arms and big hands, elite agility, and the ability to explode from unorthodox stances to recover when he makes a mistake. Those aren't things to take for granted, but they've always just sort of been there for him.

The mental side, Thybulle says, is a lot of the battle against a guy like Curry, who can devastate you by turning your good defense into a useless blip during his personal barrage of highlights.

"There's like no secrets to guarding people like that," Thybulle said. "You got to play really hard, you've got to be willing to get scored on. And he's going to make some spectacular plays, and you have to be able to play through that. It's just trying to be a consistent force and not let his success take you on a roller coaster."

"The hardest part is the mental side of understanding where he's trying to score, or how they're trying to get him open, not falling asleep on plays because he's one of these players who can just lull you to sleep. Before you know it, he's wide open shooting a three. That mental discipline was honestly one of my focus points coming into this game, just trying to stay locked in for the duration of the game."

Nothing drove home the point about mental sharpness better than watching other guys briefly taking the assignment out of Thybulle's hands. Guys like Danny Green and Tyrese Maxey certainly battled when given chances, but one moment of hesitation or poor angle vs. a screen and you are dusted, with Curry open for a three before you can even start to plan a counter-attack to get a hand in his face:

To be fair to someone like Green, and to keep with the spirit of Thybulle's team-first approach, there was a lot of work being done around Thybulle to empower this performance. The Sixers sent some aggressive traps and hedges at Curry when he was involved in a pick-and-roll, attempting to force the ball out of his hands to make someone else beat them. Fairly often, the Warriors were happy to oblige, and with Embiid or Andre Drummond or any number of other players in Curry's grill with Thybulle, that necessitated work behind them.

It gets even more complicated in stretchy lineups for the Warriors, with a big like Nemanja Bjelica able to represent a pure off-ball threat while Andre Iguodala screens and rolls for Curry, putting different players into the primary action. It highlights the importance of the "low man" (Green in this instance) to prevent an easy basket for somebody rolling downhill, and then find a way to get back to the corner and contest a three-point attempt:

Playing like this for 48 minutes (or at least the 36 with Curry on the floor) is hell. And there were plenty of plays Saturday night where the Sixers had to be comfortable with moments and shots like these from capable role players. On a better night for the Golden State supporting cast, perhaps we're discussing Thybulle's performance like a nice deck chair on the Titanic. But the Warriors made just 12 of 48 threes against Philly, the Sixers surviving so they can brag about what they did do.

This team was well aware of the opponent's opportunity to make history against them, with Doc Rivers crafting a pregame message around the idea that people were showing up to their arena to potentially see the visitor put on a show. All the want-to in the world, though, would have been useless without a guy capable of chasing greatness all night. And as if going blind from staring at the sun too long, the Sixers player with the best view of Curry with millions of people watching him work will hardly remember this one until he gets a second viewing.

"You kind of blackout to a certain degree, it's just every play for, how many minutes did me and him go for?" Thybulle said. "I don't remember enough of the game to give you an honest opinion of how I think I did."

You did pretty well, Matisse, if the opinions of this writer and millions of people watching the game count for anything.