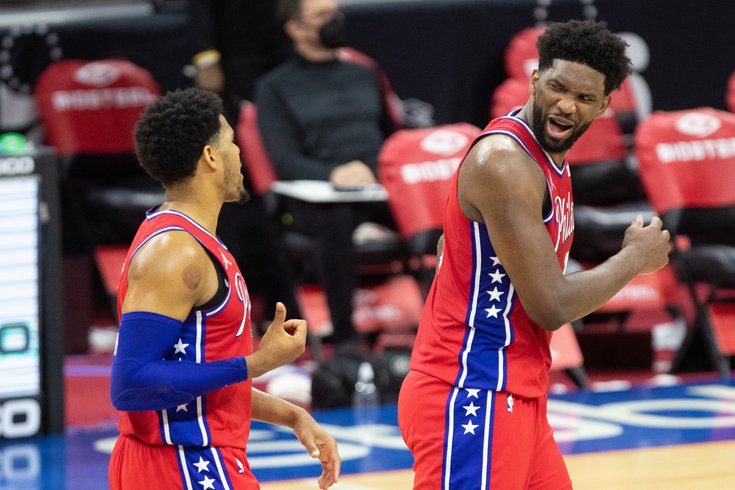 Joel Embiid celebrates with Tobias Harris during the Sixers' overtime win against the Jazz.

As if a matchup of the No. 1 seeds in each conference needed any extra juice to close out the first-half schedule, this one happened to feature Joel Embiid against Rudy Gobert, pitting an MVP candidate at center against a multiple-time Defensive Player of the Year on the other side. Embiid has never been all that shy about his disdain for awards voters who place Gobert above him, and he put up a line that made it look personal: 40 points and 19 rebounds on 14/27 from the field, the game-tying shot at the end of regulation, and the W.

The vendetta extended far beyond Mr. Gobert, as most of us learned in the aftermath of the game. Taking aim at multiple members of the media, Embiid addressed the suggestion that he was fearful of a matchup with Gobert, an idea that was floated after he missed the previous meeting between the two teams.

"First of all, according to [Inquirer beat writer] Keith Pompey, according to him, I'm scared of [Gobert], and I'm scared of top centers. So, I mean, as we saw tonight, it looks like I was very, very scared of him. So, yeah, keep talking," Embiid said. "But going up against [Gobert], one of my goals is to also be Defensive Player of the Year. So, you know, when you go up against those types of guys, he's a great player, and you know, he does a lot for his team that don't show up on the stat sheet, but when you go against those guys, you know, it brings something else to my game. I want to dominate."

"I want to dominate. On the offensive end, but mainly on the defensive end, because that's the goal I set for myself at the beginning of the year. And, also, obviously, I've got another one of my teammates that has the potential to be the Defensive Player of the Year, but those are the matchups that you want to go out there and just dominate and prove to everybody that, as a team, that we have a great team, and, individually, you should be up there when it comes to those rankings and stuff. So, hopefully, that can clear that up with Keith Pompey and Howard Eskin."

The beef appears to originate from a question asked in the aftermath of Philadelphia's first game against Utah, a game Embiid sat out for health reasons, in which Doc Rivers was asked whether he was concerned that Embiid was specifically missing games against other elite centers:

Rivers: I don't know, are you trying to say something, Keith?

Rivers:  It's a hell of a question.

This is not meant to mock a colleague who caught the wrong end of an athlete's scorn or someone who posed a question that eventually backfired on them. You could point to any number of personal takes I've had over the years that have been made to look ridiculous over time, I have just been fortunate enough to avoid being put on the Summer Jam screen by a player I cover.

No, this response to a weeks-old question-and-answer session is meaningful because of the headspace Embiid is in right now. This is not a player showing up to the arena and letting the chips fall where they may on a given night. This is a guy on a mission, consumed with the idea of winning and dominating opponents, taking anyone who dares to get in his way and lighting them on fire.

You could say Gobert was the guy who tried to do so on Wednesday night, but he had a hell of a time making the attempt. Deep into the first 48 minutes of play, the workload of two-way mastery draped on his shoulders, Embiid nonetheless took Gobert down to the block and threw him out of the way like a stack of brittle baguettes. Being able to hit a one-legged fadeaway like Dirk Nowitzki and throw a guy off your back a la Shaquille O'Neal in the same game is, for lack of better phrasing, alien shit:

Yet this is the Embiid we are seeing nightly in 2021. His bad games look like the good games of past years. His good games are now elite games, with his scoring putting him in rare territory for a big man. The last center to average 30 points or better for a season, which Embiid has managed halfway through this run, is the late, great Moses Malone, who managed the feat during his second MVP season with the Houston Rockets back in 1982. There's a long way to go, but with half of the season left, Embiid is approaching historic territory and has a great chance to win major hardware at season's end.

He has learned the art of politicking along the way. Aware that his health issues are held against him, Embiid does his best to downplay the conversation at every turn, as he did when he refused to reveal the nature of his mid-game trip to the locker room after the win over Utah. He understands that verbal humiliation of his opponents does not help make his case, so he has taken to highlighting the accolades of his slain foes while the dead body is still fresh, as he did when he mentioned Gobert's Defensive Player of the Year honors on multiple occasions Wednesday.

Mostly, he understands that he has to win. The goalposts have shifted for Embiid, who admitted Wednesday that he entered the league dreaming of the Defensive Player of the Year award because he never thought he'd be capable of aspiring for more.

"When I came into the league, I really thought, I never thought I would be that good offensively," Embiid said. "I always focused on the defensive side, and that's always been my goal to win it. It'd be nice to do it, but like I said, that's been my focus coming into the league, and obviously, the scoring and the offensive side has taken over. I keep going back to the same thing, you can't be in those conversations without winning."

Maybe that humble origin story is a ruse on the level of his (fictional) claim that he once killed a lion in his home country of Cameroon. This is a guy who rose to prominence thanks to post moves that reminded many of Hakeem Olajuwon, a kid who studied and idolized Kobe Bryant, and a player who flew past his peers so quickly that a severe deficit of experience was not enough to stop him from becoming one of the most impactful players in the league from the moment he stepped onto an NBA floor. Lack of self-belief has never seemed to be an issue for Embiid.

But that is sort of what makes Embiid so fascinating. He spent most of the 2019-20 season telling people he was trying to be more professional, swearing off social media and claiming trash talk was a thing of the past. The spicy tweets have been minimized, sure, but he is now in tune with what is being said about him to the point that he can namedrop anyone with the audacity to question him in the first place, justified or not.

He is more complicated than he tends to let on — a man with a small circle who often speaks softly that happens to be a maniac on the floor and in front of a small Zoom call of reporters. He relishes the comparisons to the greats, but he makes sure to reserve time to lift up his supporting cast. Fresh off of one of his true statement games in a season full of them, he reserved time to remind the press once again that Tobias Harris' All-Star case was still in his mind, with Harris carrying Philadelphia's offense in an excellent overtime run.

"I had a great fourth quarter, but as we started overtime, I kind of knew that Utah was going to send double teams to me, especially with the Defensive Player of the Year on me, so, you know, [Harris] made the first one and that's what we've got to keep doing. We were like, 'Just keep feeding him," Embiid said. "That's why I'm preaching for him to be an All-Star, because you look at nights like tonight, he dominated in overtime."

"He was absolutely unbelievable," Doc Rivers added on Embiid's performance. "Just got what he wanted when he wanted it, made the right plays, just so many little things tonight. When you think about the way Joel was playing, and then Tobias gets it going, and Joel wanted us to go there. That was a really big team win for us."

Is there an MVP trophy in his future? There's half a season of basketball left to make that determination, but Embiid (+225) currently tied with LeBron James for the best MVP odds, according to Unibet. Either way, it appears we'll have a front-row seat for more highlights, wins, and score settling before it's all done and dusted. Just do your best to avoid being the next victim of his revenge tour.