Joel Embiid is out indefinitely with swelling in his left knee

When it comes to the Sixers and what has been a pretty disastrous February on a few fronts, the hits just keep on coming. The latest bad news is that initially saying that franchise center Joel Embiid would miss four games after the All-Star game in rehabbing the bone bruise/meniscus tear in his left knee, the team announced that Embiid is out indefinitely with swelling (not "swellness").

Embiid is scheduled to undergo an MRI today:

Medical update (1/2):
•Embiid did not take part in shootaround after swelling in left knee. MRI today. Listed out indefinitely.

The Sixers also gave an update on the latest medical steps they're taking with Ben Simmons (bone marrow injected into his injured foot), as well as Jerryd Bayless (remember him?) and Tiago Splitter. 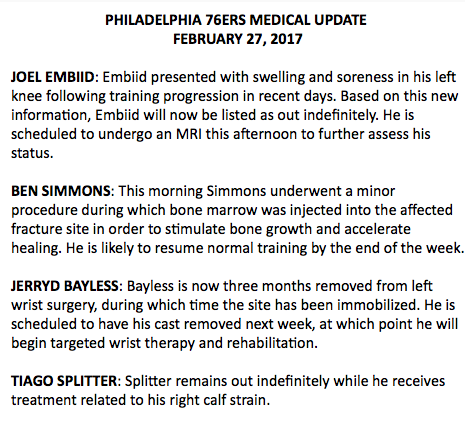 At this point, you really have to wonder if the Sixers will be without both Embiid and Ben Simmons for the rest of the year and if Embiid, once the frontrunner for the Rookie of the Year by a country mile, will see the award change hands (possibly to teammate Dario Saric) because he was only able to suit up for 31 total games in his rookie season.

For Embiid, a season that not so long ago brought so much promise in the form of nightly highlights (plus Twitter shenanigans) has again been halted by injury.