Stock up, stock down for young Sixers following Summer League 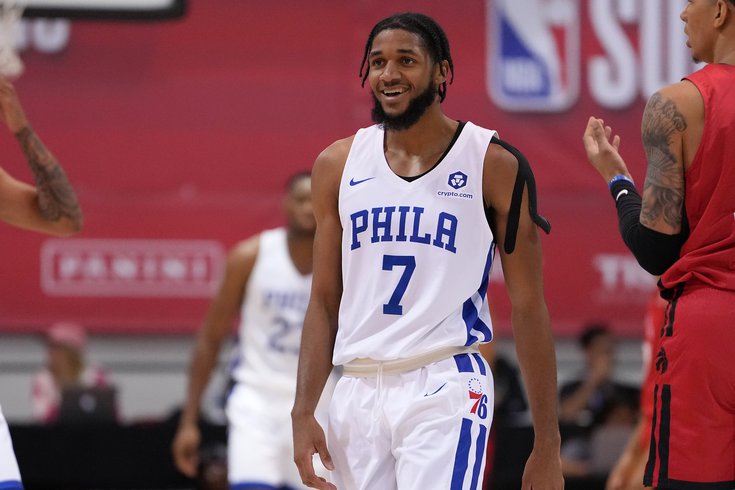 The Sixers' Summer League slate has wrapped up, and you'll be shocked to learn that they didn't have the next great superstar lurking on their roster. For a while there, offseason basketball was a marquee event on the Sixers' calendar (boy, isn't that a sad thought), but now the real fun happens when the games actually matter.

Nonetheless, let's check in with a few of the main players we kept tabs on throughout Summer League.

To borrow from Doc Rivers, playing well in Summer League does not warrant an Isaiah Joe victory tour. He had encouraging runs last summer and in the preseason last year, inspiring some to pencil him in as a surefire rotation guy, and that never came to fruition. But if he had struggled during his action this summer, his place on the roster would have been under scrutiny the rest of the offseason. Doing what everyone hopes and expects you to do is important, and Joe delivered the way a third-year player should in Summer League.

Joe's problem as a rotation option up to this point has been two-fold: he has not shot well relative to his reputation as a shooter, and the defensive toughness he has shown at lower levels has not manifested into results on an NBA floor. The former is a problem that is probably easier to look past because you can convince yourself that it's all about role and consistency. Joe's numbers aren't bad as a catch-and-shoot guy, they just haven't been spectacular. Joe shot 35.1 percent on catch-and-shoot threes his rookie year, and 36.4 percent last season. You could certainly convince me that increased reps and a consistent role will bring those numbers up, as I believe the shot quality will be high for any role player playing alongside the likes of James Harden and Joel Embiid.

It's the rest of his game that I'm wary to trust, and that Joe is not necessarily in a position to make up for some of those issues. This summer, he once again proved he's a willing defender, mixing it up with players much bigger than him and staying engaged throughout plays. Tying up rookie big man Christian Koloko on a possession in the post was one of the highlights of Summer League for anybody on the roster. But when he was called into action last season, Joe ended up in a lot of tough spots, taking some unnecessary fouls after stronger players went through or around him. If the shooting comes through, his defensive woes will be shrugged off — it's not like Furkan Korkmaz is prime Scottie Pippen out there — but putting on muscle will impact his success on offense, too, where Joe needs to be able to play through contact and make use of what should be a decent secondary handling package.

Barring roster changes, Philadelphia essentially has nine rotation spots that are spoken for. Embiid, Harden, Tobias Harris, P.J. Tucker, Tyrese Maxey, De'Anthony Melton, Danuel House, Paul Reed and Matisse Thybulle is a good first nine, with the possibility of moving Thybulle the only real threat to break up that group. That group has better defensive toughness, a bit more creativity, and more experience than they've had in the recent past. Anyone hoping to be the 10th man or a situational pick on some nights needs to bring a defined skill to the table. Joe's shooting would fit the bill.

When you only need to play two Summer League games before it is determined you are #TooGoodForSummerLeague, you've had yourself a nice outing. Bball Paul wasn't perfect in Utah, but as has been the case since he entered the league, Reed dominated a level of competition filled with guys who may or may not be NBA players. The only shame of it is that we didn't get to see Reed vs. Chet Holmgren, as that would have been marquee summer TV.

I don't think you're ultimately going to learn much about Reed in these settings anymore. The big question at this point is if he ends up being a basketball version of a AAAA player in baseball, too good to be in the minors but flawed enough that he can't carve out a consistent role in the big leagues. He did not look out of place in a playoff setting this past season and has been productive in limited minutes, so I tend to think he'll figure things out as he gains more time and experience. But as has been made clear, he will need to learn how to play with effort and physicality without putting himself in foul trouble constantly. So long as he does that, there's more than enough there for him to be at least a gadget player as a long, switchable athlete who can fly around the floor and be a defensive playmaker. Pick up an offensive rebound or two and you're off to the races.

If anything, Reed also benefitted because of how he compared to his current competition for a backup role, the guy we'll get to next.

Don't lose much sleep over anything Charles Bassey showed (or didn't show) as an offensive player at Summer League. If you're not a self-creator, the summer exhibition slate is not going to do you any favors. His game at the NBA level will be a simple, yet impactful one. Bassey is going to screen, roll to the basket, and finish above the rim if teams play too high against the ball-handler. In Vegas, where the collection of perimeter talent was iffy to say the least, Bassey was never going to be in the perfect environment for his own success. And still, he managed to have some decent flashes and knock down some jumpers, diversifying his game a bit.

The other end of the floor, though, was a pretty big disappointment for me. When Bassey managed to sync up his instincts and athleticism, he made some spectacular plays around the basket. But it was a roller coaster throughout their run this summer, with Bassey often taking himself out of position for rebounds in pursuit of shots he didn't have a great chance to block. Understanding when to soar high through the air and when to play with restraint is going to take some more time. I can certainly sympathize with the desire to block everything — if I was that tall and athletic, I'd be jumping around like a maniac just because I could — but good team and individual defense relies on picking your spots.

Bassey's problems as a young big aren't especially unique, but they do place him a bit further behind Reed in the pecking order than I anticipated heading into this summer. I'd still like to see him get a chance to play with Harden to see if they can exploit his rim gravity, but Reed is the clear favorite to be the backup to Embiid until/unless they add a vet to the room.

I don't think anybody underwhelmed more for the Summer Sixers than Springer, and I don't love how much we have to keep saying things like, "He's only 19!" to explain away a lack of progress up to this point. It's not that I think he's doomed to fail or that he should be a world-beater after a year in the G League, but I don't see what his path to a role is right now.

When Springer is able to keep the ball on his way to the basket, he has consistently shown the ability to play through contact and draw fouls, a huge plus for a kid his age. Unfortunately, getting there in the first place is a huge adventure possession-to-possession. Throughout Summer League, defenders consistently batted balls away from Springer on his way to the basket, not always leading to turnovers but frequently junking up Sixers possessions. His tendency to jump off two feet has also proven to be a problem at times, with Springer creating advantages and then giving them right back as he goes to load up for his jump. When you have issues getting the edge in the first place, you can't afford to give up the opportunities you manage to create.

None of this would matter as much if Springer was an able/willing shooter, but the latter part is perhaps a bigger issue than the former. Springer consistently stared down potential shot opportunities and took a while to size up jumpers, often clanging them well off the mark when he eventually let a few go. From time-to-time, you'll see him rise up quickly and knock down a three with confidence, lending hope that he can become a reliable threat with time and development. But that day is a long way off, I imagine.

Man defense continues to be a strength, but I was surprised by how far off the pace Springer was at times as an off-ball defender. This got better over time, so you could argue familiarity with teammates was part of the problem, but lapses in concentration often allowed teams to find open shooters or start a chain of swing passes to get an open three, plays that started with Springer missing a rotation. There's not a lot of room for him to underwhelm as a defender given the state of his offense, so this looms larger than you'd think.

He looks like a kid who is going to be hard-pressed to get any real minutes for this team. Springer being a longer-term project is something the Sixers signed up for when they drafted him, and as always, it's important not to overreact to Summer League one way or another. But it would have been nice to see a bigger step forward.