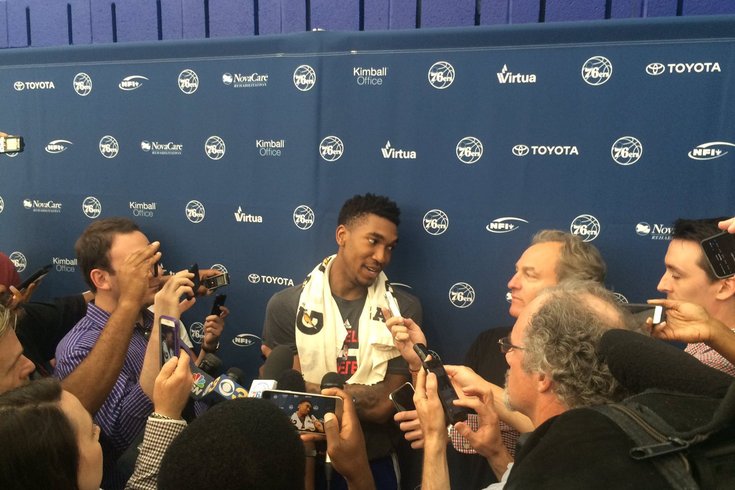 Malik Monk speaks with the media after his workout with the Sixers.

The Sixers worked out a group of potential second-round picks and undrafted players early on Thursday at PCOM, but the afternoon session was reserved for one guy and one guy only: Kentucky guard Malik Monk.

Here’s some of what I took away from watching the Sixers coaching staff put the Kentucky sharpshooter through his paces in Camden:

Sixers are really focusing on having Monk run off screens and making plays while on the move. pic.twitter.com/ECeCZ6XfBX

•    Forget Wanda Durant, the real MVP of this workout was Sixers assistant coach Lloyd Pierce, who chased Monk around screens for a loooonnng time. As you can see, the Sixers’ focus was to force Monk to create offense for himself with actions that Brett Brown and the Sixers frequently run.

In particular, there was a dribble handoff play from the corner that Gerald Henderson, Nik Stauskas, and Timothe Luwawu-Cabarrot ran quite a bit last season. At the end of the video above, Monk also runs an Iverson cut that the Sixers use in their offense.

“I think I was comfortable with whatever they put me through,” Monk said. “Knocked down a couple of shots, able to read off-ball screens, dribble handoffs, and stuff like that.”

This plan of attack was no accident. The Sixers know Monk can make catch-and-shoot jumpers, but they wanted to see what else Monk can do.

“We’ve seen him a good bit, recently in an agent pro-day,” vice president of basketball administration Brandon Williams said. “We know that he can shoot the ball, we’re excited to see that. But we wanted to challenge him in some other ways. This may be the first time that a shooter has done so much defense in a workout, but [it’s] really important to see a whole slate of skills.

Monk ran a lot of pick-and-roll, as well.

“We also wanted to see how creative he is with the dribble,” Williams said. “Watching Kentucky’s system, we know that he comes off pin-downs, he’s worked on the corners, he’s scored in transition, but could he do some things in tight spaces? We wanted to see him challenged by shot-blockers, we tried to simulate that a little bit.”

From the Sixers’ standpoint, the goal of this workout was fairly simple: try to make Malik Monk as uncomfortable as possible.

•    So, how did he do? Well, Monk certainly wasn’t shooting the ball at even close to the level of one of his legendary hot streaks, but again, the workout wasn’t necessarily designed for him to make a ton of shots. It’s hard to judge these things, but Monk’s general scouting report held up pretty well.

Here are two players already on the Sixers roster. pic.twitter.com/rsiG0srMia

•    As you can see, Joel Embiid and Ben Simmons were in the building for Monk’s workout, as was Robert Covington.

•    One thing that I didn’t know about Monk is how legitimately funny he is. Here are the answers to a couple of questions.

The strength of your game would you say is what? “Everything.”

How would you describe your passing abilities? “Amazing.”

•    I’m not sold that Monk should be the Sixers pick just because I don’t see quite the same upside as some of the other prospects in the Top-8 — He was ranked 7th on my Sixers big board — but his strengths and weaknesses seem to fit in extremely well with the Sixers roster.

“Ben’s here, he’s a great passer,” Monk said. “I can play on the ball, off the ball, and I think they need a shooter like me, a pass-first team.”

That’s it for today. Monk also confirmed what we already knew, that his good buddy and backcourt running mate at Kentucky, De’Aaron Fox, will work out for the Sixers in Camden on Saturday.