It took the professor a good while, but the final midterm grades are in. While the smaller players on the team got the news faster, the big guys had to wait around for a few extra days. Here goes nothing… 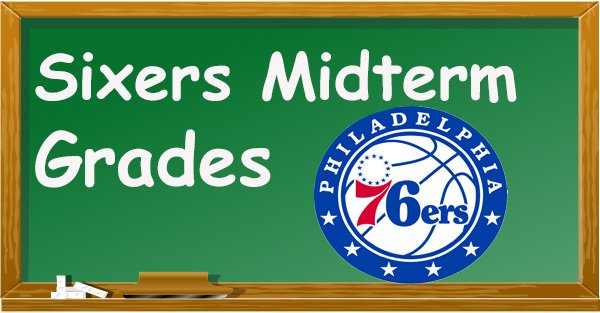 That is, as opposed to "fail." Remember when Matt Leinart’s academic schedule at USC consisted solely of ballroom dancing? That is Elton Brand right now, except he doesn’t even have to play in the games.

(I would say that Brand is being paid more than Leinart as well, but then again, that is hard to express with 100 percent confidence.)

As far as expectations go, having Holmes top this group feels like the right move. He has only appeared in 37 games, in part because Brett Brown doesn’t totally trust his defense (specifically, the rebounding) but mostly due to the fact that the Sixers frontcourt is crowded.

Among the 29 rookies that have played over 300 minutes, Holmes is sixth in win shares per-48 minutes (.132). On a team that has only won eight games, that is a pretty good number. Plus, he can tear down the rim with the best of them:

In terms of second-round picks who are trying to carve out a niche in the NBA, we are always looking for “an NBA skill.” With Holmes, it’s already apparent that he is an excellent finisher in traffic. It’s not easy to go up against NBA length and consistently score, but the Bowling Green product is shooting 74.3 percent at the rim.

For the spot duty that the 32-year-old forward has been limited to, Landry has been serviceable as a good midrange shooter and solid rebounder. Could he potentially be on the move at the deadline?

Considering Landry’s age and role on the team, this grade means a lot less than…

I have written more words about these two players than anyone else combined, so this explanation will be relatively brief. Okafor makes for a bad fit defensively with Noel, who is much better and more active at the 5. And Noel makes for a bad fit offensively with Okafor, because he can’t post up smaller 4s like Thaddeus Young (which leaves Okafor to deal with the better post defender).

Long-term, I lean toward Noel because I feel like his weaknesses will be easier to hide going forward. If Joel Embiid ever becomes a healthy and dominant player, the fit with either of these big guys still seems pretty tricky on the surface.