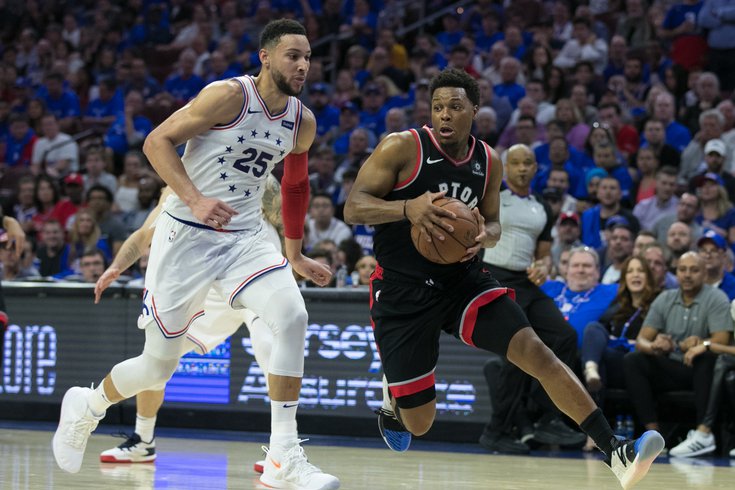 The Toronto Raptors, one of a handful of teams mentioned as a potential Ben Simmons suitor, reportedly rejected a trade framework that would have sent Kyle Lowry, Fred Van Vleet, and more to the Sixers in exchange for Philadelphia's star.

That's the word from Matt Moore of The Action Network, who had this to say about a potential deal in a pre-draft intel report:

Multiple sources confirmed Sunday that the Toronto Raptors have emerged as a team with “significant” interest in Simmons. One source close to talks said discussions have not been substantial as of yet. Multiple sources including those close to talks said a proposed framework including Raptors guards Kyle Lowry, Fred VanVleet, OG Anunoby, and the 4th overall pick in Thursday’s draft for Simmons was rejected by Toronto.  [Action Network]

Moore goes on to say that the Sixers are after Bradley Beal, a player we discussed in some detail late Monday afternoon. Setting that business aside, this is the first time we've even seen a hint of the sort of package that might appeal to the Sixers' sensibilities, rather than a low-ball offer coming from the other side of the table.

Lowry is a player we have discussed at length on multiple occasions over the last four to five months. As a pick-and-roll playmaker and trustworthy perimeter leader, Lowry would absolutely offer something different as an offensive player in the halfcourt for Philadelphia. Thehang-up has been about age — a Lowry for Simmons swap significantly shortens the title window for Philly. If the Sixers get one or two legitimate cracks at the title as a result of that sort of deal, you could argue it's worth it for that opportunity alone, but that's far from a certainty with the Eastern Conference roadblocks in front of them.

(One point to note as Lowry heads toward free agency — the Pelicans just cleared a pretty hefty chunk of cap space as reports swirl about their interest in chasing Lowry. Successful or not, a Raptors-Sixers trade involving Lowry would have to start with Lowry's interest in coming here and Philly's interest in paying him what he might command, which some rumors suggest will be in the neighborhood of $25-30 million a year.)

A deal that includes Van Vleet (27) and Anunoby (24) changes the calculus on such a deal pretty significantly, even before we get to the value of a top-five pick in this draft. The former is a versatile guard who can shoot off movement and run the offense for stretches, offering excellent defensive production that far outstrips his measurables. Anunoby is one of the league's most versatile defenders with a burgeoning offensive game — he has turned into a reliable high-volume shooter over the last two seasons — who would go a long way toward filling the defensive void left by Simmons.

You could understand why the Raptors would reject such a deal even if you're a big believer in Simmons. A move of this sort would undercut their ability to win in the immediate future with Simmons on board, which defeats a lot of the purpose of moving for him.

There's a different complication on Philly's end — the Sixers would need to make a corresponding move or turn this into an even bigger deal to make it possible under salary cap limitations. You could always re-route Van Vleet, but otherwise, the Sixers would have more money to move before they could even legally complete such a trade (to say nothing of the fight to get and stay under the apron following a Lowry sign-and-trade). Would they seek to find a trade partner for Tobias Harris instead? Maybe, but at that point you're basically talking about video game GMing, swapping entire rosters to try to make things work.

Daryl Morey is not a guy content to sit on the sidelines and has never been accused of standing pat, so maybe these are the sort of wild offers we should expect as trade talks continue to heat up this summer. Asking for the moon from Simmons suitors is where the team must start, even if they expect to land in a more "fair" middle ground for both teams. And on some level, perhaps it's a bit of payback after the Raptors wanted a fortune to part with Lowry at the deadline. There are a lot of men with long memories running front offices around the NBA.

Don't expect this to be the deal that gets done, but more rumors will be on the way in the days to come.