Sixers show no reverence for Nets ahead of big game: 'There's only one ball and you got to play defense' 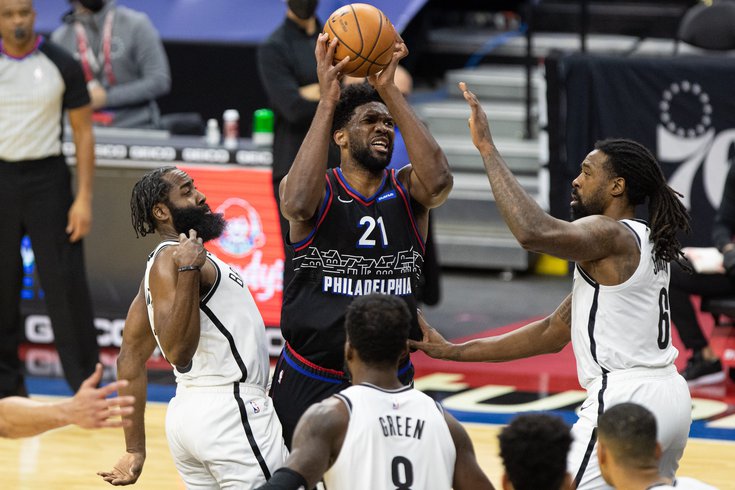 Wednesday evening, the Sixers play their final game of the season against the Brooklyn Nets in a game that could prove to be decisive in the end-of-year standings. Knotted up with a win for each team in the first two meetings of the season, Philadelphia can earn a critical tiebreaker with a win against their division opponent to close out the season series.

You would barely know the stakes if you were going off of what the Sixers have said about the game in the days leading up to it. Doc Rivers, for example, feigned ignorance that they were playing Brooklyn next, telling reporters he's a one-game-at-a-time guy after their win over Dallas. And Ben Simmons took it a step further, showing reluctance to project a future where Sixers-Nets is a premiere rivalry in the Eastern Conference.

"I mean, if they keep the same team, definitely, but it's going to be hard to do that," Simmons said following Philly's win over Dallas. "No, we're going for the past champs, the Lakers, you know, they were the ones who won a championship, so you got to give the respect to them. Obviously, Brooklyn has a lot of talent, but at the end of the day, there's only one ball and you got to play defense too. So we got to come in prepared mentally and physically."

That's as close as any Sixers player or staffer has come to providing bulletin board material for an opponent all season. And it's a fair enough stance to take as they remain neck-and-neck with the Nets after months of both teams doing almost nothing but winning.

"I mean, everyone is fighting to win the whole thing. That's all we're focused on, we're not focused on one team," Joel Embiid added. "If it's got to be Brooklyn, and we want to win the championship, we got a bunch of teams we got to get through. They might be one of them. So that's what we're focused on, we just focus on ourselves."

The strange part about this season series between two expected contenders is how little we know about what a series would look like between these teams at full strength. Philadelphia's loss to the Nets in early January has a case for one of their worst this season, with a rag-tag group of backups embarrassing the Sixers with Kyrie Irving and Kevin Durant on the shelf and James Harden not yet part of the team. Their February win over Brooklyn, a comprehensive 124-108 victory at the Wells Fargo Center, was missing the same Nets duo while Harden tried to buoy Brooklyn on his own.

This game, too, figures to feature an underwhelming group of Nets, for reasons on and off of the floor. Harden is not expected to play after suffering a hamstring strain last week, and Brooklyn has been forced into an unorthodox back-to-back after the Daunte Wright shooting in Minnesota prompted the postponement of their game on Monday night. The Sixers will head into the playoffs having never played the Brooklyn juggernaut at full strength, though that's true for most teams in the league, with Brooklyn's stars shuffling in and out of the lineup for various reasons over the past couple of months.

To the extent you can say this about a team with a first-year coach and a new-look roster, the Sixers resemble something closer to a finished product. They have a strong defensive identity, a relatively static cast of characters, and their deadline addition (whenever he finally suits up) was a relatively quiet if a solid move to obtain George Hill.

"We've been together," Embiid said Monday while discussing the team's defensive improvement. "The way everybody moves on the defensive end covering for each other, being in the right spots, guys being aggressive knowing that I'm behind or Dwight [Howard] is behind to protect the rim. That's what we've been doing and we've been great."

Brooklyn, meanwhile, has rarely had all three primary stars healthy this season, and their buyout additions of LaMarcus Aldridge and Blake Griffin inspired complaining from various organizations about the fairness of the buyout market, ridiculous and overstated as those claims might have been. Figuring out who they are and want to be is work in progress that might run through the start of the playoffs.

Even within that context, and even after sticking their chests out a bit verbally, the Sixers are quite aware of the stakes heading into Wednesday's game. Embiid has turned superteams, old rivals, and All-NBA talents into mincemeat this season, but with his eyes on the Larry O'Brien trophy at season's end, the big fella knows every advantage they can earn on the way toward a title will be critical.

"I think it's more than a regular-season game, there's a number one seed in play. We got a tiebreaker that we need, you never know. They've been playing well, we've been playing well. We've been winning games, they've been winning games. No one seems to want to lose any games, so you never know. We might have the same record at the end of the season, so having that tiebreaker is important for us. We really want the number one seed."

A win on Wednesday won't guarantee they reach that goal, but it's a big step toward making it happen.