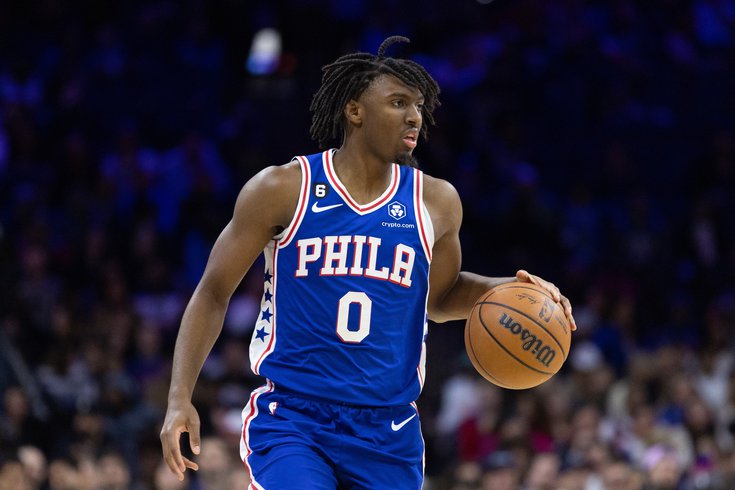 Tyrese Maxey has signed a new sneaker deal with New Balance's basketball division, the company announced on Wednesday morning, adding the up-and-coming Sixers star to a growing list of notable NBA players with the company.

Maxey, who was spotted in New Balance sneakers on-court prior to inking the partnership with the company, cited both his comfort in the shoes and the relationships established in the company as factors in his decision. Per Sports Illustrated:

"Honestly, New Balance has this family morale about it that I wanted really be a part of. That was one of the biggest things. It's a partnership. I haven't even been here long, and I just feel as if the partnership is growing day by day. They have helped me with so many different things - like they're available to talk on the phone all the time. That is something you don't ever see, and I really commend them for that, and I appreciate them bringing me along."

It's seriously a great shoe. That was one of my biggest things because you have to be able to do your job at the end of the day. The comfort level of that shoe - it kind of molded to my foot. Honestly, that was a really good thing. It's a light shoe, and I'm a guard that changes directions and has to perform on both ends of the court. [SI]

The 22-year-old guard joins a New Balance roster that includes Kawhi Leonard, Zach LaVine, and Jamal Murray, and he represents the sort of player a growing basketball brand wants to get in the fold — young, ascending, and charismatic. It's a good get for the hoops division, and a previous Sixers connection might have helped move that along. New Balance's current Head of Basketball Marketing, Desron Dorset, was the Sixers' Vice President of Business Development prior to leaving for New Balance in early 2021.

How does this impact the Sixers? The short answer is that it doesn't, so long as the shoes are comfortable and protective on Maxey's feet. The basketball sneaker marketplace is sort of a world by itself within the league, and the market leaders (e.g. Nike) are often able to get players signed to cheaper contracts because of the allure of playing in their shoes and following in the footsteps of guys like Kobe, LeBron, and so forth. Financial details of the partnership haven't been reported yet, but it's fair to guess he secured a bigger payday from a growing hoops department like New Balance than he would have received elsewhere.

And being one of the main guys at a shop like New Balance has appeal outside of on-court impact. One of the reasons Joel Embiid said he signed with Under Armour in 2018, outside of the massive payday, was the ability to team up with the athletic brand on charitable partnerships, as when Embiid announced an "In Memory of Arthur" Initiative last fall, pledging $1 million in grants to non-profits in the Philadelphia area.

What Maxey makes of the deal with New Balance is up for him to figure out in the years to come, but I hope we can all agree on one thing — a hearty congratulations to this young man on securing the bag. If he helps boost the New Balance profile, it will mean he's helping to lift the Sixers to new heights.