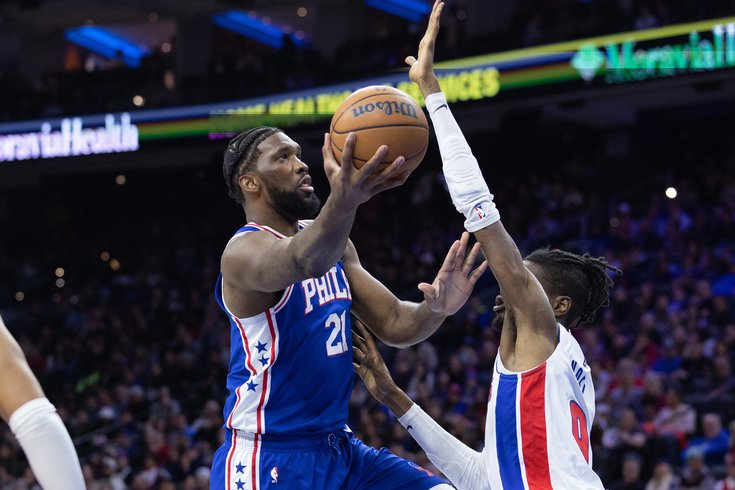 Joel Embiid managed the impossible on Tuesday night — he was both so dominant that the Sixers were able to get him out of a blowout win against the Pistons, and so dominant that they could not get him off the floor against the Pistons. The Sixers spent a couple of minutes in the third quarter trying to get Embiid out, their lead ballooning to more than 40 points, only for Embiid to draw another foul and put himself at the charity stripe.

Philadelphia's star man had one last burst of energy in the third quarter before watching the rest of the game from the sideline. Mission accomplished, as far as he was concerned.

"We didn't want to mess around," Embiid, who dropped 36 points, said Tuesday evening. "I don't know about my teammates, but I wanted to make sure that we're all together and on the same page, and that it was going to be a three quarter game."

The bigger story was Embiid being available to play in the first place, and the state of his health. The big man had missed the last three games as a result of what the team dubbed soreness in his left foot, sitting out wins against the Pacers and Pistons with a loss to the Bulls sandwiched in between.

It was not the first time this season Embiid missed time due to a foot issue. The big man missed a string of four games in late November, most notably in Ben Simmons' return to Philadelphia, after getting tangled up with Georges Niang in a loss to the Timberwolves on November 19th. He had a similarly awkward moment near the end of last week's win against the Pelicans.

Without offering an official diagnosis, Embiid offered Tuesday that those two issues/injuries were similar enough to lump together.

"I don't know if I did the same thing, but it's about the same thing," Embiid said. "Just got to manage it and basically go based off of pain and stuff."

Despite finishing his offseason in a battle with plantar fasciitis and now dealing with two different foot sprains/issues during the season, the big man has had little trouble getting right back up to speed after short layoffs. He dropped 30 in a win over Atlanta in late November to end his last four-game layoff, and he poured in 36 points in just 24 minutes against the hapless Pistons on Tuesday.

Every Embiid absence certainly feels like a big deal, given the run of form he is in this year (and over the last few years), but it has helped that the Sixers feel confident in their ability to win without him. Philadelphia is 7-4 when Embiid doesn't suit up so far this season, and while they were fortunate on the schedule draw for some of those wins, the fact remains that they've been able to persevere without him, buying him a bit of extra time to get right.

"Based on when it happened, I don't think I would have been able to play," Embiid said. "Still not fully [there], but that's just something you've got to manage, and over time it's going to be fine."

More blowouts like Philadelphia's win over the Pistons should help the Sixers split the difference, making the most of his gargantuan impact without exposing him to more wear and tear than necessary. Old-school load management, as Doc Rivers likes to call it, is the ticket to setting the Sixers up well in the standings while setting Embiid up for a healthy finish to the year.

The nightly postgame scene in the Sixers' locker room is always lively, with a vivid cast of characters chiming in on any number of random topics — Danuel House Jr. weighing in on the merits of Five Guys vs. Whataburger, Paul Reed discussing his sweatshirt side hustle, Montrezl Harrell chiding P.J. Tucker for being behind the times on rap music, you know, the usual. And there's always Embiid in the corner, feet on ice, towel over his head, NBA League Pass on his phone so he can catch the end of some other Eastern Conference games.

He is probably the guy who can most afford moments of levity in the locker room with the way he is rolling, but as he discussed his foot injury on Tuesday, he briefly recalled the injury-plagued path to get here, and why he wants to be out there even if perhaps he shouldn't.

"The thing with me is I just want to play," Embiid said. "Doesn't matter if I'm hurt or not, if I can walk, I want to play. Over the past few seasons, since I got to the league, I missed my first really three seasons, so I just want to be on the court as much as possible and enjoy it."

Fair enough. The missed games here and there may dent his case for year-end awards, and the ever-looming concern about health in the playoffs will linger. But if he's this good whenever he suits up, expect the cautious approach to rule the day until the postseason begins.