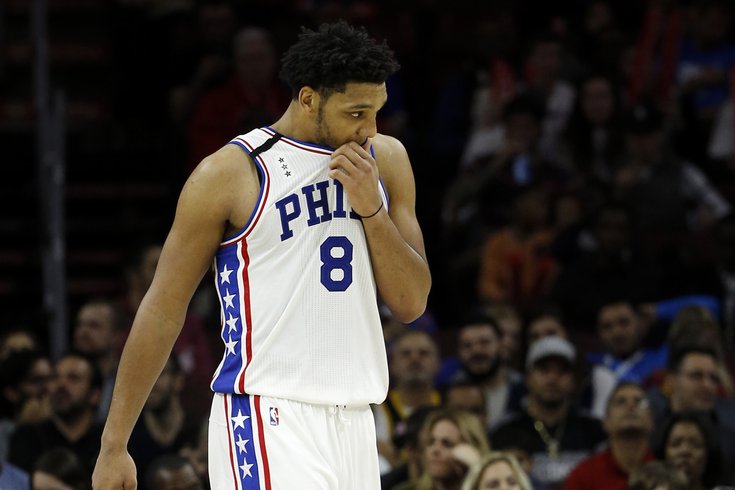 Just a few hours after announcing that head coach Brett Brown agreed to a two-year extension with the team, the Philadelphia 76ers went out and laid an egg at The Wells Fargo Center on Friday night.

It was Stars Wars night in South Philly, and the force was strong* with Detroit Pistons as they jumped out to a 24-point lead over the Sixers in the first quarter and held on to win, 107-95.

*I promise that's the last bad Star Wars joke in this post.

The Sixers managed to close the gap to four in the second, but fell behind by a dozen heading into halftime.  And when the Pistons opened the lead back up to 25 early in the third quarter, it started to become obvious the comeback was not going to happen.

In the end, it was a combination of their slow start and turnovers -- they had 20 of them through three quarters, leading to 29 Detroit points -- that lead to the Sixers losing their fifth-straight game and falling to 1-23 on the season.

Here's what I saw from my seat on press row:

•    The Sixers were playing the second night of a back-to-back, so it wasn't a huge surprise to see them get off to a slow start. But it was really ugly for the home team in the first quarter.

#Sixers losing by more points (21) than they scored (14) after one quarter.

•    Kendall Marshall saw his first action of the season for the Sixers and got the start for the Sixers. He played a limited number of minutes in his return from ACL surgery. He looked good in his first game back, finishing with five points (2/4 FG, 1/1 3PT), six assists and a rebound in 16 minutes of work.

•    In related news, PG Tony Wroten was a DNP Friday night. He got the night off to rest his knee after returning earlier in the week following ACL surgery of his own. Once both these guys are healthy, it will be interesting to see how many minutes are left for T.J. McConnell.

•    Jahlil Okafor and Nerlens Noel had their work cut out for them with Pistons big man Andre Drummond. Drummond played 32 minutes and finished with 18 points, 16 rebounds and four of his team's nine blocks. Meanwhile, Okafor and Noel both finished in double figures:

•    The Pistons starters PUT IT ON the Sixers. At one point early in the fourth quarter -- before it officially turned into scrub time -- they accounted for 84 of the Pistons' 94 points. At that time, they had combined to play 72 percent of Detroit's total minutes, but scored 90 percent of their points. They also accounted for 35 of the team's 40 rebounds, more than the entire Sixers team had at that point.

Don't believe me? Here's a look at the final numbers for the Pistons starters, who went 10-deep in their 12-point win.

By comparison, not a single bench player for the Pistons had a plus rating. The closest was was Reggie Bullock, who finished minus-five. After that was Aron Baynes at minus-15.

•    Philly native Marcus Morris had a solid outing in his hometown. He finished tied for a team-high 21 points in front of a large crowd of family and friends who stuck around after the game to see the former Kansas Jayhawks and Prep Charter standout.

•    After averaging over 26 minutes in each of his last four games, Nik Stauskas played just 22 minutes for the Sixers, with the majority coming in garbage time -- also known as the fourth quarter. In fact, through three quarters, Stauskas was only on the floor for 10 minutes. He finished with six points (3/6 FG) and an assist.

The Sixers have Saturday off before a three-game road trip begins in Toronto on Sunday. They'll then travel to Chicago on Monday and Atlanta on Wednesday before returning home to face the Knicks next Friday.