Plus, Embiid is expected to return for Wednesday's matchup with the Celtics 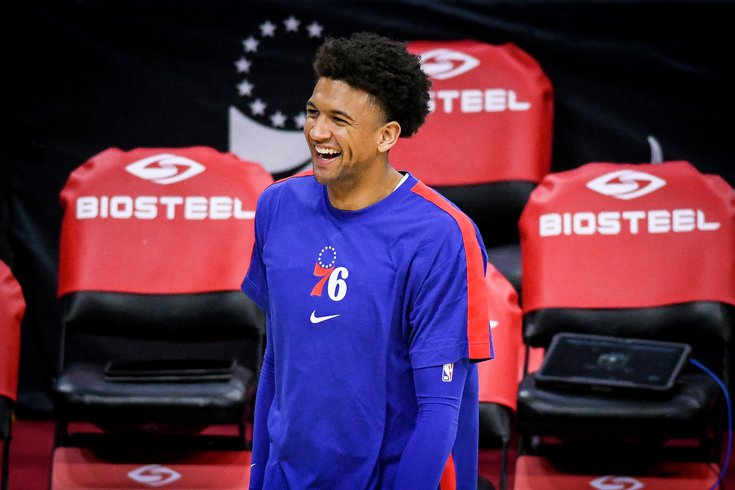 Practice time is in short supply during a normal NBA season, and it's just one more thing that has been taken away due to the impact of COVID-19. A condensed schedule has left the Sixers with little time to rest, let alone get on the floor and work together, and that has made life difficult for a team that is in the process of integrating a new team under a new coaching staff and set of philosophies.

Doc Rivers, who said late last week that Philadelphia had only introduced a "low percentage" of plays that he wants to get on the call sheet this year, knows that every day they can get on the floor together is an opportunity they can't waste. So the head coach said they may have been extreme during Tuesday's practice, savoring the chance to workout with close to a full group.

"Right now we don't have enough [plays] in to see where any of our guys are at, if you want me to be honest," Rivers said Tuesday. "We had a day today which was important, we worked on a lot of stuff, probably too much, being honest. But we had to, in my opinion, we had no choice...you're almost in the let's-try-to-win-a-game mode right now. And that's really not where you should be at in this part of the season, you should be working-on-your-execution-and-getting-better mode, and I think most teams are more in the thing I said first. Let's figure it out, see what we can do, and then keep working when we have time."

The team has already seen what sort of difference merely one play can make for the team. On the day of their first win over Miami last week, the Sixers spent shootaround operating out of a structure Rivers called "Delay," the goal being to get Joel Embiid the ball in the middle of the floor. They would end up leaning on that concept heavily in Embiid's 45-point performance that same evening, going back to that well repeatedly in the fourth quarter and overtime because the Heat couldn't stop it.

Having everybody available to even work on a play has been a big challenge for Rivers, who will likely still be without at least one starter for Wednesday. Seth Curry, whose positive COVID test set off a chain reaction for the team over the past couple of weeks, was not a participant in Tuesday's practice, a fact that was revealed by none other than Matisse Thybulle (thanks for the assist, kid.)

Rivers was thrilled to have as large a group as they had on Tuesday, and even that came with caveats. Embiid (knee), who was set to miss the full weekend of games before their date with OKC was postponed, was "in and out of practice" according to the head coach, though he is expected to suit up for Wednesday's meeting with Boston. Things have been so scattered for Philadelphia lately that they had to spend part of practice administering a coach's test for things they'd already gone over in the past simply to make sure they had nailed down certain concepts before adding or expanding concepts.

"We did a lot of skeleton stuff by calling out stuff and just to see if they could run it and [it was] probably average," Rivers said. "Some they could, some they couldn't, and I guess for the staff it told us what we didn't know, or what we did know well. So we had a chance to work on some of that."

"We're not one of those teams that have the luxury of being together for several years. We have so many new bodies, a new system, a new coach, everything. So to have all those games and no practice and then to have all those guys out, and even your shootarounds are not what you expect them to be, absolutely has affected us. I would love to say it hasn't but it's no doubt. You can see it today, trying to run simple actions that we couldn't remember or we had bad timing on, so [it was an] important practice. I don't know if it'll show results right away but definitely needed."

The only solace for the Sixers, and it's not especially comforting, is that chaos has impacted the entire league. Games have been postponed left and right since the start of the new year, with the Sixers on both sides of the undermanned roster equation already. It has created some downright wacky scenarios for a team less than 15 games into the year — a veteran like Danny Green needing to play 49 minutes in an overtime win over an eight-man squad is hard to wrap your head around until you see it play out.

In a strange way, that has created a leaguewide support system for Rivers unlike any he has experienced in the past. Conversations between rival coaches have surged this year, Rivers says, with people around the league trying to figure out what constitutes a normal way to run a basketball team. One specific example: coaches have debated whether it's still smart to hold shootarounds at all given the spike in positive tests, weighing the idea of just showing up for the game and letting the chips fall where they may.

Mental strain is a completely different challenge, as the Sixers learned over the weekend. They were all set to play Sunday's game against the Oklahoma City Thunder and took the floor for warmups before quickly disappearing into the bowels of the arena once the league passed the word on about postponement. Second-year forward Matisse Thybulle called it "madness" on Tuesday, but nonetheless something every person has to try to cope with.

"Everyone's trying to learn on the fly, and we're just adapting to things as they come to us," Thybulle said." There's really no anticipating or really truly being prepared because once it happens, everything kind of hits the fan and you just got to deal with what you have in that moment. I think we've done a pretty good job of working through those struggles that we've had so far and I think the league is working through it and just putting through more parameters to try and keep the players and the staff safe."

"It's kind of crazy just how packed our schedule is. There's no room for practices unless you're gonna take away off days and I feel like it's a hard thing for coach and them to have to grapple with is like, do we give them rest because they're about to play four games in seven days, or do we [practice]? And I think today was a really good opportunity to get out there and honestly just get better, get some feel for each other and start tightening up some things. It's like a pair of jeans, you wear them a couple of times start to loosen up, throw them back in the washer and tighten them back up."

Whether denim washing proves to be a pertinent comparison for navigating this season remains to be seen.

• While he seems certain to miss Wednesday's game against the Boston Celtics, sources have insisted that Seth Curry is nearing a return for Philadelphia, with some optimistic he will be back at some point this week. Having previously tested positive, Curry has to clear the league's health and safety protocol, which includes the following requirements before players can return:

My understanding as of late Monday was that Curry still needed to go through the two days of monitored individual workouts. I wouldn't start penciling him back in the lineup quite yet, but I do believe he is close.