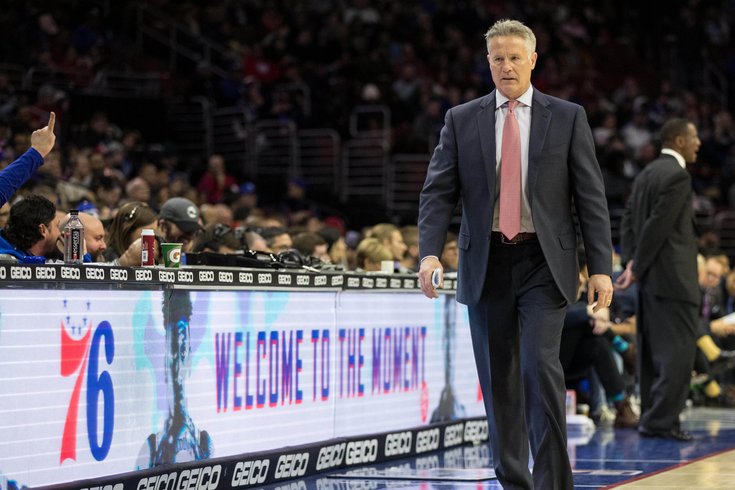 As one of the strangest and quietest searches for a general manager allegedly continues, the Sixers have decided to continue investing in their own people. Five members of the Sixers' brain trust received promotions on Monday, with several of those moves changing the day-to-day responsibilities of the personnel they have on hand.

We'll roll through these quickly by title, and then I'll help explain what they mean tangibly:

In the cases of Cohen and Rucker, a team source who spoke to PhillyVoice suggested their day-to-day roles remain mostly similar to what they looked like in the past, accompanied with the elevated status offered by new titles. One constant for the group as a whole, however: each person who received a promotion signed a new contract with the team, with the Sixers choosing not to disclose terms of the new deals.

The biggest shifts in day-to-day responsibility and/or role will come for Eversley and Brand.

Eversley, whose previous responsibilities entailed a lot of traveling and living on the road in a scouting capacity, will now spend the majority of his time operating out of Philadelphia. A Sixers representative told PhillyVoice Eversley will begin taking on a bigger role with what they called, "player relations," checking in with and talking to guys like Ben Simmons and Joel Embiid following practices, games, and the like.

Brand, whose sole focus in the past was the team's G-League affiliate, may ultimately be the biggest winner of the group. The former player will now dedicate time to the big league club and be part of the parent club's ultimate decision-making process, a source told PhillyVoice. The Sixers would like him to serve in some capacity as a "big brother" to their players — as he did when he was brought back late in his career — but the meatier part of the promotion is gaining input on front-office decisions for the 76ers.

(There was also a brief moment of confusion about Young's change. He will move up the bench following this promotion, effectively filling the hole left by Lloyd Pierce's departure.)

Prior to the Sixers announcing these changes, ESPN's Adrian Wojnarowski reported the moves alongside some comments from Sixers owner Joshua Harris, who insisted the Sixers will not settle for a sub-elite candidate:

"We prefer to find an elite talent who can lead us, but we aren't going to compromise," Harris told ESPN. "We have a skilled and stable staff who share the same vision under Brett. We prefer to find someone, but we don't want to feel forced into compromising."

The "under Brett" part of that quote is not insignificant. Under the structure that remains in place until/unless the Sixers find a candidate that suits them, Brett Brown will ultimately be the tiebreaker in the event it is necessary for decisions, a team source told PhillyVoice. Brown will ultimately be the decisive voice if one is needed before a decision reaches the ownership level for approval.

While some of these promotions are ceremonial as much as anything, they come with pretty serious implications as far as I see it. Strictly speaking, there was no real reason to promote a group of major players in your front office while in the middle of a search for a general manager. This is not to say the various players didn't deserve promotions, only that it muddies the waters as the team strives to bring in a lead decisionmaker.

"Who will survive from the Bryan Colangelo regime?" was an open question earlier this summer, and the Sixers have now made it clear most, if not all of the lead figures will stick around through a future GM change. That's not necessarily attractive to an outside candidate — even if they respect who the Sixers have on hand, this theoretical hire would have less input on hiring staff around them than the majority of people who are hired as GM's around the league.

It's also worth considering the message this sends about Brown's power within the organization. By promoting the idea that they're okay with keeping him in place as the head of the snake for the time being, the Sixers are sending a message (aware or not) that his voice and standing with the franchise continue to be significant.

Even if we set aside the generally disappointing track record of coaches as lead decisionmakers for a moment, there are red flags here. Whether the Sixers are targeting an "A-list" candidate currently running a team or an up-and-comer from one of the league's best front offices, it's fair to question if either of those archetypes would want to take the job knowing the head coach might have a larger share of power than is typical.

Couple that with the aforementioned inability to put trusted allies in positions of power, and you may already be robbing yourself of the ability to lure top talent. Top GM's are generally afforded larger shares of responsibility after proving their worth. In this setup, the Sixers are effectively asking said candidates to potentially have less say than they have elsewhere. And if they're not doing that in practice, they're at least sending that message with their public statements and actions.

Maybe that's an overly cynical view, and the Sixers structure in place paired with their top-end talent on the court will ultimately draw a special individual to run the show. Stranger things have happened. But if that ends up being the case, it will not be because the Sixers necessarily had the best process to get there.

And look, it's within the realm of possibility that this setup will work for Philadelphia. There are smart people in this group, and with Brown running the show at the draft they made a bold trade that runs counter to the usual thought process of a coach-led front office. We will see what this all looks like when the dust settles.

But NBA teams don't often have the good fortune of possessing two young cornerstones like Joel Embiid and Ben Simmons at the same time. The stakes are extraordinarily high to build a championship team in Philadelphia, and the fans here will not forgive or forget if that opportunity is squandered.