Sixers training camp notes, Day 1: Embiid fights through illness to get back on court 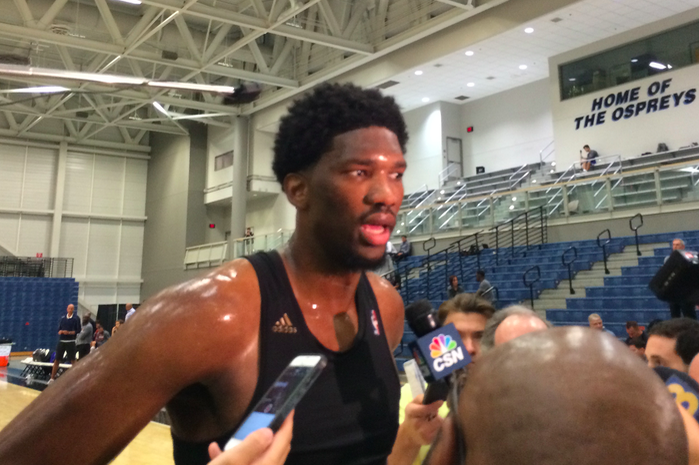 The first practice session of Sixers training camp at Stockton University in Galloway Township, New Jersey is now in the books. Here are a few things that we learned from the first time that the team took the floor (in an official capacity, at least) since last April:

•    Joel Embiid can’t catch a break, as he had flu-like symptoms at a team dinner at One Liberty Place with Will Smith (more on that later today) last night. Unlike the rest of the team, Embiid stayed in Philly last night.

But once he woke up, Embiid felt motivated to give it the ol’ college professional try.

“I don’t think I was supposed to actually practice today, but I woke up this morning and was like, ‘I waited too long for this time, so I got to try and get some work in there,’” Embiid said. “And that’s what I did.”

Embiid, who will practice again tonight, was on a 25-minute time limit for the day’s first session. He didn’t feel 100 percent, but Embiid thought he had a solid first workout. When asked about his teammate’s performance, Ben Simmons complemented his work on the offensive glass.

“I feel like I’m the best player on the floor, so I’m just going to do my job,” Embiid said. “I’m going to do what coach wants me to do, be a defensive piece and when needed to be a scorer, I’m going to be that.”

•    I got to watch the last 15 minutes of practice as the team was wrapping up a scrimmage. By that time, Embiid was on the sideline. Here’s T.J. McConnell getting buckets:

The two teams at the end were Jerryd Bayless, Gerald Henderson, Robert Covington, Simmons, and Richaun Holmes against Sergio Rodriguez, Nik Stauskas, Hollis Thompson, Dario Saric, and Jahlil Okafor. There’s probably nothing to read into that, but those were the players

•    Like most teams, the Sixers emphasized defense in their first practice. Many coaches prefer building their defenses from the ground up, but with such a young team, Brett Brown is taking a slightly different approach.

This training camp, a year after falling from 13th to 26th in defensive rating, the Sixers are working backwards.

“I think the mistake that I don’t want to get into is you can drill all day long, but at the end of the day, they have to know what the pieces equal,” Brown said. “So for me, I’m reverse engineering this and going more whole stuff and guarding ourselves with that basic philosophy.”

•    In very important news, Nerlens Noel was asked about the new hairstyle, specifically why he decided to go away from the signature flattop: “It’s still there, but it’s just tucked up” were his exact words. I kind of feel like there’s a better story behind the switch.

•    Brown said he has talked to Noel quite a bit about his general displeasure with the basketball situation. In Noel’s words, he and his coach “keep it real.”

•    Parking at Stockton? Not a particularly enjoyable endeavor.

•    After practice ended, the Sixers broke up into different groups and worked on some spot shooting drills. Here is one group (Embiid, Bayless, Stauskas) launching away from downtown:

This wasn’t the case for Simmons, who was working on his free throws at a side hoop with new shooting coach John Townsend. I asked Brown about Simmons’ different routine, and here’s what he told me about Townsend.

It’s interesting that the Sixers are starting the Ben Simmons Shot Makeover Project by getting the rook to focus on three specific shots, but then again, those do seem like areas from where he’s going to be operating frequently.

The team will again take the floor this evening with no media allowed to watch. We’ll be back here for tomorrow morning’s session.