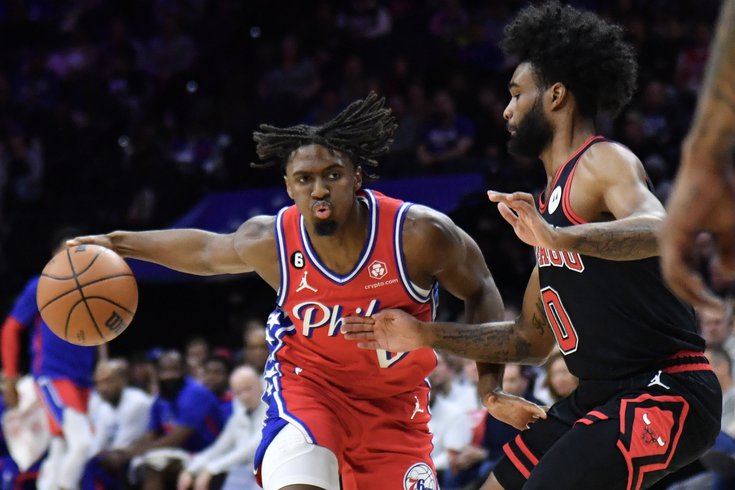 Nobody in Sixers gear left Wells Fargo Center celebrating a double-digit loss to the Chicago Bulls, and the speed of Philadelphia's exit on Friday night said everything about their performance. They were ready to put this one in the rearview as soon as it ended, and the NBA calendar is either forgiving or cruel in that way. Two days after this defeat, they go to work again.

There was at least one thing to celebrate for Philly, though. Tyrese Maxey finally looked like himself again, putting together his best night since returning from injury. 26 points, six assists, and three rebounds on 8/15 shooting qualify as a major success for young Maxey, a leap back toward the form he was in to start this season.

"I forgot how hard it was to play an NBA game," Maxey said after the performance. "These are the best players in the world, so it's extremely hard to get rhythm, get to your spots because guys are good. I think that was my biggest thing, trying to get rhythm and trying to flow, catch right into what the team has been doing.

"You can play against coaches and player development all day long, but end of the day, they're not in the NBA. They help, but playing against the real NBA players is extremely hard. It's that, the physical, and then the rhythm, that's really it. I'm still trying to get it back."

Maxey got it back early against Chicago, canning a transition three less than a minute into the loss. Pace, a constant talking point for Doc Rivers throughout this season, was in abundance early in the game. And no one is better suited to capitalize on that than Maxey, who doubles as their fastest player and perhaps the most dangerous guy to leave open for a three on the break.

Had the rest of the Sixers matched Maxey's pace from deep, they might have been able to keep pace with a Bulls team who shot the lights out from three, carried by Zach LaVine's electric 11/13 night from downtown. Philadelphia ran out of answers for him, or perhaps they never had one in the first place.

James Harden, who briefly came alive down the stretch in the fourth quarter, was off the pace, finishing 4/17 and truthfully looking much worse than that number suggests. He offered no excuses afterward and did not think Chicago's efforts were the cause of his problems.

"Tough night, felt like there was a lid on the rim," Harden said Friday. "Chalk it up, keep pushing."

Maxey's return-to-form was not just about his shooting. As Harden's final line will show you — and as we learned during the Ben Simmons experience — not all assists are created equal. When you share the floor with Joel Embiid, you can be the beneficiary of an elite shotmaking effort rather than an actively helpful playmaker, and in a lineup alongside Philly's tentpole stars, Maxey is rarely asked to create for others beyond basic swing passes and quick hitters on the way to the rim.

Leading some second-unit lineups without Embiid, Maxey had a chance to showcase that part of his game a bit more on Friday night. And his reads within those lineups may be a better indicator of his comfort and rhythm than anything else. In a nice stretch during the first half, Maxey did more than just make the easy reads, with a skip pass for a Shake Milton three in the corner arguably the best play he made all night:

He was the only player in the starting lineup to finish on the positive side of the ledger, due in part to how well things went when he was the alpha dog for Philadelphia's backup lineups. The Sixers have often struggled to score and survive with just Maxey out there to prop up that unit. Even if it came in a loss, this game marked progress on that front, with Philadelphia managing to add some breathing room that they would unfortunately squander.

Under the assumption they'll get Joel Embiid back shortly, perhaps as soon as Sunday, Maxey getting up to speed is a relatively big deal. They've had a starting group that is cooking with gas, a bench they've gotten decent performances from of late, and they're within striking distance of the East's top teams, even after the loss to the Bulls on Friday.

Can they get the most out of him without taking a step back as a group? With De'Anthony Melton in his place, Philadelphia has forged a sturdy two-way identity. But take it from the guy who filled in for Maxey during his extended absence — the Sixers are excited to have him back, and not worried for a second about whether he fits into what they have going.

"Tyrese is going to be Tyrese. Whatever he got, he's going to bring to the table," Melton said Friday. "We're ready for whatever. We love his aggressiveness, we love the way he shoots, and everything like that. We just want him to continue to do that, continue to be himself, and we'll be fine."