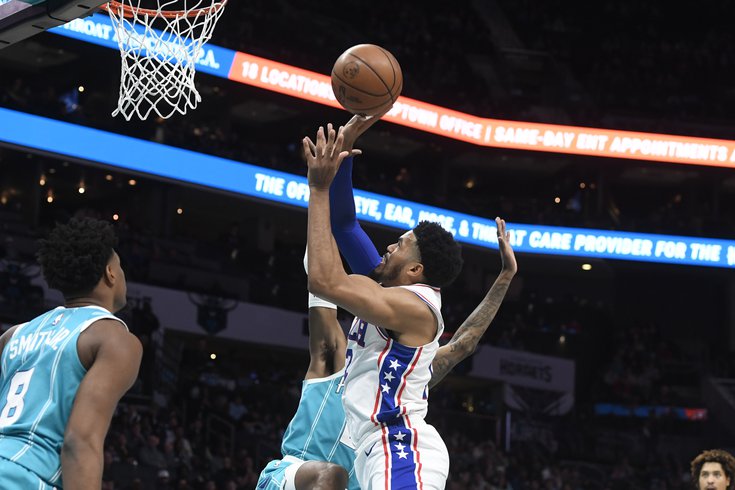 Sixers forward Tobias Harris drives to the basket against the Hornets in Charlotte.

The Sixers' fatigue caught up to them in the second half of a back-to-back, with Philadelphia dropping a 107-101 loss to the Hornets on Thanksgiving Eve.

• Shake Milton has fallen down the pecking order in recent years for a few reasons, but one of the big problems for Milton has been staying healthy once he does find form. Every time it felt like he was gaining steam last season, during a year where they needed all the guard help they could get, Milton picked up one knock or another, having to reintegrate himself in the lineup over and over again in an ultimately futile effort.

His best contribution against Charlotte was his playmaking because this is a team starved for creation of all sorts right now. Operating in the pick-and-roll, Milton seemed to constantly make the right decision with the ball in his hands. When Mason Plumlee sat deep in drop coverage, Milton settled into the pockets of space from midrange and got clean looks at the basket. Against more aggressive coverage, Milton was comfortable riding Charlotte players all the way to the rim before wrapping a pass around a body or two to a Sixers teammate. I thought this game featured some of the best playmaking we've seen from him in years, Milton sucking in so much attention that his guys got wide-open shots and dunks off of his passes.

But he has also made an effort to do the little things recently, often with excellent results. Timely offensive rebounds from Milton have led to big momentum swings for Philadelphia. When your guards are helping you dig plays out and extend possessions, it can be a backbreaker for the opponent, and Milton has made a number of those high-impact plays recently.

Who knows if they can continue to get his best as the stars return and his opportunities dwindle, but this has been an encouraging run for him and a great case to stick in the everyday rotation even after that happens.

• I love Danny Green and think his contributions were underrated while he was here, but I can't believe the Grizzlies traded De'Anthony Melton to Philly for a late first and Green coming off of a significant knee injury. Melton is a two-way contributor, as versatile as he is productive, and with the added bonus of being on a team-friendly deal. How do you let a guy like this get away?

Melton is not a perfect player by any means, but the "Mr. Do Something" nickname he picked up in Memphis is as fitting as any you'll find in the league. With their stars available to play, Melton's ability to cause turnovers was front and center, and his efforts in passing lanes and isolation defense created transition offense the Sixers otherwise struggled to get into. Now that they're short on guards, he has been asked to be a more active creator, and he carried the offense in the early portion of this game, unsurprisingly Philadelphia's best stretch of the night.

The outside shot was unkind to Melton in this one, perhaps because he had to be a pull-up shooter far too often, but Charlotte's tendency to offer space from midrange allowed him to get rolling on long twos, using the strategy against them on a series of made jumpers inside the arc. It's not a shot you necessarily want to live on when everybody's healthy and you can create better looks, but the Sixers aren't exactly spoiled for choice right now, and they should be happy Melton is ready to pull the trigger when precious moments of space are there for the taking.

Of course, the defense is still there on top of that. Melton came up with four steals in just the first half, darting through passing lanes and hustling back in transition to break up scoring opportunities for Charlotte. When Melton is in the vicinity, the ball is never safe in the hands of an opponent, and his ability to wreak havoc without getting into foul trouble has been a huge boost for the group this year.

• Paul Reed's competition for minutes behind Joel Embiid wasn't too shabby on Wednesday night, although Montrezl Harrell's contributions almost exclusively came on the offensive end. In these games without Embiid, having a pair of guys with wildly different skill sets has turned out to be a good thing.

For Harrell, success is not hard to look for or describe. Against Charlotte, he put relentless pressure on the rim, a frequent beneficiary of the work Milton did as a co-lead in the backcourt. Even when he couldn't get a shot to go down, Harrell did a nice job of setting up Hornets players for fouls, jostling and pump-faking until they had no chance but to wrap him up unless they wanted to let him score at the hoop.

His ability to score on self-created offense gives the Sixers a lifeline when their offense gets stagnant, and he'll need to do more of it if we're to ignore the oft-missing defense.

• The Sixers looked exactly how you'd expect a team to look on the second half of a back-to-back with a depleted roster, which is to say they struggled through a lot of this game with dead legs and tired minds. But it's a credit to Doc Rivers and the leadership left on the floor that they still kept battling late, trying to steal this one and build some kind of momentum in spite of the circumstances.

With every excuse to throw in the towel in the middle stages of the fourth quarter, the Sixers tried to dig deep and pull this one out anyway. After he personally accounted for multiple turnovers to fuel a Hornets run, Milton picked himself up and made some beautiful scoring moves in the closing minutes, bringing the Sixers within striking distance of an improbable win.

In the end, it was not enough, but there wasn't a lot to find fault with in this one. The schedule is just unkind sometimes.

• I don't think there's much to analyze in a negative light other than the Sixers being tired and undermanned on the second half of a back-to-back. They were the far better team early in this game, but once the fatigue factor began to set in, this was basically a dead-even game, which is not what you'd hope for against a dreadful Charlotte team.

For example, I thought the first half showed a version of Paul Reed slowly figuring out that he can be an impactful player without needing to fly through the air every time the ball is in front of him. With his length and athleticism, sliding his feet and positioning himself properly is going to get it done a lot of the time. On a play in the first quarter, Reed drew Gordon Hayward on a switch, and he did an excellent job of simply moving with him until Hayward made an unprompted mistake, buying a moment for De'Anthony Melton to swoop in and send the Sixers running.

His discipline began to fade in the second half, with Reed picking up a pair of fouls I would imagine he'd like do-overs on, one particularly bad one in transition where he gifted the Hornets an and-one opportunity by running into a finisher. We're talking about a guy going from a bit role to a sizable rotation spot in the span of days, so you're going to have to ride the roller coaster a bit.

(I want to be clear here: I liked a ton of what Reed did. By cutting out the extras and focusing wholly on the screen-and-roll game on offense, he is drawing help toward the rim and using gravity to open up their shooters. By putting pressure on the rim, Reed helped facilitate two wide-open threes for Melton in the first quarter alone, and a re-screen on Furkan Korkmaz's man at the end of the first allowed Korkmaz to bang home a pull-up three to close out the quarter.)

Foul trouble was another indicator of the group's energy level, with a number of guys (Reed, Tobias Harris, and Georges Niang) flirting with danger the entire night. It was Niang's reaching and poor positioning that ultimately hurt Philadelphia the most — he sat almost the entire second quarter and stretches of the second half because he couldn't stop fouling, and that left them without a valuable shooter on a night they couldn't get a bucket.

The biggest indication of fatigue, though, was that horrific shooting night from deep. A lot of jumpers were left short against the Hornets, their outside shooting nowhere close to the net-burning pace they set against Brooklyn. Good shooters, bad shooters, and non-shooters all struggled to find the range against Charlotte, leaving Philadelphia in a spot where they had to try to grind this one out down the stretch.

The will to win was there most of the night, but minds and bodies did not always cooperate. Not much you can do.

• P.J. Tucker is going to hit a shot eventually, right? I would have to imagine we're not going to spend the entire season wondering if he'll ever make a three or shot from four feet again. But man, it doesn't feel like he's even coming close on most of his attempts right now. The funk he is in has to be one of the worst, if not the single worst stretch of his career. And what's crazy is that his volume has been low enough that his efficiency numbers for the season are still pretty good because of the work he did alongside James Harden to start the year.

On cue, Tucker hit a corner three in crunch time. Hooray! They obviously need a few more of those.

• De'Anthony Melton must be shooting 10 percent or less on layups in transition this season. I'm making that number up, but that's how it has felt watching him attempt to finish at the rim on the break. One of the few blemishes on what has otherwise been a great start to his tenure here.

• The Sixers needed more than 19 points on 20 shots from Tobias Harris. But I will say that it's tough to expect efficient scoring out of him when basically all of his looks are on tough, self-created shots. Philly's guards did a good job making life easy on the bigs, but Harris didn't get much help.

• Second night in a row where a Sixers player (this time Paul Reed) had a bad injury scare only to stay in the game. These guys are truly living life on the edge at the moment.

• It was funny to listen to the broadcast refer to Charlotte as a young team at times throughout the game on Wednesday night. This is a team that started Gordon Hayward, Mason Plumlee, Terry Rozier, and Kelly Oubre. They definitely have young guys on the roster, but they're mostly just bad, not particularly young if LaMelo Ball is out of the lineup.