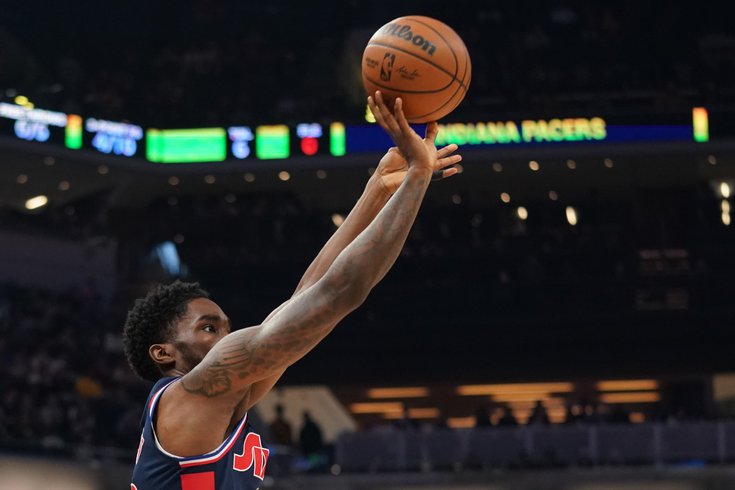 Shake Milton shoots a three during a record-setting night for the Sixers.

The Sixers made 23 threes to set a new franchise record against the Pacers, winning a 131-122 shootout where defense was optional. Joel Embiid (45 points) and Tyrese Maxey (30 points) led the way for Philly.

• The Sixers, infamous for their reluctance to shoot threes even when they're wide open, somehow managed to break the franchise record for made threes in a single game. Two guys led the charge for Philadelphia on that front — Tobias Harris and Tyrese Maxey.

Last season, both guys would have been frowned at for not letting it go more, and I'm not sure you even have to go back that far. One of the big issues this team had in the first half of the year was simply taking advantage of the open looks being created for them, and veteran players had to specifically encourage Maxey to trust his work and let the ball go.

Nobody needs to get in his ear anymore. Every type of three you could imagine a player taking, Maxey now has in the bag. He'll hit you with a stepback three while turning the corner in a dribble handoff, a side-step three while isolated against a defender, and catch-and-shoot attempts from all over the floor. Each one of those shots is important for a different reason. Maxey's ability to provide spacing as an on-ball guy is huge for his ability to anchor an offense from the perimeter, and his comfort as a catch-and-shoot player allows him to be a key cog in a high-level offense, even on possessions where he doesn't touch the ball.

His confidence is just so far ahead of where it was last year that it's almost hard to believe sometimes. Maxey pulling up for heat check threes in transition would have seemed like somebody else had possessed his body last season, but it's fitting given the growth we have seen from him this year. The time he got to run the team and live through his mistakes has paid massive dividends for the Sixers, who have a second-year player capable of stealing everybody else's thunder with blinding scoring runs.

You could almost argue that Maxey's second half was more impressive than the first for very different reasons. Instead of coming out of halftime and just throwing up anything/everything he wanted, Maxey played team-friendly ball instead, setting up quality shots for his teammates and picking his spots as a scorer. What an impressive kid.

• Speaking of stolen thunder, Maxey's outburst in the first half was almost enough to distract from the fact that Joel Embiid put up 27 points against a Pacers team light on options to slow him down. Much has been made of his free-throw attempts and their importance to his scoring output recently, most of those claims coming from opponents and opposing fans who have been on the wrong side of an Embiid beatdown. But Embiid proved an important point with the work he did against Indiana — don't foul him at your own risk, because he might just go nuclear on you.

Before he got going as a scorer, I thought Embiid was almost as good as a passer, feeling and reading pressure intuitively in the post. There was little wasted movement from the big man inside the arc. The second a Pacers player tried to commit to an Embiid double team, the ball was out of his hands and often already on the other side of the floor, leading to a metric ton of open shots. It's hard to rip the Sixers for not shooting better during a game where they burned the nets down, but he deserved at least a few more assists than he ended up with.

This deep in the season, working on the small details is more important than a box-score line and (in some cases) even the end result on some nights. Learning from mistakes and preparing to be your best self in the playoffs is all you want to accomplish in these games aside from avoiding injury. A good example for Joel Embiid — posting too far from the basket has been a problem for him at times recently, particularly when Embiid is in a pick-and-roll with Harden and the opponent switches it.

On one first-half possession, Embiid did an excellent job to step around that problem. With TJ McConnell on his hip in early offense, Embiid received the ball and wasn't happy with his positioning. Instead of plowing through McConnell, Embiid quickly found Maxey on the perimeter before sealing the much smaller McConnell for a deep catch, scoring with ease before the Pacers could even get in position to think about contesting.

It seems Embiid has lost any grip he had on the MVP award over the last month, with a string of high-profile losses denting his case for the league's top individual honor. Even if that's the case, he can still go out with a bang this season, and a chance to win the scoring title as a center does not come around often. Sometimes, he manages to make the tough stuff look impossibly easy, like so:

Embiid was so in the zone that he even appeared to jaw with Indiana's coaching staff and former Sixers assistant Lloyd Pierce, letting them know what he thought of their defense. This was an absolute beatdown from the big man.

• It feels unfair to Tobias Harris that he is this low in Tuesday's recap, because he was an essential part of the Sixers taking off as an offense against Indy, and he was one of the few guys who offered any effort whatsoever on the defensive end to start this game. Nobody really cared about the latter, given how incredible they looked on offense in this game, but I promise that I care, Tobias.

The three-point aggression is starting to become commonplace for Harris, and it needs to be a constant for Philadelphia if they're to get where they want to go by the end of this season. There are shades of the player Harris was once upon a time in L.A., with Harris confidently stepping into transition threes above the break in a way he has rarely done since joining the Sixers.

There were some quietly impressive moments for Harris as a passer in this game, too, with Harris using a pass fake to suck attention toward the paint and create an open corner three on the other side of the floor. His trepidation as an entry passer can be a big issue for Harris, but he has been a decent secondary playmaker for the Sixers lately.

• The Sixers broke the franchise record for threes made in a game on Thursday night, which you could argue is the only reason they won while playing such horrible defense. And while he mostly stayed in the background as a scorer, this game featured some absolutely beautiful passing from James Harden, who picked the Pacers apart as a passer in this game to an almost shocking degree.

Indiana could not figure out where to go or what to do in order to stop him from creating an open look for somebody. When they pinched him too hard, he threw lofted passes over the top. When they trapped Harden high, he quickly found the open man to keep the offense rolling. In transition, the Pacers got caught in no man's land, allowing Harden to find lob opportunities and kick-out passes that got the Sixers open layups and threes.

And yeah, the pick-and-roll with Embiid continues to be a cheat code even when the Sixers don't get a shot from one of those guys on the play. The Pacers were so concerned with Embiid and Harden coming down the middle of the lane that they abandoned Danny Green one pass away on the perimeter on a play in the first half, gifting him one of the most open shots he has probably had in his career.

• Matisse Thybulle not being able to make a layup on a night where the Sixers threatened the franchise record for made threes is a fitting commentary on the state of his offense.

• Harden needs to do more scoring when he's leading the bench units, or he shouldn't be leading them.

• I'm not sure there's a word in the dictionary to describe just how bad the Sixers were on defense in this game. You couldn't point to a single thing they did well for the length of a quarter, let alone an entire game, and it was an issue for every player on the roster, not individual guys who could be spotlighted or picked on.

Usually, you can point to weak links on defense and start with their issues while trying to explain what went wrong. But the Sixers would have needed anyone to try on defense to distinguish between their bad defenders and the ones who are supposed to tilt the floor in their favor. Embiid waddled around the paint with his arms at his side. Thybulle might have made a play or two with his gambling but blinded me with his missed layups so I supposed I could have missed anything good he did. It only got worse from there, because the rest of the group added that "don't give a damn" mentality with their own poor bases of fundamentals and tools, leading to an avalanche of easy looks for Indiana.

Even if their first-shot defense had been good, the bigger problem was Philadelphia's abhorrent approach to defensive rebounding, where they may have turned in the single worst effort in the history of Philadelphia basketball. An undermanned and not especially big Pacers team absolutely dogged them on the glass, and once again, this was a team effort. I love Georges Niang's approach to offense, but he is as carefree on the glass as he is about letting shots fly from deep, staring at the ball coming off of the rim as if destiny will be enough to earn the board. And that's a problem that plagues this team, with very few guys on the roster who possess the desire to either box out a man or actually go get a rebound.

This should have been a triumphant win where the Sixers starters got to hang out and chill for basically the entire fourth quarter. They were not able to because

I know I stress all of the time that backup center is/should be a small part of how we evaluate the job Doc Rivers is doing. But when this is the reaction the fans give when one of their players gets tossed from a game, perhaps somebody in the organization should take notice.

Come on, man. Enough already. Jordan getting ejected legitimately might have saved the Sixers from losing the game. If Rivers can't help himself, the front office needs to step in. This is out of hand.

• Lance Stephenson stopping to flex after he smacked Joel Embiid with his off-arm and got called for an offensive foul is perhaps the most Lance Stephenson moment of all time. What a doofus.