SNL highlights: Will Ferrell returns as English teacher going through a midlife crisis 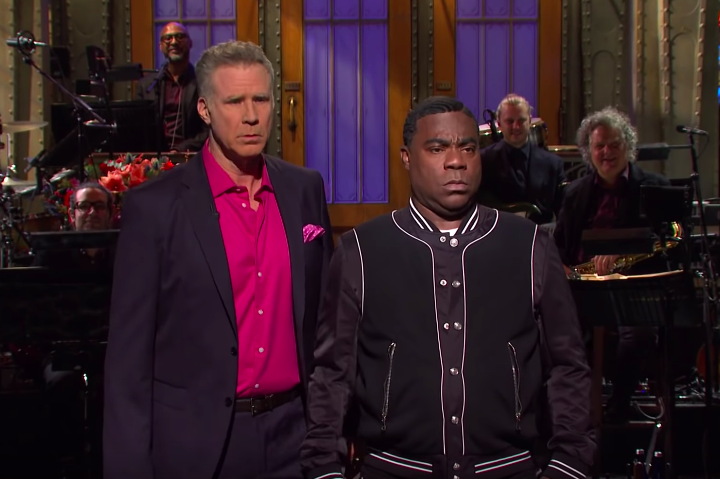 Will Ferrell returns to host 'Saturday Night Live' for the fifth time. He skipped doing an opening monologue about joining the 'Five-Timers Club' to fangirl over Ryan Reynolds. Tracy Morgan appears to talk up his former SNL cast mate.

Furthering his sketch comedy legacy, Will Ferrell returned to "Saturday Night Live" for a Thanksgiving episode full of celebrity appearances and that good ol' Ferrell humor.

Ferrell, who returned to host for his fifth time, skipped the usual "Five-Timers Club" monologue to give us something so much better — Ferrell fangirling over Ryan Reynolds. The "Deadpool" star is apparently a big fan of the comedian and, well, Ferrell just didn't know how to handle that.

Tracy Morgan stops by to give his former cast mate some confidence. He does get a little weird about it — noting he "suckled from [Ferrell's] bosom like a young Luke Skywalker" and it gave him "strength" — but we're all in for this bromance.

The night just kept getting better from a "Hienz" commercial about a moaning plastic bottle to the "First Thanksgiving" sketch starring Ferrell as Pocahontas' grandfather who gets his news from a fox.

Ferrell stars in "Cinema Classics" — a sketch that reveals an alternate ending from the "Wizard of Oz." In this scene, Dorothy tells everyone about her dream about Oz ... and, well, her doctor (Ferrell), who's vertically challenged, and a few of her other friends, who are also vertically challenged, wanted to know if they were in her dream too. Well, they are, and they're a bit offended to say the least about "Munchkinland."

Though the best sketch of the night might be a music video starring Mikey Day and Cecily Strong who are pumped about throwing the ultimate high school party. Everyone is there, including the jocks, goths, popular kids ... and even their AP English teacher? He's apparently having a midlife crisis, so, you know, he's handling this whole thing super well.

From his impressions of former President George W. Bush to Janet Reno, Ferrell has never been shy of playing politicians. He started off the all-new episode as U.S. Ambassador Gordon Sondland in the cold open before switching gears as Democratic candidate John Steyer in an all-star Democratic debate sketch that included Maya Rudolph, Rachel Dratch, Woody Harrelson, Larry David, and Fred Armisen.