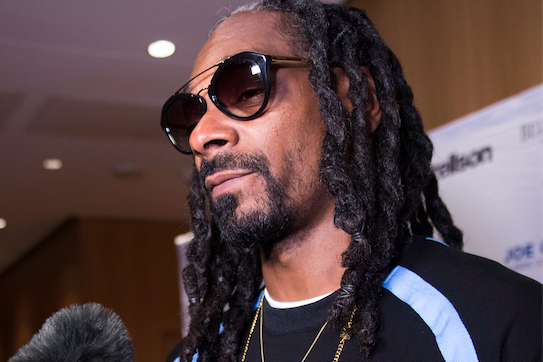 Snoop Dogg seen on the red carpet at the Joe Carter Classic after party at the Shangri-La Hotel on Wednesday, June 10, 2015, in Toronto, Canada.

Famed hip-hop artist and actor Snoop Dogg was briefly detained after a concert in Sweden Saturday night and has since alleged in a series of Instagram posts that he was a victim of racial profiling.

According to a report from People, Snoop, whose real name is Calvin Broadus, was detained on suspicion of illegal drug use and said that he was forced by Swedish authorities to submit to a drug test.

"They took me down there, made me pee in the cup, didn't find s---. No case no nothing. But like Minister Farrakhan say, 'It's better to be searched and not found with nothing than not to be searched at all."

Swedish authorities confirmed to People that Broadus was brought into police custody, but denied that race was a motivation. Police spokesman Chris Nordstrom stated that Broadus, a passenger in a vehicle that was stopped at around 11 pm, showed signs of intoxication.

"During the concert we had some officers around there, as we normally have because the concert was quite crowded there. According to the police officer, Snoop Dogg showed signs of drug influence, so he was taken to the police station for a test. After about an hour he was free to go."

Even though Broadus was not the driver of the vehicle, Nordstrom claimed the arrest was standard procedure. The results of the drug test will reportedly take two weeks and, if it comes up positive, the case will proceed as a minor drug offense that could result in a fine.

Snoop, who reached a plea agreement in 2007 on gun possession and marijuana charges, has vowed never to return to Sweden again.

The Instagram videos, which contain obscene language, can be viewed at People.