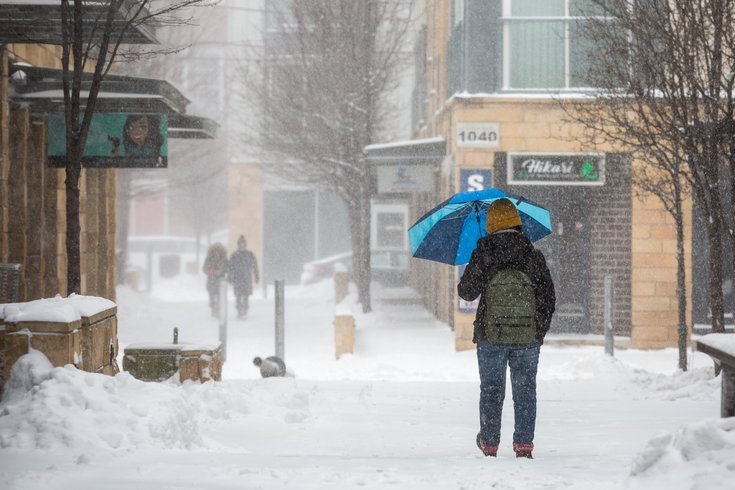 Snow covers city streets during a winter storm on January 4, 2018.

This much seems certain about the weather ahead this weekend: there's not a whole lot of certainty.

Two storms – the first weaker than the second – will impact the Philadelphia region beginning Thursday night and Friday morning, according to forecasters.

While the storm will bring snow to Harrisburg and northward to Boston, AccuWeather is forecasting a wintry mix that will slicken Philly-area roads and make travel difficult.

The National Weather Service, however, sees temperatures cold enough to support a snow event – with as much as 3 inches of accumulation – across much of the region, with perhaps enough warming in Cape May and southern Delaware for a mix and even a changeover to all rain.

But forecasters said there is potential along the I-95 corridor – and perhaps even the New Jersey Turnpike corridor – for greater accumulation.

Four inches of snow is possible in the Poconos before this first storm quickly moves off to the north on Friday.

The stronger, more significant storm is set to arrive here Saturday and stretch into Sunday. It seems certain that moisture will be plenty, but whether we see snow or rain or something in between – or all of the above – in our region is still very much up in the air.

AccuWeather sees the potential for a foot of snow from the Midwest to the Northeast with the worst conditions north of I-80, but perhaps as far south as the Pennsylvania Turnpike, which would include a good part of Philadelphia's northern and western suburbs.

It said cold air behind the earlier storm, plus the snow on the ground, could result in the stronger storm tracking more to the south, and taking more of a west-to-east path like last weekend's snowstorm.

But AccuWeather meteorologists also say they expect a surge of warm air at the height of the storm that is likely to bring rain or a wintry mix.

Then, a quick blast of cold air could mean a return to accumulating snow on Sunday.

The track and timing of the storm – as well as the extent of cold air – will ultimately determine who sees what out of this storm. As the AccuWeather noted in its forecast story:

"A difference of 50 to 100 miles may mean the difference between an inch or two of snow and slush to a foot of snow with this storm," according to AccuWeather Chief Meteorologist Elliot Abrams. "For that reason, all of the answers with snowfall for the Saturday to Sunday storm are not set in stone at this point."

For its part, the National Weather Service agrees with much of that scenario, but underscores the lack of confidence in the forecast at this point.

Later Sunday, a flash freeze seems likely as arctic temperatures and gusty northwest winds rush in behind the storm, bringing the most bitter cold of the winter so far thanks to a polar vortex. Temperatures will plummet into the teens and single digits so quickly clear that snow before it freezes solid.

Volunteers planning to be working outdoors Monday on projects as part of Martin Luther King Jr. Day will want to bundle up.

Here is the 7-day forecast for Philadelphia from the National Weather Service:

Wednesday night: Partly cloudy, with a low around 25. West wind around 6 mph becoming north after midnight.

Thursday: Partly sunny, with a high near 34. North wind around 5 mph becoming light and variable in the afternoon.

Thursday night: Snow, mainly after 10 p.m. Low around 29. Southeast wind around 5 mph becoming calm in the evening. Chance of precipitation is 100 percent. New snow accumulation of 1 to 2 inches possible.

Friday: A chance of snow before 10 a.m. Mostly cloudy, with a high near 43. Calm wind becoming west around 6 mph in the afternoon. Chance of precipitation is 30 percent. New snow accumulation of less than a half inch possible.

Friday night: Partly cloudy, with a low around 26.

Saturday: A chance of rain between 1 and 4 p.m., then a chance of snow after. Partly sunny, with a high near 41. Chance of precipitation is 40 percent.

Saturday night: A chance of snow before 7 p.m., then rain and snow between till 1 a.m., then rain after. Low around 34. Chance of precipitation is 90 percent.

Sunday night: Mostly cloudy, with a low around 10. Blustery.

Monday night: Mostly clear, with a low around 15.

Tuesday: Mostly sunny, with a high near 31.