So, Dikembe Mutombo knew the Sixers would win the lottery almost three hours before it happened

NBA draft lottery conspiracy theorists are going to have fun with this one for years.

At around 4:37 p.m. this afternoon, former Sixers center Dikembe Mutombo tweeted the following: 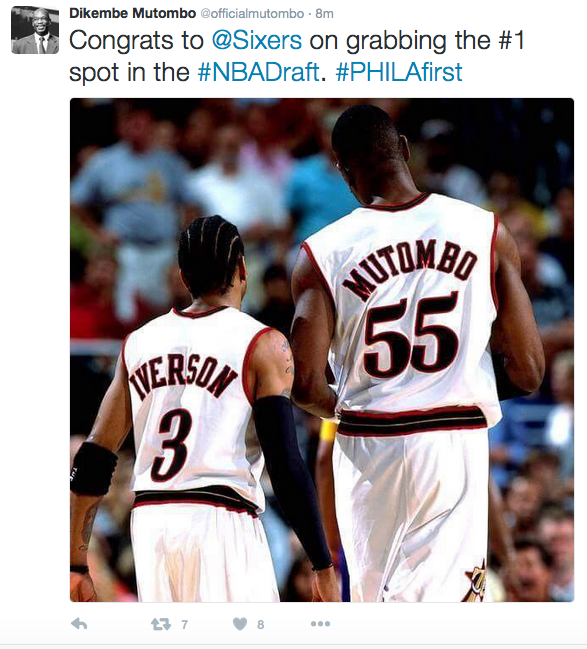 As everyone knows, the drawing hadn’t happened yet. This might have been a scheduled tweet in case the Sixers did in fact win, but it also will be interpreted that Mutombo might have known something. He quickly deleted the tweet, saying that he jumped the gun:

Sorry, guys.Got excited about the @sixers odds and got ahead of myself.Still keeping my fingers crossed for tonight. pic.twitter.com/u6bFaNTJml

Well, we now know how everything turned out. Deke, did you actually know something?

The actual lottery (you know, the drawing of ping-pong balls) is held in a separate room where each team sends a representative. Some media members are allowed in as well, and this year, that included the Daily News’ Bob Cooney. Nobody in the room is allowed to have cell phones or any other electronic devices that could potentially spoil the outcome.

As you can see, the Sixers didn’t land the pick until long after Mutombo’s original tweet was sent out:

NBA fans claiming that the lottery is rigged is a long tradition, one that dates back to 1985 (the first one ever held) when the New York Knicks won the right to draft Georgetown center Patrick Ewing. That the lottery was filmed this time around and will be released at some point won’t stop any conspiracy theorists.