The Arch Street mainstay will close after the weekend 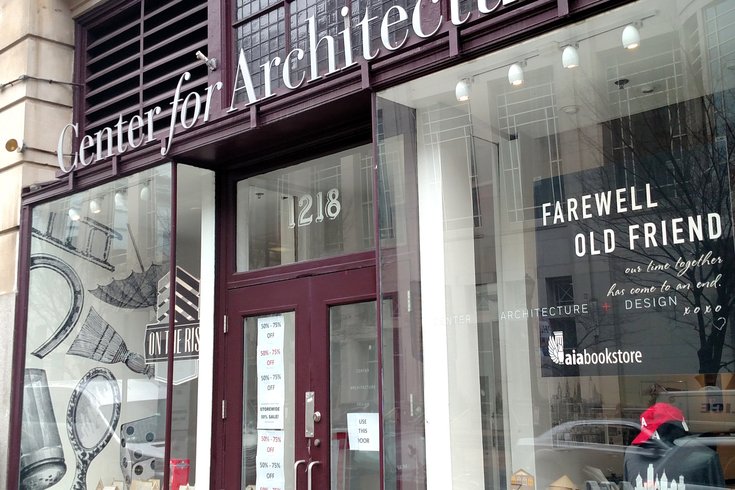 The AIA Bookstore, located at 1218 Arch Street, will close for good this weekend.

Crowds will shuffle in and out of the Pennsylvania Convention Center for the final days of the PHS Flower Show, and tall slabs of icy snow may still line Arch Street's sidewalk.

The real news from that sliver of Center City, however, is that AIA Bookstore is closing its doors across the street this weekend.

For 42 years, the physical, public arm of the American Institute of Architects - AIA Philadelphia, a chapter of the Center for Architecture and Design - has been a brick-and-mortar operation.

First, it was located at the corner of 17th and Sansom streets where the Hotel Palomar Philadelphia currently stands. In 2008, it moved to its current location at 1218 Arch Street.

The AIA Bookstore has long offered architectural resources, contract documents, theoretical tomes and codebooks to its members, along with quirkily unique home décor and gift items.

"The bookstore is beloved by so many people, especially the Rittenhouse space which was a much better location for us," said Elizabeth Paul, spokeswoman for AIA Philadelphia. "For years, people came to the store because its gift items rivaled that of MOMA's shop in Manhattan."

The Rittenhouse AIA Bookstore was a tower of power when it came to tony art-driven items, as well as being a gathering space for Philly's architectural elite and their aesthete pals.

"We didn't get quite the same volume of sales when we made the move to Arch Street," Paul said.

"We've sold mostly everything, so far, and will be here this weekend until it's all gone." --Elizabeth Paul

Online sales across the board topped those of brick-and-mortar locations, so it didn't take too long after the move for AIA Philadelphia to see the writing on the wall. Last fall, they turned the store into a Design Philadelphia pop-up shop in an effort to drum up attention.

"Even the rumors of us closing the bookstore was met with many an 'Oh no' and 'I love that store,'" Paul said of the reactions. "But the truth is, those same people weren't coming to shop."

Still, Paul said it was a difficult decision to bring about the bookstore's end, which came as AIA Philadelphia decided it was unwilling to foot the bill for a losing proposition.

In February, the decision was made to close the shop and sell off its remaining wares. They will be there selling what's left in the coming days.

"We've sold mostly everything so far, and will be here this weekend until it's all gone," she said.

There are two silver linings despite the brick-and-mortar's closure.

AIA will continue to sell limited amounts of items via its website, and it will still sell contract documents as that's from where the bulk of its membership sales is derived.

A number of gift items contracted by AIA Philadelphia - from local jewelry designers and artists - will also still be sold.

"I bought my niece and nephew all of their gifts there for birthdays and holidays," said Paul with a sigh. "I'm not sure where I'll shop for them now."

As for the physical space, the Arch Street storefront will be converted into a lounge area with rotating exhibitions from local furniture designers and members' art, as well as becoming a full-fledged event space available for rentals.

"Everyone who ever came in to the bookstore mentioned that the space would be great for a party," Paul said. "So, here we are."