U.S. Navy says sonic booms may have been caused by routine flight testing 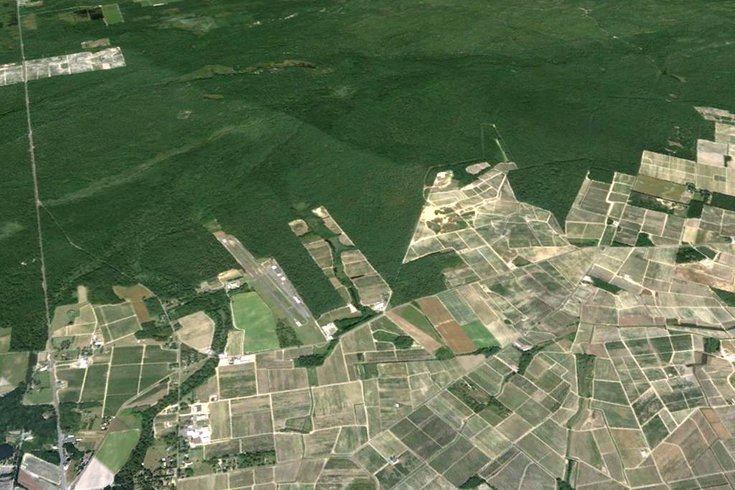 A sonic boom was felt about three kilometers north-northeast of Hammonton, at bottom of frame, about 1:24 p.m. Thursday, according to the U.S. Geological Survey. The Wharton State Forest is immediately north of the borough, at top.

The U.S. Geological Survey unofficially confirmed Thursday afternoon that multiple reports of a possible earthquake or series of tremors in counties along the New Jersey coast were attributable to a sonic boom that occurred in nearby Hammonton in Atlantic County.

According to the USGS, the M0.0 sonic boom occurred three kilometers north-northeast of Hammonton at 1:24 p.m. Thursday afternoon and extended as far north as Long Island.

The U.S. Navy issued a statement acknowledging that the incident was likely caused by routine flight testing out of Naval Air Station Patuxent River in Maryland:

Aircraft from Naval Test Wing Atlantic were conducting routine flight testing in the Atlantic Test Ranges this afternoon that included activities which may have resulted in sonic booms.

The test wing is critical to the safe test and evaluation of all types of Navy and Marine Corps aircraft in service and in development and is primarily based out of Naval Air Station Patuxent River, Md.

Other military aircraft, including both Navy and Air Force, also frequently use the ranges for testing and training.

An F-35C from Naval Air Station Patuxent River, MD was conducting supersonic testing in a cleared military flight area off the east coast earlier today. An F/A-18 aircraft accompanied the F-35C during the test.

As with all flight operations, the Navy takes precautions to lessen the impact of testing and training activities on the community. Military aircraft routinely conduct supersonic flights offshore in an area called the Test Track, which parallels the entire coast of the Delmarva Peninsula. Test aircraft from the naval air station execute supersonic flights almost daily in the test track, and most of these sonic booms are never felt on land. However, under certain atmospheric conditions there is an increased potential to hear the sound.

Earlier Thursday, in Mercer County, the Hamilton Township Police Department said it had received numerous calls about tremors in the area.

We are currently getting numerous calls of tremors/shaking in the area. The USGS is reporting no earthquake nearby.

Residents in Gloucester, Cape May and Atlantic counties reported sensations of the ground shaking, sometimes coming in a several waves, in their neighborhoods between 1:15-2:15 p.m.

"There was a sudden shake of my house around 2 p.m.," said Joe Weinert, a Galloway resident who was working from home Thursday afternoon. "The shaking was accompanied by a low muffled boom. I felt a couple of smaller shakes over the next 60 to 75 minutes. They were very subtle. If I wasn't attuned to it because of the phone calls and talk on social media, I might not have even noticed it."

Weinert said it was a much different experience from the magnitude-5.8 earthquake whose epicenter was in Louisa County, Va. but was felt across more than a dozen states and in several Canadian provinces.

"The rumbling in that earthquake lasted 20 to 30 seconds at a time," Weinert recalled.

Still, multiple South Jersey residents quickly took to social media to report what initially seemed to be a minor earthquake.

Was that an #earthquake in #NewJersey I just felt?

house just shook twice in #Brigantine, #NewJersey. #earthquake? anyone else at #JerseyShore feel it? #NJ

Adam Cattell, a Cinnaminson resident who was in Wildwood at the time of the tremors, said he noticed the tremors around 2 p.m.

"I felt the house shake for a second or two, then I felt it again two or three times in the next hour," Cattell said. "Nothing moved, but it was noticeable. I couldn't tell where it was coming from, but it was loud and I could definitely hear it."

In North Wildwood, Patricia Werkob said the incident didn't last long, but she definitely felt it.

"It opened our cabinet doors and shut them," Werkob said.

Mitchell Gold, an associate at Columbia University's Lamont-Doherty Cooperative Seismographic Network, told PhillyVoice that he and his team were looking into seismic activity in the area to determine what occurred. He suggested that a sonic boom was a distinct possibility.

"Seismic activity can be caused by air traffic from jets at offshore stations," Gold said.

When aircraft travel faster than the speed of sound, the resulting shock wave can create explosive sounds and vibrations in nearby areas. A sonic boom can sound like a giant thunderclap on the ground, potentially breaking glass and causing other damage if the aircraft is flying at a low enough altitude.

Earlier this month, on Jan. 1, the U.S. Geological Survey recorded a 2.07-magnitude earthquake in the Ringwood area of Passaic County. There were no injuries or damage reported in that incident.