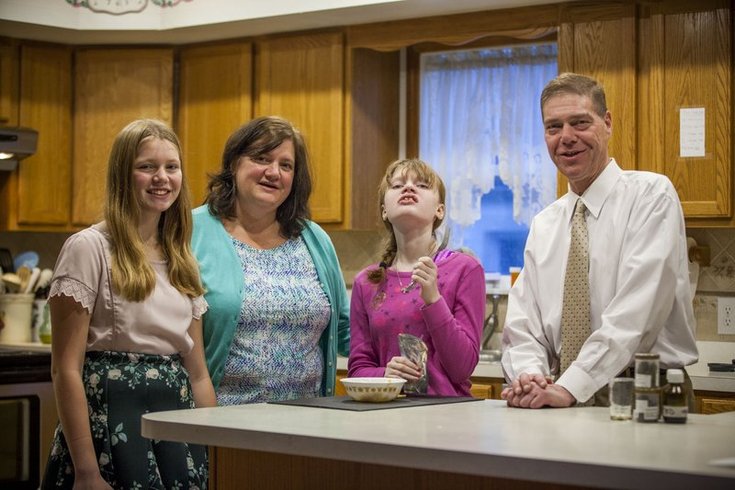 The Barbour family in their Maple Shade home.

A New Jersey father who fought to enable minors — like his daughter — the ability to take prescribed medical marijuana doses at school has died.

Roger A. Barbour, of Maple Shade, Burlington County, died Thursday at Our Lady of Lourdes hospital after suffering a heart attack at his home on August 27. He was 51.

A lawyer, Barbour successfully lobbied for a state law that allows developmentally disabled and sick children the right to use medical marijuana in edible doses in New Jersey schools. His daughter, Genny, 17, has severe autism and is subjected to epileptic seizures largely abated by medical marijuana.

New Jersey legalized medical marijuana in 2010. But the Larc School in Bellmawr initially refused to allow Genny to bring medical marijuana on school property. Barbour sued the school and fought for legislation enabling his daughter to use her medication — a drinkable marijuana oil concoction — at school.

PhillyVoice featured Barbour and his family in a story published last November. The family told how Genny's drugs enabled her to concentrate her limited cognition to form small sentences for the first time. When she said, "I love mamma," for the first time, the family cried.

Barbour was still fighting to improve New Jersey's medical marijuana laws when he died. He had lobbied for a bill that would permit a designated caregiver — instead of a parent or guardian — to administer prescriptions on school grounds.

"He was a loving and dedicated family man," Ken Wolski, executive director of the Coalition for Medical Marijuana in New Jersey, told NJ.com. "I'm sure that was the source of much of his strength. Roger will be sorely missed."

Barbour is survived by his wife, Lora, and his daughters, Genny and Marlee, 13. A Mass of Christian Burial was held in his honor on Saturday. The Mark C. Tilghman Funeral Home published an obituary online.

Full Disclosure: PhillyVoice Executive Director Lexie Norcross sits on the Board of Directors at the Larc School.