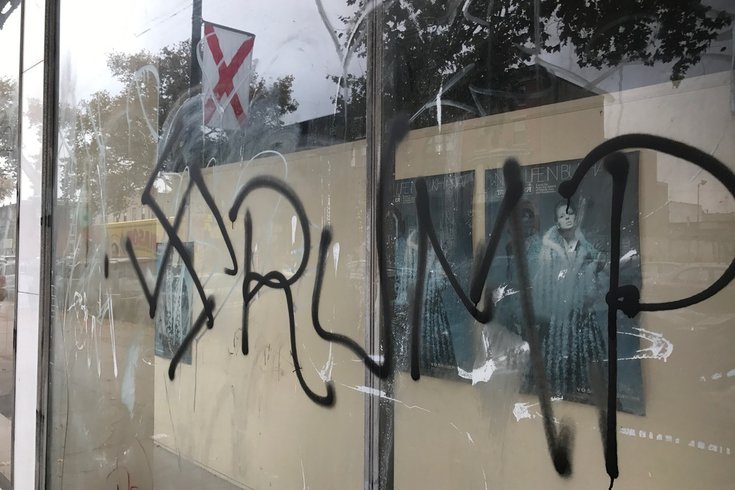 This photo shows a swastika as the "t" in the word "Trump" that was painted on the window of a closed business at 1300 S. Broad St. in South Philly.

A Bucks County school made headlines on Thursday after students reported several acts of vandalism and racial harrasment following the presidential election.

Students at Council Rock North discovered swatstikas drawn in several of the high school's bathrooms, including one accompanied by a paper sign reading "I Love Trump" and a derogatory remark about gay people. A Latina student also found a note in her backpack telling her to return to Mexico.

That news had just settled when a group of black students at the University of Pennsylvania said they were added — against their will — to a GroupMe message containing an image of a lynching and other racist content.

These acts mirrored similar racially-charged incidents reported at schools across the country in the aftermath of a divisive presidential election, prompting the Southern Poverty Law Center to urge President-elect Donald Trump to disavow all forms of bigotry.

"We all know the importance of leadership — the signal comes from the top," said Maureen Costello, the director of SPLC's teaching tolerance program. "Turning a blind eye to it and not acknowledging it is, in a sense, approving of it. In his victory speech [Trump] talked about being a president for all Americans. We're calling on him to back that up."

The nonprofit SPLC monitors the activities of domestic hate groups, from the Ku Klux Klan to the New Black Panther Party, and other extremists across the United States.

In April, the SPLC published an unscientific survey of some 2,000 K-12 teachers who described the impact the election season was having on students. More than half of teachers said they observed an increase in uncivil political discourse. More than one-third said they had seen a rise in anti-Muslim or anti-immigrant sentiment.

"Every indication we've had since then is that it continued and intensified during the election season," Costello said. "With the election over, we're following reports from all over. We're really scouring Twitter. We're also collecting incidents on an online form at SPLC. We've collected over 200 so far."

Costello expects to have a more definitive total number of anti-Muslim and anti-immigrant incidents by next week. But she urged school administrators to be proactive by mailing letters affirming the value of all students and stating a zero-tolerance policy for any racist or derogatory actions.

"Any disavowing that is done is better than none. It's very hard to harness something you've unleashed." – Prof. Kimberly A. Goyette, chair of Temple's Department of Sociology

The vandalism at Council Rock North was one of at least three racially-charged incidents reported at high schools in Pennsylvania.

In another, two York County students allegedly called out "white power" as they carried a Trump campaign sign through a school hallway, prompting Pennsylvania Gov. Tom Wolf to condemn the acts as "overt racism" and pledge to do everything he can to prevent such acts from happening elsewhere.

Mayor Jim Kenney on Friday quickly rebuked the incident at Penn, calling it "heartbreaking to see this type of activity here in the birthplace of our democracy and the city of brotherly love."

Racially-charged incidents that have been reported at schools across the country, but there also have been false claims, like one by a University of Louisiana at Lafayette student who reportedly fabricated a story that she had been attacked and had her hijab ripped off.

Such actions have not been limited to school settings, either. Someone spray-painted swastikas on the windows of a building on South Broad Street in South Philadelphia, in one case using a swastika for the "T" in "Trump." Philadelphia also has seen anti-Trump messages painted on other buildings.

Richard M. Cooper, a professor at Widener University's Center for Social Work Education, said such incidents should not come as a surprise following an election that featured a single strategy implemented by both parties — attack. He predicted there would have been similar acts had Democratic candidate Hillary Clinton won.

Cooper compared the presidential race to the OJ Simpson murder case of two decades ago, in that the campaign messaging essentially set up two binary options — right or wrong. The reality TV-style debates and dialogue, which spewed attacks on character rather than a critique of policies and issues, heightened that effect. As did social media, where like-minded congregate, affirming their stances.

... [W]e live in a society where people are unprepared to tolerate difference. We see critical parts in our history where we see that escalate in certain acts, and then we become surprised." – Prof. Richard M. Cooper, Widener University

"I think you see imitative behavior," Cooper said. "The other piece ... it's that we live in a society where people are unprepared to tolerate difference. We see critical parts in our history where we see that escalate in certain acts, and then we become surprised."

People need to be taught how to engage in civil discourse, Cooper said. That's what President Barack Obama and Trump, in their post-election remarks and meeting Thursday, attempted to create.

"If you look at what President Obama and Mr. Trump did, they modeled civility," Cooper said. "They couldn't have liked one another, but for the public, they modeled eloquently. ... They are doing an admirable job, love them or hate them. But people don't work that way."

It will be difficult to reverse the impacts of an 18-month election season.

Kimberly A. Goyette, a professor and chairwoman of Temple University's Department of Sociology, said Trump essentially gave people permission to say whatever is one their mind, regardless of the subject matter.

"I think the accumulative effect of hearing it over and over, without a strong enough response, just heightened it," Goyette said. "Hearing it once, you're shocked. Hearing it 10 times, it becomes acceptable. Having it repeated in the media, people come to see it as a more normal way of speaking."

Even if Trump denounces the racist incidents seen in schools across America, as the SPLC has urged, Goyette said it may not be enough to stop them from happening.

"Any disavowing that is done is better than none," Goyette said. "It's very hard to harness something you've unleashed."