Look out, Philly could be facing a spotted lanternfly invasion

Philadelphia's worst nightmare may be spreading to eat our trees and plants, damage our outdoor furniture and test our futile attempts to mitigate its onslaught.

Multiple reports indicate the the spotted lanternfly is becoming prevalent in various locations in downtown Philly, according to a Facebook post from the Philadelphia Parks and Recreation's Tree Philly program.

Another Reddit user posted a photo of a lanternfly in Center City, prompting commenters to note an infestation in nearby Chester County's French Creek State Park. Others have reported sightings in Radnor as well.

The spotted lanternfly is believed to have arrived in Berks County in 2014, likely on a boat carrying goods from Asia. Officials say the pest, which is native to China, Bangladesh and Vietnam, could potentially be the most destructive invasive species ever to arrive in the United States.

In Philadelphia, the insects were first spotted by officials in late October 2017. The city was placed in a quarantine zone encompassing more than a dozen counties in southeastern Pennsylvania. Their growing presence on city streets is not a good sign.

Working with Penn State University, agriculture officials have spent more than $20 million this year on research and eradication efforts, fearing other states will fall prey to a broader U.S. infestation. Colonies have already appeared in New Jersey and northern Virginia.

Environmental officials recommend homeowners take measures to catch the pests by wrapping sticky tape around trees. When the flies crawl up tree trunks, they become stuck in the tape. Some say using essential oils like spearmint or peppermint will help attract them to the traps, but the risk of using sticky tape is that it can also wind up trapping small birds and other beneficial insects.

"If you see egg masses, scrape them off, double bag them and throw them away," says the Pennsylvania Department of Agriculture. "You can also place the eggs into alcohol or hand sanitizer to kill them."

At rest, spotted lanternflies are 1-inch long and 1- to 2 inches wide. Immature nymphs are black with white spots and develop red patches as they grow, as seen below: 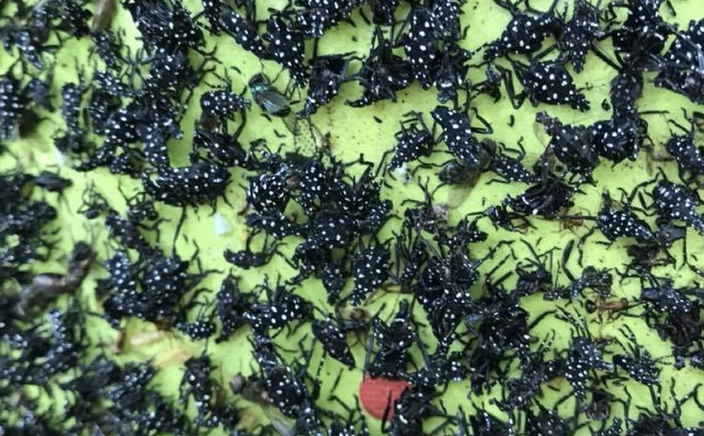 If you happen to see a spotted lanternfly in Philadelphia, don't hesitate to kill it—but maybe take a picture first and send it to Badbug@pa.gov.