Wife of man who ran off with teen was 'jealous,' doesn't think relationship was sexual 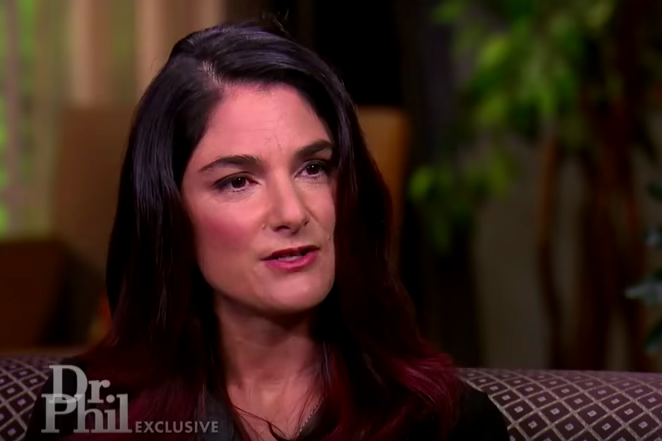 Stacey Esterly appears on 'Dr. Phil' to discuss the relationship between her husband, Kevin Esterly, and 16-year-old Amy Yu. The pair ran off two Mexico together in March and were discovered more than a week later.

Stacey Esterly says she doesn't think the relationship between her husband, Kevin Esterly, 45, and Amy Yu, 16, was sexual, but she does admit she was "jealous" of the pair.

Stacey Esterly appeared on "Dr. Phil" in an episode that aired Thursday. Her husband was arrested in March after allegedly running off to Mexico with Yu for more than a week, sparking a search that ended with U.S. and Mexican authorities locating the couple in the resort town of Playa del Carmen and Kevin Esterly being charged with interfering with the custody of a child.

Details about the relationship between Kevin Esterly and Yu, both of Allentown, were revealed after both disappeared on March 5. Kevin Esterly is the father of one of Yu's friends and she would reportedly often accompany the Esterly family on vacations.

In February, it was discovered that he had checked the teen out of her school, Lehigh Valley Academy Charter School, nine times in the last year, and that he was listed as her stepfather on school records. Kevin Esterly was barred from school grounds and arguments arose between him, his wife and Yu's mother.

Stacey Esterly said on "Dr. Phil" that before the pair ran off together, a moment on one of their family vacations raised an alarm bell. She said she was inside with their daughters, but Kevin Esterly and Yu were instead down at the beach taking photos together.

"I remember getting very upset with him, because, our girls are back here I'm back here, but you're down on the beach with Amy," Stacey Esterly said.

"Like a couple?" host Phil McGraw asked. "Absolutely," she responded.

"I was very jealous, and I've been jealous for the last eighth months, because I'm his wife and I wasn't getting the attention that I should be getting. Amy was getting more attention than myself," Stacey Esterly continued.

Stacey Esterly said Yu previously treated her like a mom. But once she confronted the teen about her relationship with her husband, Yu's attitude changed.

Stacey Esterly maintained that she doesn't think the relationship between her husband and Yu was sexual.

"I did question it once to him and to her," she said.

Both denied it, and she doesn't have any proof that their relationship was sexual, Stacey Esterly said.

"In my heart, I don't want to believe that they were sexual, and I'm hoping that this was just infatuation with him trying to help her as a father figure," she said.

Stacey Esterly admitted that, considering the apartment, she was probably being a bit "naive" about their relationship not being sexual.

Kevin Esterly was jailed on March 25. Stacey Esterly said she filed for divorce, and when he eventually called her from jail, he didn't apologize but said he would explain himself once he was released.

Kevin Esterly and Yu were allegedly able to finance their trip by stealing money from their families. Stacey Esterly said her husband took $4,000 out of her account, leaving her with just 28 cents.