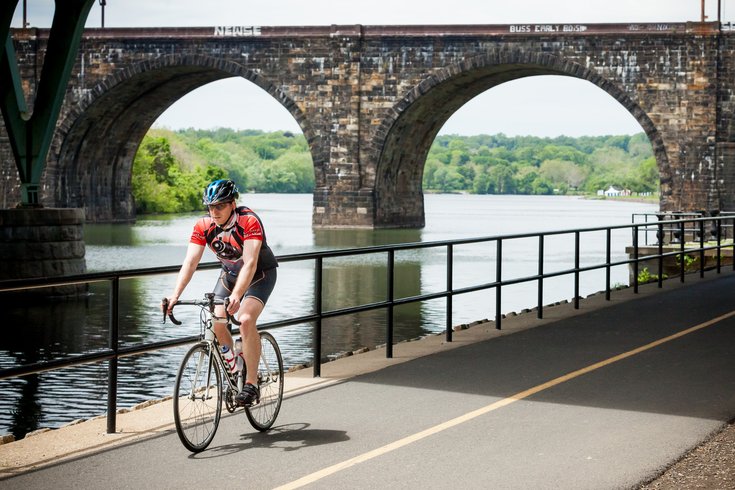 A cyclist rides along the Schuylkill River Trail near Girard Avenue and Kelly Drive, where at least one reader thinks they belong instead of in the street.

The Schuylkill River Trail (SRT) was recently named the Best Urban Trail in the United States. Those of us who run, bike, stroll and hang out along the Schuylkill Banks and Kelly Drive couldn’t agree more.

For many SRT users, the trail ends at Falls Bridge or earlier, but that’s cutting it short. Do it right and the trail can take you all the way to Phoenixville — and beyond, thanks to new and upcoming connections.

For now, though I’m going to guide you through some of the tricky spots on your way to Manayunk and Conshohocken.

Want to follow along on a map? Just check out this route I created on Ride With GPS.

Any old bike will do the trick on this trip, from a cruiser to a fixie to a road bike to a mountain bike. That said, you will encounter a two-mile stretch of fine gravel road along the Manayunk Canal; if you’re not comfortable putting your ultra-skinny road tires to the test like that, opt for something wider.

Let’s start you on the Schuylkill Banks. Maybe you rode down from the South Street Bridge; maybe you crossed the tracks at entrances at Locust Street or Race Street. Once you’re on the trail, head northwest toward the Philadelphia Museum of Art and Boathouse Row.

It’s all pretty straightforward until you get to Falls Bridge (Photo 1). There, you’ll have some choices. You’re likely to see other cyclists turning left to cross the river. You could do that too. Another left at the far end of the bridge and you’re biking along Martin Luther King Drive and on your way back to the Art Museum. 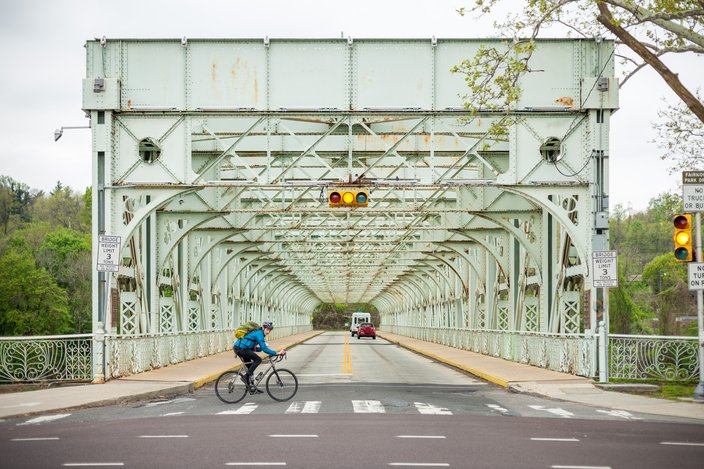 But we’re going further. Since we’re heading to Manayunk, you’ll want to cross at the signal and head in the same direction the rider in the picture is headed. The path curves to the right until you arrive at Ridge Avenue and what is possibly the most confusing spot of any urban trail network.

The trail turns to the left to cross Wissahickon Creek. (Photo 2) Then it disappears at the Wissahickon Transfer Station (a SEPTA bus depot). Don’t despair. Get off your bike and walk it past the crowds of transit riders waiting for the bus. Walk past Cadence Cycling & Multisport (or stop in to grab an energy gel). At the end of the block, there’s a crosswalk under the Welcome to Manayunk sign. 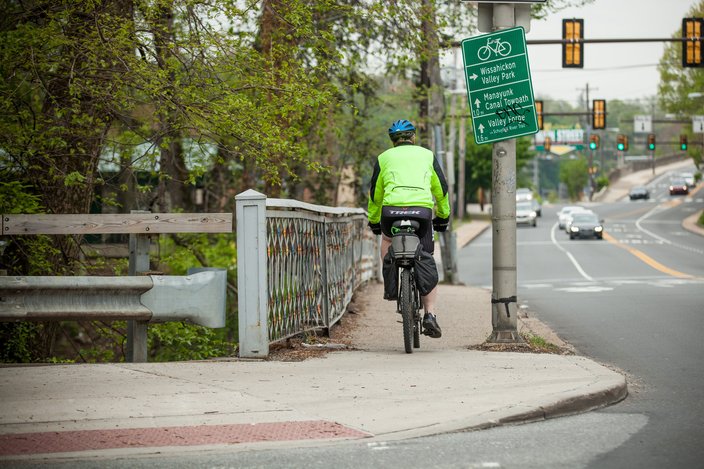 Once you’re safely across the street, you can get back on your bike and ride downhill on Main Street (not uphill on Ridge Avenue). This is the only part of the trip where you’ll be riding on the road, and it’s for less than a mile. You’ll notice the sharrows (shared arrow / bike arrows) on the street. They’re there to remind you — and drivers — that you have a legal right to be on the road. (Let them also be a reminder not to ride too close to parked cars whose doors may swing open without warning.)

Trust me: This section will get better in the coming years, and eventually it’ll be all trail. There are lots of plans. If you really want to know more, you can read this 37-page study done by the city of Philadelphia’s Department of Parks and Recreation.

For now, keep pedaling. When you see Human Zoom Bikes & Boards to your right and a water ice stand on your left, turn left onto Lock Street (Photo 3). 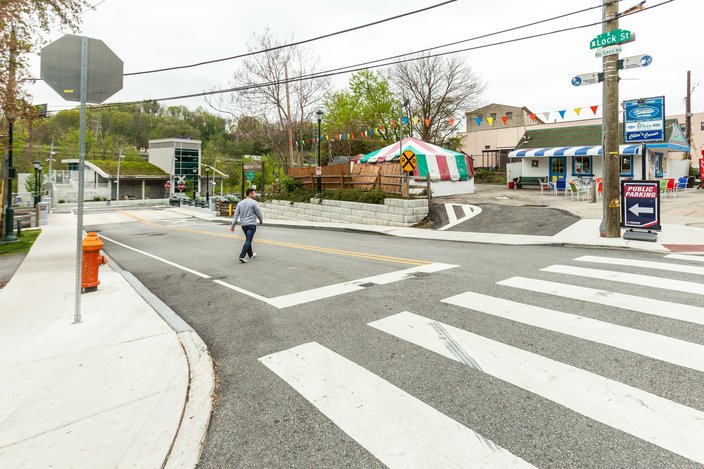 Lock and Main Streets in Manayunk.

Before you cross over the canal, you’ll find the Manayunk Canal Towpath to your right (Photo 4). The surface is crushed stone and wooden boardwalks. Stop and look both ways at all the road crossings in Manayunk, as cars may be driving through to get to the parking lots. 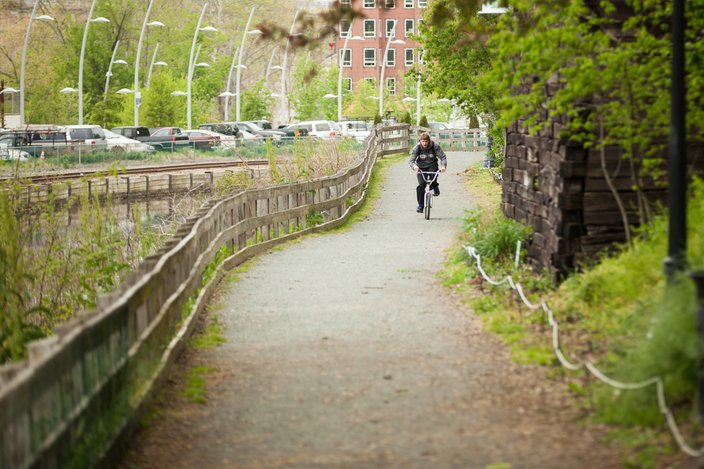 After you pass under the Manayunk Bridge, the ride gets much more bucolic. Take your time to stop and look around. I’ve often seen blue herons standing in the canal and turtles basking in the sun along this stretch.

The towpath ends near the old Shawmont Station, after which the path turns to asphalt (with a rough lip up from the gravel), then abruptly transitions to irregular cobblestones. (Photo 5) If you haven’t ridden this section before, I’d strongly suggest you get off your bike and walk it. It’s less than 50 yards until you’ll be back on a smooth surface for good. 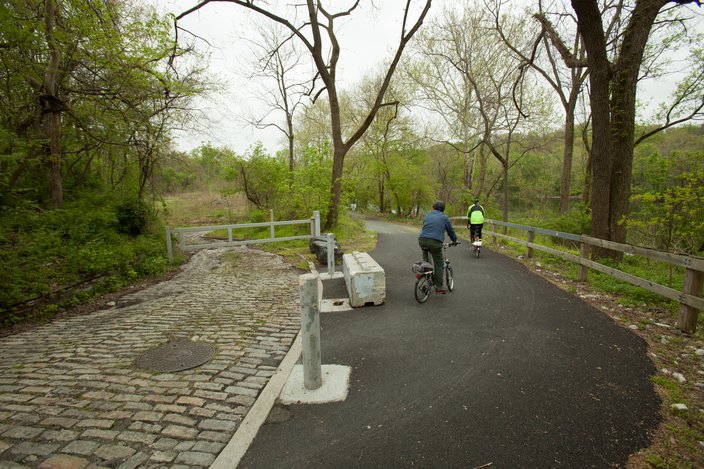 After the cobbles, you’ll cross railroad tracks (SEPTA Regional Rail) and come to the intersection of Shawmont Avenue and Nixon Street (Photo 6). Look across the intersection, and you’ll see a bright yellow bollard (Photo 7) and the paved Schuylkill River Trail sloping up and to the right. 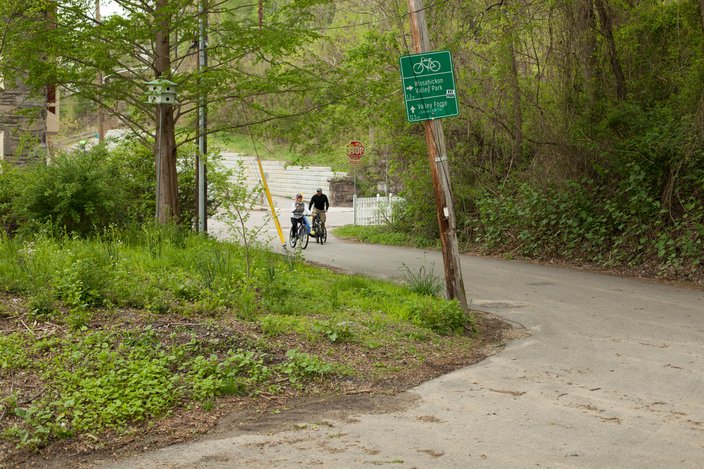 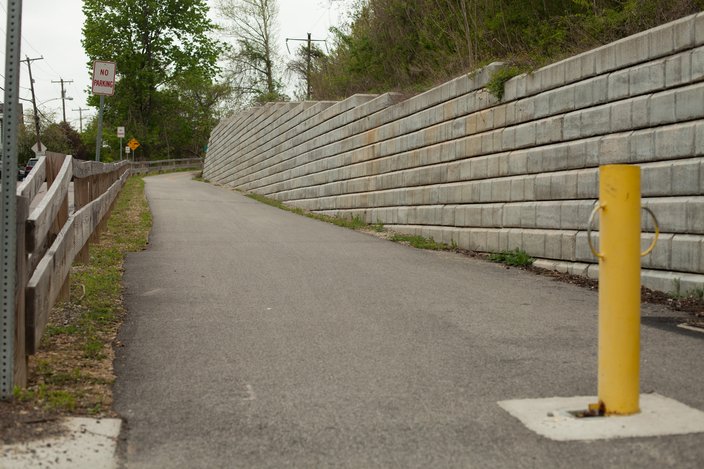 Get on this section of asphalt, and you’ll be able to ride straight to Valley Forge National Historical Park without ever having to get on a road. For now, let’s get you to the Conshohocken Regional Rail Station, just four miles up the trail. Along the tree-lined way, you’ll pass benches to rest on and signage that lets you know you’re on the right path — and how far you have to go to your destination. If you’re there at the right time of year and keep your eye out, you may spot some ripe raspberries beckoning from just a few feet from the trail.

A little less than three miles after you got back on the paved trail, you’ll see the Spring Mill Regional Rail station. If you’re feeling really tired — or spy a threatening thunderstorm on the horizon — pull out your SEPTA app, and see when the next train to Center City is coming. (And check out the Bicycle Coalition’s guide to taking a bike on transit.)

To the right of the station and a bit off the trail is Riverbend Cycles, a bike shop with a cafe. Grab a cappuccino to enjoy on their sunny deck, then check your tires. If they’re a little low on air, the shop will happily let you use their pump.

You’ll find more food and refreshment options a mile down the trail. At the intersection of the SRT and Harry Street, you’ll find the Conshohocken SEPTA station and — more importantly — Outbound Station (Photo 8). Pull your bike up to one of the bike racks and stop inside to say hello to owner Ken Fields and his staff. They have a full sandwich and salad menu as well as a large selection of cold and hot beverages. (They use La Colombe coffee.) I highly recommend the egg salad and chicken salad sandwiches. 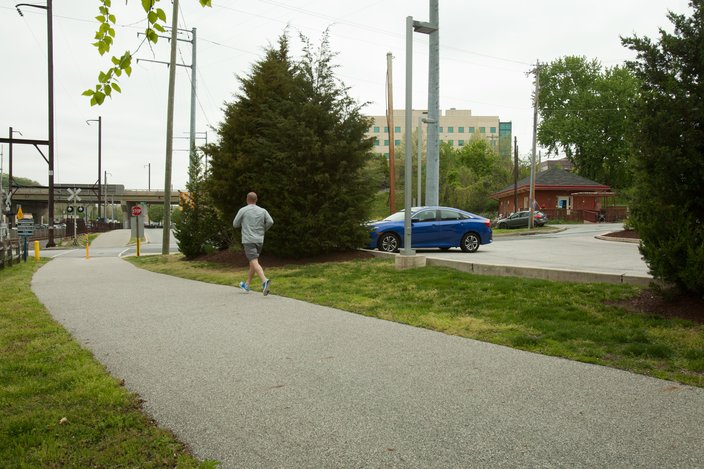 Kudos! You just rode 13 miles from Philadelphia to Conshy. Take a break and assess your options. You can ride back the way you came. You can hop on a train, get off at Market East — I mean Jefferson Station — and grab dinner in Chinatown.

Or you can keep going. It’s just a little over eight miles to Valley Forge’s Betzwood Trailhead which has water fountains, restrooms, and picnic tables.

One more tip, just for you brave souls who didn’t turn back: The Norristown Transportation Center is four miles from Conshy. Now I’m not telling you about this so you can grab the train home. You and I both know you’re gonna push forward to Valley Forge. I’m letting you know that the Norristown TC has the coldest water fountain — and the coldest air conditioning — on the Schuylkill River Trail. Bring your bike inside and take a break. You’ve earned it.