At the Penthouse Club, President Trump's current nemesis (almost) bared all for an appreciative crowd

“Batten down the hatches,” announced the eager DJ through a sound system inside a gentleman’s club just up the block from a vast marine terminal, as smoke billowed from the stage floor somewhat masking the red and green ceiling-level laser show. “It’s about to get stormy in here.”

Doing the job he was there to do, his crowd-hype tone amplified with each line of the featured performer’s curriculum vitae.

Her recent interview on 60 Minutes – the most-watched edition in the past decade.

Reaching the mountaintop of being named “Pet of the Century” by a pornographic magazine.

“Through lightning, thunder and so much more, are you guys ready for her?” he asked the guys and gals who'd flocked to The Penthouse Club on Castor Avenue near the Tioga Marine Terminal.

Neither they nor the non-featured performers exposed and exposing to a larger-than-average crowd on a Monday night seemed to mind that the show started nearly two hours later than scheduled.

They enthusiastically played their roles in a scene that bucked the trend of American discord, casting any semblance of political thought far aside to indulge in a carnal celebration of whimsical, promotional partial-nudity – if only for roughly 15 minutes of their lives.

This was the night – well, the first of two, she's back at the bar Tuesday night – that Stormy Daniels (aka Stephanie Clifford, aka thorn in the proverbial side of President Donald J. Trump) came to Philadelphia.

NO PHOTOS, NO POLITICS

Not even 48 hours had passed since Daniels taunted the president she’s suing for defamation during Saturday Night Live’s cold opening.

She was in town on what’s billed as a promotional tour for her appearance in the May/June issue of Penthouse magazine, free copies of which were available for the first 100 people paying the $20 cover.

When people are offering you cash to stomp on Cheetos for politically fueled giggles, you represent more than a magazine cover. You’ve been co-opted as a resistance-movement figurehead, whether you want to be or not (but likely don't mind, whatsoever.)

Daniels, 39, was supposed to take the stage at 9 p.m. and again, after a meet-and-greet with fans, two hours later. There were to be no media interviews. Taking photos or videos constituted grounds for immediate ejection, a warning shared numerous times.

That schedule would not hold, and if it had, Daniels would have performed for roughly 10 people who don’t get paychecks from the establishment.

At 8 p.m., just one thirtysomething man sat at the seats near the stage, accessible to performers by a grand staircase.

Despite the club's 11:30 a.m. opening, no dancers would take to that stage until 8:24 p.m., as the Sixers wrapped up a win over the Celtics on the big-screen TV on a wall with starry-sky lighting.

There were no vile words bandied at Stormy Daniels. Not a mention of the political world swirling around her could be heard, either.

There were several TV news trucks outside as the crowd grew, slowly but surely.

A couple took a table near the end of the stage. It wouldn’t take long for security to intervene when the woman – feeling rather good, apparently – got a bit too touchy-feeling and climbed on stage with a brunette performer wearing slivers of red.

They were followed by two balding men, one in his late 50s or early 60s and the other about two decades his junior, who sat on opposite sides of the stage. They were quiet, and they kept to their respective selves but for when performers engaged them with locked eyes and tattoo-adorned bodies.

At about 8:45 p.m., a sextet of men straight out of Lower Northeast central casting rolled in like the storm they came to see.

Three of them sported T-shirts with Daniels’ Penthouse cover silkscreened upon them. For the next two hours, they stood, hooted, hollered, gesticulated and offered their versions of sexy dances. They were rather entertaining ... from afar.

Their three friends mostly remained sitting at a silver stage-side couch. They kept the buckets of Yuengling and Coors Light coming and an eye on ensuring their buddies didn't become troublemakers. 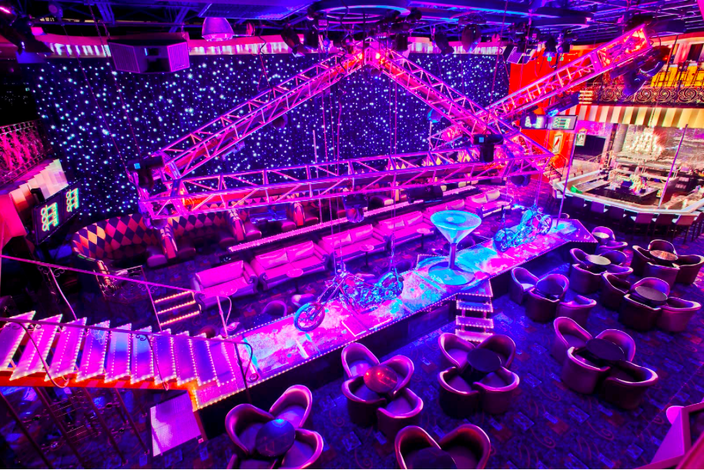 A look inside The Penthouse Club at a quieter time.

"Sweet Dreams" by the Eurythmics. "Semi-Charmed Live" by Third Eye Blind. "Suck My Kiss" by the Red Hot Chili Peppers. "24K Magic" by Bruno Mars. "Bulls on Parade" by Rage Against the Machine. "Jump Around" by House of Pain. "Dr. Feelgood" by Motley Crue.

These helped make up the soundtrack as the crowd awaited Daniels, and as a reporter (not me) cruised the room asking attendees if they were drawn out tonight solely because of the featured performer.

The crowd grew. A pair of cigar smokers from whose table a pair of performers would rarely leave. Three more couples, then a fourth and a fifth. A man in a “These Colors Don’t Run: Desert Storm” T-shirt. Another man with a gingham-patterned, short-sleeve button-up shirt tucked into his shorts.

One of the Stormy Daniels’ T-shirt brigade yelled across the stage and held his arms out as if he was on a crucifix as his friend made hula-hoop motions with his hips sans a hula hoop.

When Bon Jovi’s "Living on a Prayer" came on, the dynamic duo broke out their air guitars and fist pumps. The third? He put a dollar bill over his mouth and inhaled, waiting for the next dancer to approach.

By 10:30 p.m., the bar was essentially filled, as were the stage-side seats. Nobody took advantage of eight tables in the $400 bottle-service VIP area, though, at least for a 9 p.m. show that would finally start fashionably late, just five minutes before the 11 p.m. show was scheduled to begin.

Just before the DJ implored the apolitical crowd to batten down those hatches in the face of an approaching storm – are gentleman’s clubs really ever the place to talk about the politics of the day? – the bartender from a neighborhood not too far away broke down the scene.

It’s always difficult to discern what members of the crowd are here for a featured performer, but she only recognized two regulars on a Monday night that was substantially more crowded than normal.

She pointed out the extra security measures being taken to ensure that photos and videos weren’t.

She said the club located in the shadows of the Tioga Marine Terminal isn’t as desolate as one would think. Zoning regulations, and neighborhood aversions to such a spacious gentleman’s club, made Castor Avenue with limited access to nearby I-95 the ideal location. (“Who’s going to say no to putting it here, the scrap yard?” she rightfully observed.)

The place doesn’t generally get crowded until a given day is about to turn into tomorrow, she said. Theirs is a late-night clientele, and the employees here aren’t the sort that “beg for money.”

When she heard they’d announced the show would start at 9 p.m., she laughed. No way that’ll happen.

Three songs, she predicted, based on the normal routines. Either American-themed or '80s rock. Then, she pointed up to the second floor. Daniels was making a discrete approach to the stage-entrance staircase. She was in firefighter gear.

A short break was taken. The stage was cleaned off. The no-photos warning was re-issued. The curriculum vitae was shared. The crowd was implored to keep their receptive energy up during the show.

And then, to the opening strains of "Burning Down the House" by the Talking Heads, Daniels descended the staircase in a fire hat, jacket, skirt, garter belt and unconventional-for-stripper short heels. (“When’s the last time you saw shoes like that at a strip club? They're, like, jazz shoes,” asked one observer.)

Daniels sashayed to the bar-end of the stage, where attendees mustered. Some held bills in their hands waiting for that moment to personally share them with Daniels, while others made them proverbially rain onto the ground at her feet.

“Fire Station 69” read the back of a nice costume jacket that would soon find its way to the ground. An old-head pulled four singles out of his wallet, making sure to keep the $20 safely in pocket, as Daniels approached to take them away seductively. 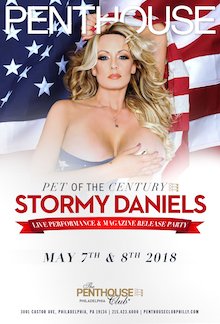 The hooting from the men in Stormy Daniels’ T-shirts intensified as the garments covering her body abated.

The woman who got in trouble for climbing on stage earlier removed the eyeglasses from her head, which Daniels buried in her cleavage. When she returned to earth, her jaw was nearly hitting the ground.

Song No. 2, "The Cult’s Fire Woman," stayed true to the performer’s theme. A bouncer gathered the growling piles of currency left at Daniels’ feet into a Moet & Chandon champagne bucket.

"She Rides" by Danzig – opening lyrics: "Yea, she'll take you down" –prompted Daniels to place a blue blanket upon the stage floor. Then, she writhed for an adoring crowd.

Daniels was far from expressionless, and even further from appearing to just be there for the payday. Sure, the routine had been seemingly performed time and again throughout her career. Yet, she engaged with audience members, being sure to thank them.

She had more than agency; she had control of the room without having to boast of it. Sure, she didn't dare climb the pole as the younger, more flexibly fearless dancers did, but she didn't need to.

People were there for her, not stagecraft.

Predictions of a three-song set proved wrong, even if the '80s theme held true.

Stormy Daniels stuck out her tongue and winked at nobody in particular and the world itself.

Stormy Daniels closed with "Heaven’s On Fire" by KISS.

There were no vile words bandied at her (at least not at the first performance, or the meet-and-greet in between). Not a mention of the political world swirling around her could be heard, either.

The only visible sign of the outside Trump world wasn’t even all that visible. He was a tall white male, probably pushing 50 years old, and he was smiling from ear to ear.

His long-sleeve dress shirt was tucked into his jeans. His right hand was filled with legal tender, at least until the moment he offered it up as tribute.

The performer couldn’t possibly have seen the two hats sticking out of his back pocket. One red and the other white, the Make America Great Again font was unmistakable. Maybe he brought them ironically, but he probably didn't.

She knelt down, put a hand behind his head and pulled it into her bosom. As she swayed right to left to right to left, she stuck out her tongue and winked at nobody in particular and the world in general.

The look was unmistakable. Despite all the chaos of her and others’ making, there’s no “again” about it in Stormy Daniels’ America.

On this night in Port Richmond, Stormy Daniels – the woman in a position to, at a minimum, continue playfully cashing in on embarrassing a sitting president – felt great.