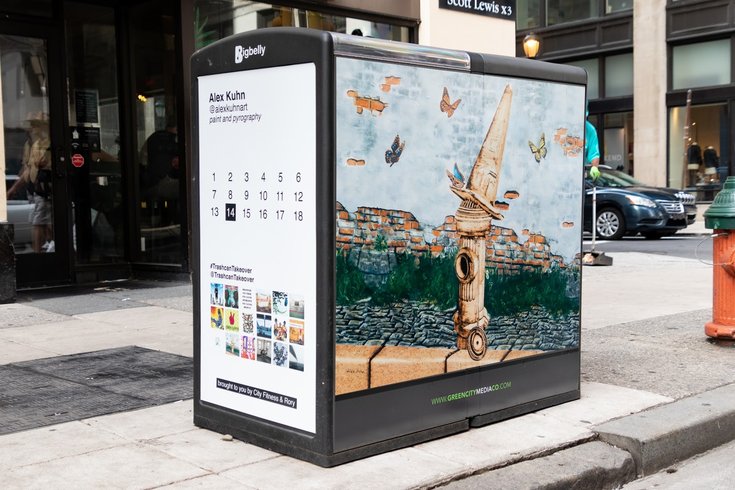 This trash can near 16th and Walnut streets is part of an 18-piece public-art project spurred on by the City of Philadelphia's recent push to sell those spaces as advertising.

Conrad Benner of Streets Dept, a Philly-based arts blog; Brendan Lowry of Rory Creative; and City Fitness have brought the initiative back for a second go-round.

Earlier this year, the three collaborators and 18 artists bought $10,000 worth of ad space around Rittenhouse Square for a month in response to those awful Barbera’s Autoland ads.

“The idea came from my personal frustration walking through the city and seeing these ads bombarding me and the rest of Philadelphia,” Lowry told PhillyVoice during the first takeover. “This space could be used in such a better way. It was frustrating people instead of inspiring them.”

According to the Streets Dept announcement over the weekend, the initiative is expanding a bit and looking for 30 artists this time around:

“Selected artists will be offered a stipend for your participation, and you can either use work you’ve already created or create something new. There will be a tight turnaround though just based on the really unique opportunity we’ve been offered, but the scale of this second round is much wider than our first, so if you were at all interested in what we did last time you’ll love where your art is seen this time.”

It sounds like Trashcan Takeover was a success, and is growing, which is good news for Philadelphia’s streets and for its citizens’ eyeballs.

Artists interested in applying for one of the 30 slots can fill out this form by the end of the day on Jan. 3.