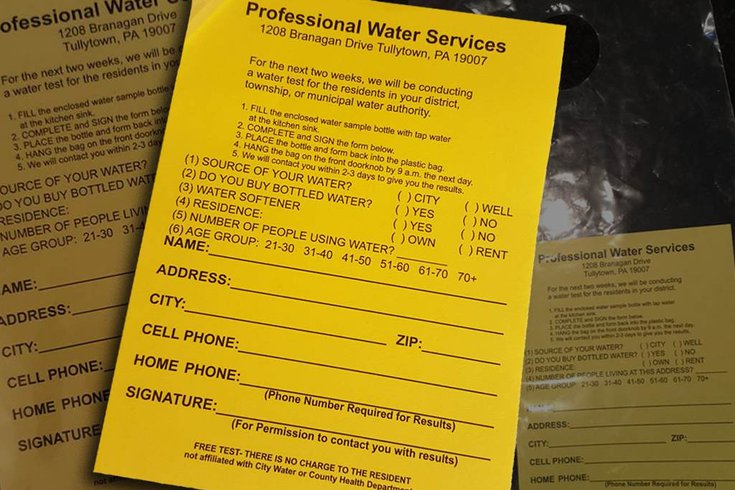 A number of local residents took photos of the solicitation materials they found on their front doors and posted them to Facebook, asking if they were legitimate.

A Bucks County company is using scare tactics in the wake of the Flint, Michigan water crisis to make sales, residents and municipal officials say.

The ongoing solicitation in some Philadelphia suburbs by Professional Water Services of Tullytown is leaving many residents worrying, in most cases needlessly, about their drinking water.

The timing of the marketing campaign – amid headlines of the crisis in Flint and well contamination in several Montgomery and Bucks County towns – combined with the firm’s alleged failure to tell residents that it sells water conditioning and filtration systems, has municipal officials labeling the effort a bit shady.

“They got a license (from the township) to do it but they’re scaring people. They’re not putting on there that they sell water equipment. When you find that on your door after reading about (Flint) Michigan, you get upset.” – Bensalem Mayor Joe Digirolamo

The company is leaving small plastic bags on the doorknobs of homes in Bucks and Montgomery counties. Inside is an empty vial and a card telling residents they can get their water tested for free. The card also includes survey questions. In tiny print, at the bottom, PWS states it is “not affiliated with City Water or County Health Departments.”

Several towns have been fielding calls since the fall from worried residents, and some municipal officials have shared concerns with PWS. Nonetheless, the sales effort apparently continues to expand, with the Bucks County Office of Consumer Protection fielding dozens of calls in just two days last week and Warrington Township officials receiving on Wednesday an application from the company for a solicitation license.

“My personal opinion, for whatever it’s worth, is this company thinks they see an opportunity with the situation in Flint, Michigan,” she said.

In light of national concerns about Flint, a city rocked by a public health crisis after drinking water was contaminated with lead, and local worries about contaminated drinking wells in the area of two long-closed U.S. Navy bases, the Naval Air Warfare Center in Warminster and the Willow Grove Naval Air Station in Horsham, the campaign is preying on residents' fears, said officials in several municipalities.

“They got a license (from the township) to do it but they’re scaring people,” he said. “They’re not putting on there that they sell water equipment. When you find that on your door after reading about Michigan, you get upset.”

The mayor said he was particularly troubled by a survey question on the age of the homeowner.

“Seniors and people with babies are going to be the most susceptible,” he said.

Numerous calls to Professional Water Services for comment on this story went unreturned. 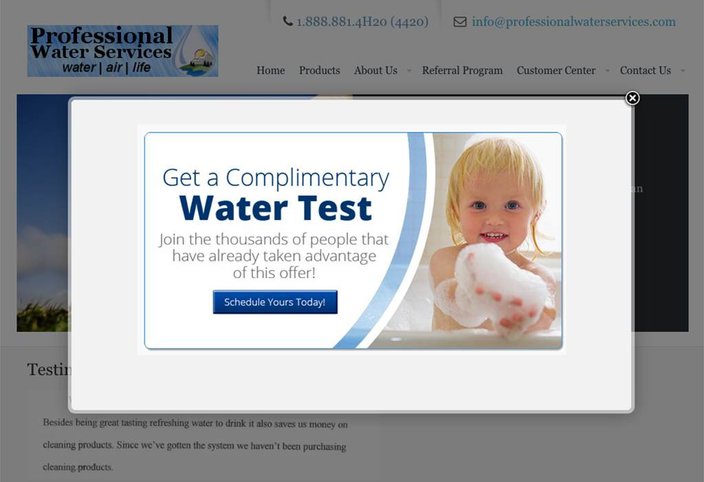 'IT CROSSED THE LINE'

Rob MacNamara, a manager with Aqua Pennsylvania, which serves Bensalem, expressed a similar sentiment in a Feb. 10 e-mail to Digirolamo’s office. “I worry about the elderly possibly being singled out,” he wrote.

MacNamara wrote that he looked into the situation as the result of PWS doing a similar distribution in Abington Township late last year.

Abington Township Manager Michael LeFevre said he reached out to Aqua because of his own concerns. Abington detectives then looked into the matter and determined PWS is a legitimate company, LeFevre said.

“I called (PWS) and they said they were selling water softeners and I said I had a problem because you’re not spelling that out. You’re implying there is something wrong with the water." – Herb Schoell, manager, Upper Southampton Municipal Authority

But the company’s tack still didn’t sit well with him.

Herb Schoell, manager of the Upper Southampton Municipal Authority, said his phone “began ringing off the hook for a week or two” in late October/early November with calls from residents, many of whom were seniors, worried about their drinking water.

“I called (PWS) and they said they were selling water softeners and I said I had a problem because you’re not spelling that out. You’re implying there is something wrong with the water,” he said.

Schoell said the timing was troubling, too.

“There’s an issue up here (in nearby towns) with Navy bases and nearby contaminated wells and we’re just down the street from Warminster,” he said. “I don’t want to say they’re preying on people but they need a better business approach.”

Christian Jones, director of water and sewer in Warrington, said early last week that he hadn’t heard of Professional Water Services or its campaign. Then he reported Thursday that the township, which is dealing with well contamination, got a solicitation license application from the firm Wednesday.

John McMenamin, township manager in Lower Southampton, said the fall distribution by PWS was apparently done in only a small section of town as it rendered just a few calls from concerned residents. Nonetheless, he said PWS failing to disclose what they sell was “kind of shady.”

PWS marketing director Jacob Borochaner wrote in an e-mail to a Bensalem official last month that he was unaware of any complaints made to the company.

PWS is in good standing with the Better Business Bureau, with no complaints filed with BBB in the last three years.

AQUA PENNSYLVANIA: THE WATER IS SAFE

Michael Bannon, director of the Bucks County Department of Consumer Protection, estimated his office had received 50 calls in two days last week related to the PWS campaign. But he doesn’t see anything that is illegal or would prompt him to contact the firm.

“It would be nice if they offered more of an explanation. … With the attention being given to Flint, this is an interesting way to market their product,” he said. “This is a long-established company. It’s just the tactic that’s getting attention.”

Despite the involvement of MacNamara on behalf of Abington, Aqua Pennsylvania spokeswoman Donna Alston said she was unaware of complaints in its service area, which includes Bensalem and parts of eight other Bucks towns along with Abington and 25 other Montgomery communities.

She stressed that the water in Bensalem and Abington meets all state and federal drinking water regulations and that Aqua is required to notify residents in its coverage area if that is not the case.

She said Aqua would not offer its opinion publicly of the PWS sales effort.

Alston did point out that Aqua also offers free water testing to its customers.

Bensalem resident Howard Dion said he believes PWS is preying on the fears of folks aware of the Flint situation. But the 72-year-old said it didn’t work with him.

“I figured they were trying to sell me something so I threw it away,” he said.

Cindy Cossabone Kamm, also of Bensalem, said her husband did the same.

“He thought it was a rip-off,” she said. “The fine print on it did not list our current water provider which was a major clue.”

The reaction to PWS' marketing tactics would seem to be at odds with the firm's mission statement. According to the company's web site, president and founder Stuart Borochaner, in 1961, stated its mission:

"To vigorously promote the benefits of Rainsoft quality water to homes with the highest regard for professional and ethical standards.

"To provide our clients with the best water treatment technology, equipment, and service possible.

"At Professional Water Services, we realize that our clients are an extension of the way we represent ourselves. Our conduct and attitude will be what carries us into the next generation, and beyond."