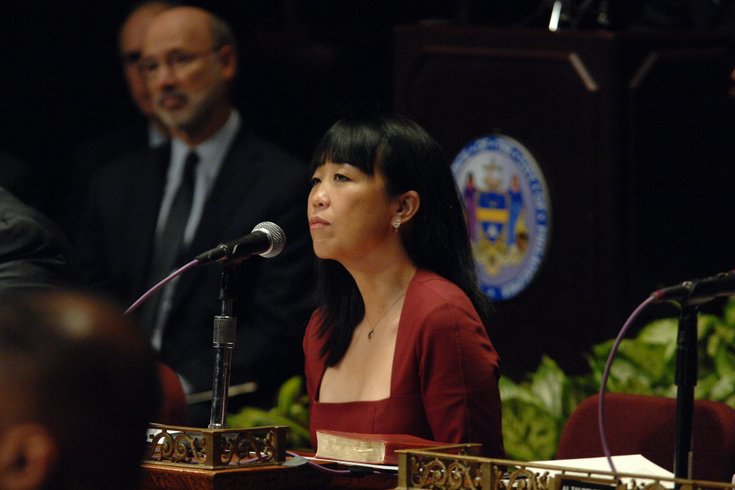 City Councilwoman Helen Gym speaks during Mayor Jim Kenney's inauguration. Councilwoman Gym presented a resolution on Thursday to hold hearings on the state of the city's drinking water following a crisis that occurred in Flint, Michigan.

Freshman Councilwoman Helen Gym will soon host a hearing – or, more likely, hearings – on the current state of Philadelphia's drinking water in response to the national interest in the crisis in Flint, Michigan.

There, in a cost-saving effort, officials switched the water source for that city from Lake Heron to the Flint River, causing lead to build up in drinking water as the more acidic river water wore down the aging pipe infrastructure.

In an effort to make sure nothing like that happens here, and to check on the state of Philadelphia's water, Gym offered a resolution - that was approved - at Thursday's City Council meeting to organize hearings on water quality.

"I don't think Philadelphia is Flint," she said, in an interview Thursday. "But, we need to be vigilant."

Gym noted that the crisis impacting the people of Flint is a "man-made crisis," and it's one that can be prevented by taking the correct precautions and by making sure local residents are aware of the dangers that lead in drinking water could pose to families.

"We want to make sure that these hearings will get out to as many people as possible," she said.

In the resolution, Gym noted that, unlike Flint, the Philadelphia Water Department "engages in regular lead testing and deploys anti-corrosion treatment to ensure water quality," but some homes in the city could still have aging pipes and homeowners or renters might not always be aware of the potential issues.

Gym said that by holding these hearings, the public can learn about potential issues and be able to be informed and prepared if water quality in their home proves to be an issue.

Specific information about the hearings – dates, times, locations and official attendees – are forthcoming, Gym said. Those details will come together at an upcoming meeting of City Council's Committee on Children and Youth and the Committee on Public Health and Human Services.