The local acts you need to see this season 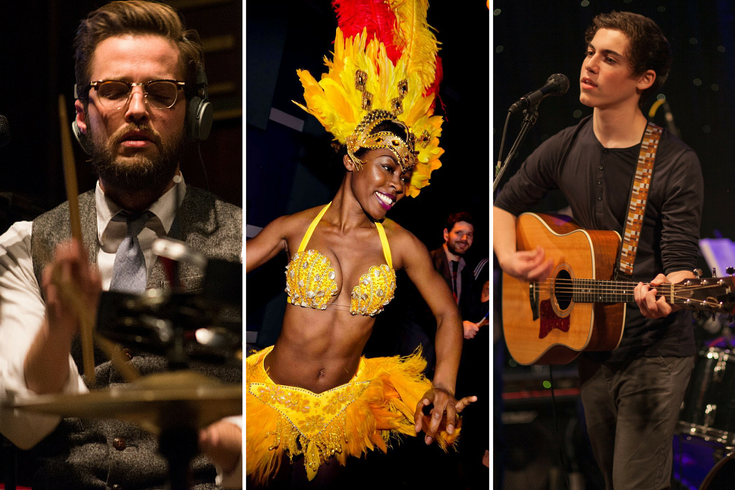 From left to right, Wild Orphan, PhillyBloco and Ben Kessler.

There are tons of great musical acts gracing Philly stages this summer. So many, in fact, that we need two summer music previews to fit them all in. From Underground Arts to World Cafe Live, the city's music venues will be pumping all season long with local talent. Don't miss your neighbors in action - and then keep an eye out for our top choices for national acts coming to town.

The Bailey Hounds and their melancholic, blues-influenced Americana sound will feel right at home in Laurel Hill Cemetery. Guests are encouraged to bring blankets, chairs, food and beverages.

High schooler by day and singer-songwriter by night Ben Kessler will play his signature acoustic jams and pop-rock trio Religion & Rocketry will open.

Bahamas with Hayden and Wild Orphan

Afie Jurvanen or Bahamas is a Finnish-Canadian and Hayden is from Toronto, but Wild Orphan is a soul band hailing from West Philly.

Since he released his self-titled debut in 2010, Bill Ricchini aka Summer Fiction moved from South Philly to Brooklyn. But he's home for a release show for his new album "Himalaya" with local opener Paul and Beril.

Bucks County indie emo band Eunoia is releasing their new album, "Traces of Blue," and they're celebrating with a show featuring Nathan Earl and Rachel Joy, Sonnder and Church Girls.

Philly-based musician Bill O'Meara will be releasing new music at this show featuring Caleb & Carolyn, an indie-folk duo from Buffalo.

The Swollen Fox Anniversary with the Lawsuits

Philly-based rock group Hivelords is releasing an album, "Anthropic," with the help of Primitive Man and Opium Lord at this release show.

This guitarist/singer-songwriter has been slowly putting out new singles since September. Check out Olmstead and Austin-based musician Elijah Ford for a relaxing evening.

With over 20 members and a whole lot of energy, PhillyBloco's infectious mix of samba, funk and reggae make for an instant party.

Experience the region's best up-and-comers with this week-long festival featuring over 25 performances.