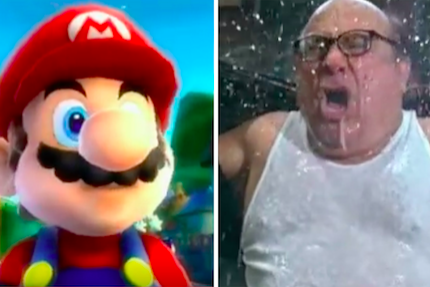 At the time of its release in 1993, 'Super Mario Bros.' was largely considered a flop, generating $20.9 million at the box office with a budget of $48 million. Years later, it became the epitome of the kind of movie that people would vegetatively watch while sick at home, if only to laugh at young John Leguizamo's Luigi and admire the reptilian wardrobe of the goombas.

But what if, instead of the late Bob Hoskins as Mario, it had been Danny DeVito playing the supercharged plumber?

In an interview published this week at SciFiNow, 'Super Mario Bros.' director Rocky Morton ('D.O.A.,' 'The M Word,') says he actually wanted to cast the lovable co-star on "It's Always Sunny in Philadelphia," but DeVito just wasn't interested in the project.

"How did Bob Hoskins and John Leguizamo end up being cast as Mario and Luigi?" SciFiNow asked Morton.

Well, Danny DeVito turned us down. Mario was the main character in the cast, and Bob was available. It was basically about availability. There are all these stories about the way people are cast but it’s normally about availability … Then we saw lots of different Luigis and John stood out because of his comic timing, his ability to be real but also be funny at the same time. Bob had that ability too. We wanted it to have a reality to it, especially the relationship, and we wanted it to be funny but not just a series of gags.

Things might have gone differently had Morton — a director whose music video credits include Led Zeppelin, Talking Heads and Miles Davis — been given more creative control over the final script. As he explains in the interview, 'Super Mario Bros.' was meant to have a dark sci-fi streak to it, but Hollywood Pictures saw it more as an opportunity to capitalize on the popularity and theatrics of the video game.

The original script, a family friendly concept written by Dick Clement and Ian La Frenais, had been transformed by Morton and co-director Annabel Jankel into a darker, more serious exploration of the brothers' relationship. It might have appealed more to adults whose kids had become glued to a Gameboy and Super NES. Instead, it was wrung into the predictable, though still absorbing, action-comedy we remember today.

Can you imagine DeVito as Mario, fresh off his sinister Penguin performance in 'Batman Returns?' Maybe he wanted to move away from that sort of role. His next film appearances were in the Razzie-winning 'Hoffa' (released the same year) and in 'Get Shorty,' where his performance as Martin Weir remains a career highlight.

Anyway, here's a clip from 'Super Mario Bros.' for memory's sake. The entire interview, including ornery Dennis Hopper anecdotes, is definitely worth a read.