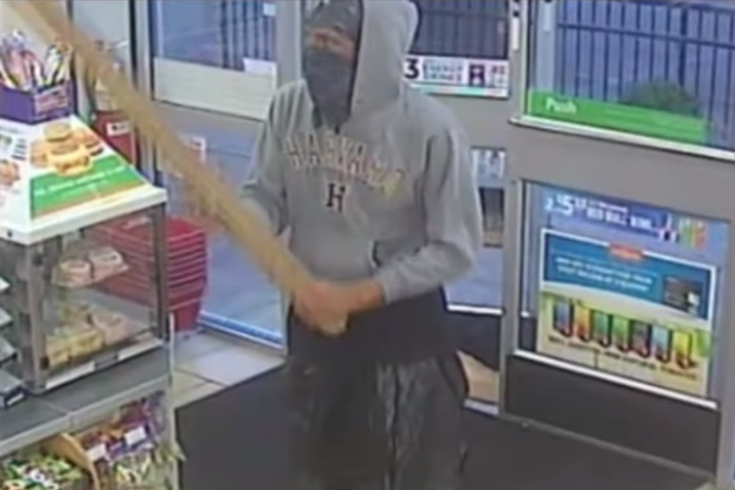 Police are asking the public for help Tuesday identifying a man who they say robbed four convenience stores armed with a 2-by-4 piece of lumber in Northeast Philadelphia.

The suspect is described as white or Hispanic man between 6-foot and 6-foot-2 in his 30's with brown hair.

Authorities said the four robberies occurred in the last month.

The first incident happened Sept. 21 around 4:30 a.m. at the 7-Eleven located at 1190 East Luzerne Street in Juniata Park. The suspect entered the store with the piece of wood and threatened the clerk, who fled to the stock room. The suspect gained access to the cash register by breaking it open with the 2-by-4. He fled the store after stealing an unknown amount of money.

On Sept. 24, the suspect struck the 7-Eleven located at 3300 Aramingo Avenue in Port Richmond. He entered the store with the 2-by-4 and threatened the employee, who complied and gave the suspect an undisclosed amount of cash.

The next incident occurred on Sept. 29 around 2:10 a.m. on the 3200 block of Richmond Street in Port Richmond. Authorities have not released surveillance video of this robbery.

The latest robbery happened on Oct. 15 around 11:25 p.m. at the 7-Eleven located at 3967 Kensington Ave. in Frankford. During this incident, the suspect was armed with a 2-by-4 and demanded money. After a clerk was unable to open one of the cash registers, the suspect went behind the counter and took the drawer before fleeing the area. The drawer was later recovered on the 3900 block of Frankford Avenue.