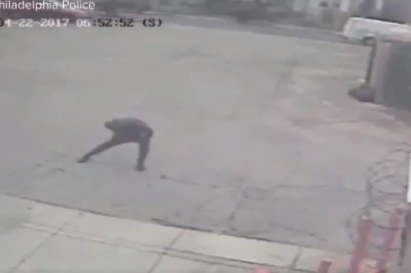 A suspect is seen stretching in the parking lot of a North Philadelphia Dunkin' Donuts before allegedly robbing the store of more than $300.

A suspect wanted for allegedly robbing a Dunkin' Donuts in North Philadelphia was seen getting in a workout before making out with a few hundred dollars.

Video footage shows the armed robber stretching in the store's parking lot in Logan around 7 a.m. last Saturday, according to CBS3. The suspect pointed a gun and told the cashier, "You have 20 seconds to give me the money from the registers," according to the news site.

The suspect took more than $330 from the store before heading north.

While no injuries were reported during the robbery, the suspect is getting quite a bit of attention for the incident on social media.

Philadelphia police have seemed to remove the original video of the suspect stretching from its YouTube page, but footage of the robbery has still been widely shared on Twitter.

The story also made its way around national news sites, including Fox News and Huffington Post, in recent days.

Philly robber seen stretching in Dunkin' Donuts parking lot before holding up the store & robbing them of cashpic.twitter.com/PeBeFZdRqO

@Breaking911 I guess America really does run on @DunkinDonuts

Anyone with information is asked to call Northwest Detectives at 215-686-3353.