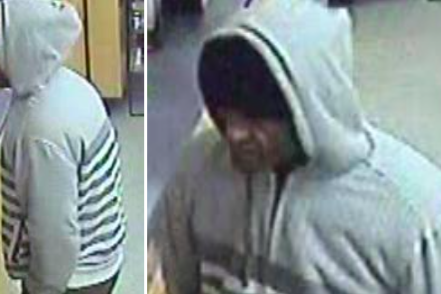 This suspect is wanted for multiple armed robberies in the 26th District.

A man is wanted by detectives for a string of armed robberies in which he used a handgun to steal cigarettes and cash at convenience stores in the 26th District.

According to police, the suspect first struck at the 7-Eleven on the 1000 block of N. Delaware Avenue on Dec. 5.

An employee at the store told officers the man entered wielding a silver handgun, pointing it at him and demanding money from the register. The suspect took the money, ordering the employee not to shut the drawer before fleeing in an unkown direction.

The second incident occurred on Dec. 8 when the suspect went into the 7-Eleven on the 3900 block of Kensington Avenue.

Police say the same man asked a store clerk for a carton of Newport cigarettes and the employee informed him they only had single packs.

The suspect then revealed a silver handgun, prompting the employee to show the man a carton of a different brand of cigarettes.

When the suspect looked down at the cigarettes, the employee hit him in the head with the cash register drawer and he left going westbound down Kensington Avenue with the carton. 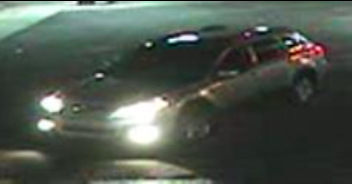 Police say a vehicle, pictured right, was seen in front of the store at the time of the robbery and left immediately following the crime.

The next day, Dec. 9, the suspect entered the Wawa on the 1300 block of Erie Avenue and asked for a carton of Newport cigarettes.

When the employee got the cigarettes, the suspect pulled out a silver handgun and said, “Don’t say anything, or I’ll shoot," according to authorities.

The employee gave the man money and the cigarettes at his request and he fled in an unknown direction.

The suspect in these robberies is described as a Hispanic male in his early forties with a medium build and a tattoo on his face.

According to police reports from each incident, he stands somewhere between 5'6" and 5'10" tall and used a silver handgun in each crime. In two of the robberies, he was wearing the same gray hoodie with white stripes seen in the above picture.

Authorities say the man committed a similar robbery at a 7-Eleven in Bensalem on Dec. 4.