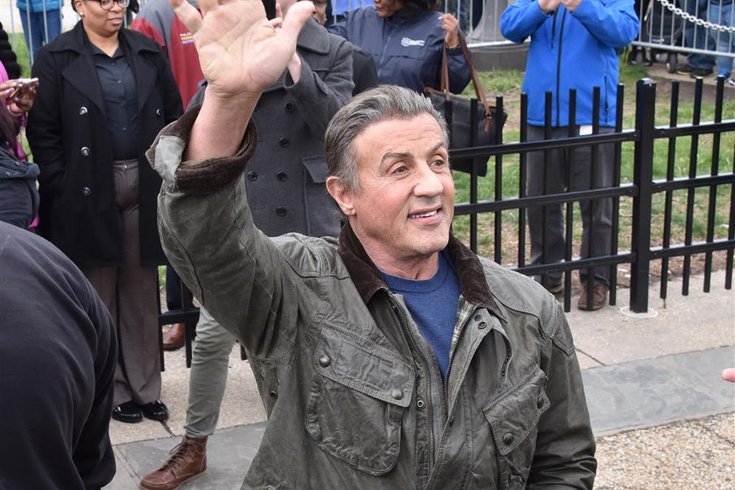 Sylvester Stallone discusses a "Rocky" movie he has no intention to make at the Cannes Film Festival. The actor also showed footage from his newest film, "Rambo V: Last Blood." Seen here is Stallone, who waves to the crowd near the Rocky Statue outside the Philadelphia Museum of Art on April 6, 2018.

Sylvester Stallone may have retired the Rocky character this past November, but it looks like the actor is still thinking about ways to explore Balboa's story.

In a masterclass at the Cannes Film Festival, the Philadelphian revealed teaser footage for "Rambo V: Last Blood" and discussed the "Rocky" and "Rambo" franchises.

Stallone mentioned that he has no current plans for the "Creed" franchise and does not plan to be in any future "Creed" films. However, he does have a new story idea for Rocky Balboa. The actor says to the crowd, "He finds this fella in the country illegally, and it becomes a whole thing."

"It’s like a magician. Once you’ve seen how he does the tricks you’re not impressed any more. It’s the same thing with Rocky," he said. "You’ve seen everything, so you’re like, ‘How can it be different?’ That would be different. When you take him and throw him out of the country and he’s in another world."

But don't get too excited about this idea. While he thinks this story could really work, he adds, "But I ain't gonna do it."

As many may remember, Stallone retired the Rocky character last November. He posted a video to Instagram to discuss the end of Philly's favorite fighter.

He stated, “I just want to thank everyone around the whole wide world for taking the Rocky family into their hearts for over 40 years. It’s been my ultimate privilege to have been able to create and play this meaningful character. Though it breaks my heart, sadly all things must pass... and end. I love you kind and generous people, and the most wonderful thing of all is that ROCKY will never die because he lives on in you….”

He then toasted to Michael B. Jordan, who plays Adonis Creed in the "Creed" franchise. Looking to him, he notes, "Now you have to carry the mantle."

During the masterclass, Stallone revealed teaser footage for the newest installation in the "Rambo" franchise. The film finds Rambo attempting to rescue people from a "horrible storm." However, the action-hero couldn't save everyone, and he finds himself dealing with PTSD and survivor's guilt throughout the course of the movie.

Rambo is also the surrogate father to his housekeeper's granddaughter. She goes to Mexico to find her real father, but, naturally, things don't go as planned. Stallone notes, "There's going to be some serious vengeance in this movie."

"Rambo V: Last Blood" will be released in theaters Sept. 20.