The space rock, known as 1999 KW4, has its own tiny orbiting moon 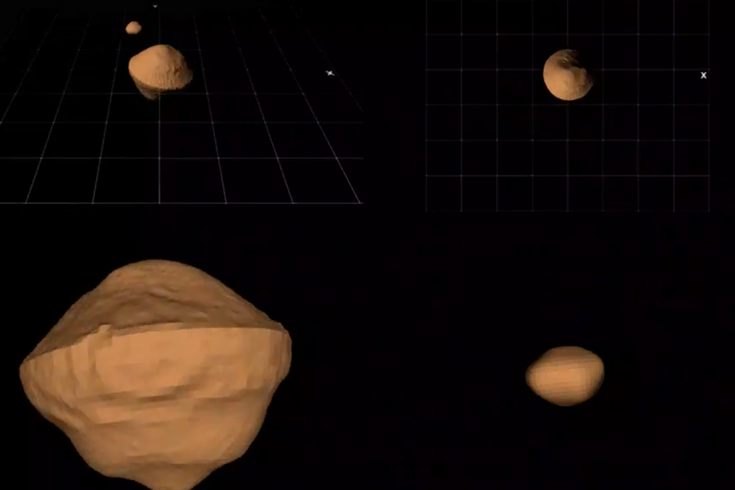 The 1999 KW4 asteroid will pass within 3.2 million miles of Earth over Memorial Day Weekend.

This is exactly how you want to start your Memorial Day Weekend: with a "potentially hazardous" asteroid flying by Earth on Saturday night.

Couldn't it at least wait until Monday night?

The asteroid, known as 1999 KW4, will come closest to Earth just after 7 p.m. on Saturday night, according to Newsweek, when it will come within about 3.2 million miles of the planet. That's not exactly "Armageddon"-level danger, but it's still classified as a Near Earth Object, and a striking one at that.

"It's one of the closest binary flybys probably in recent history," Vishnu Reddy, a planetary scientist at the University of Arizona in Tucson, told NBC News.

The asteroid itself measures nearly a mile in diameter, and its diminutive moon is roughly a third of its size. The asteroid and its moon will be soaring through space at close to 48,000 miles per hour when they (distantly) say hello to Earth.

Researchers are currently keeping tabs on more than 18,000 Near Earth Objects, according to Newsweek, roughly 10 percent of which are considered "potentially hazardous", which means while 1999 KW4 isn't an imminent threat, it's still technically exceptional.

And an even more interesting asteroid is yet to come.

The asteroid 99942 Apophis will fly past Earth on April 13, 2029, for the first time since 2004, when researchers calculated the asteroid had a 2.7% chance of hitting Earth and assigned it the most dangerous Near Earth Object classification of all-time, before eventually downgrading it, per Gizmodo.