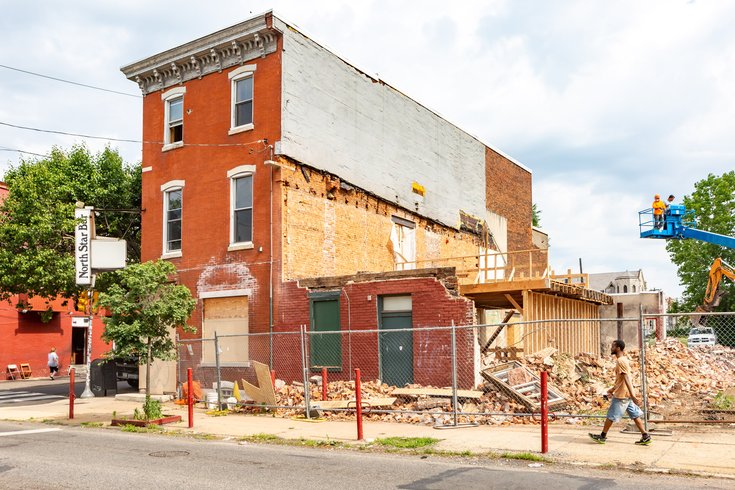 North Star Bar, a longtime music venue in Philadelphia's Fairmount neighborhood that closed in 2015, is being partially demolished and redeveloped into a restaurant and bar.

The building that once housed the North Star Bar in Fairmount is officially undergoing renovations to become a new restaurant and bar.

What was a popular venue to see local music and up-and-coming artists in Philadelphia for 35 years has stood vacant since 2015, surrounded by questions regarding the building's future. On Thursday, Josh Harris of Design Art Build Co. confirmed a restaurant and bar are coming to the property.

Until recently, the renovations at 27th and Poplar streets seemed to be progressing slowly, but crews have now demolished a portion of the former North Star Bar building. A Fairmount resident posted to the app Nextdoor on Thursday morning observing that, "The stage and balcony part of the building is half torn down to brick rubble."

"We made extensive repairs, because it was neglected for years," Harris told PhillyVoice on Thursday. Design Art Build Co. most recent work includes Cheu Noodle Bar in Fishtown and Love and Honey Fried Chicken in Northern Liberties.

Harris's plan for the North Star property includes honoring the historical design of the building. "We're adding more windows to the exterior," he said. "It's a lot more efficient to tear it down and open it up this way than it is to cut into old brick."

It has almost been four years since North Star Bar closed its doors. Construction began on the property, but the plans were redrawn after Harris' company was hired. This meant the project had to start from scratch with a newly revised building plan, he said.

Harris, who lives in Fairmount, and the owners are keeping the neighborhood in mind with this project. The restaurant plans to be a family-oriented space for locals.

Though, there is one thing that's probably on everyone's mind: Will this spot also be a music venue? While Harris couldn't discuss the future plans the owners may have for the restaurant and bar, he did confirm that there will not be a stage built in the new space.

But Harris declined to discuss most of the specific details about the old North Stars, except to say "It's going to be really beautiful, I can tell you that."