Come Sunday, what was once the world's longest streetcar route will become two bus lines 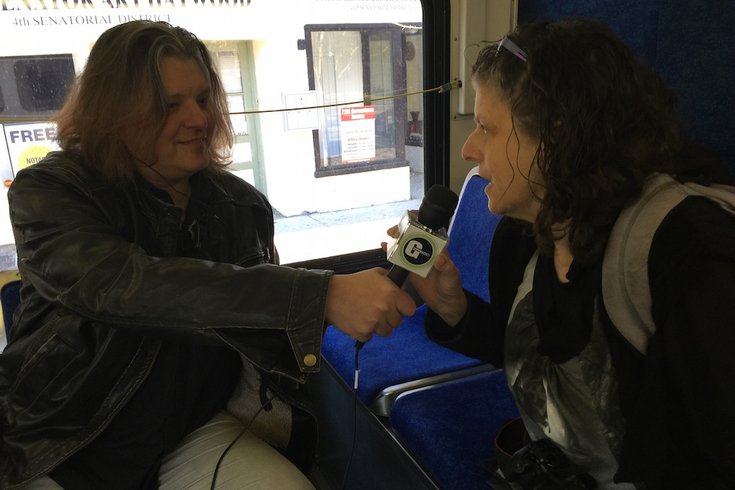 Gtown Radio's Tom Casetta asks Jill Saull about what she expects to see during their three-hour-plus ride on SEPTA's Route 23 bus from Chestnut Hill to South Philadelphia and back again.

It’s 9 a.m. on the last business-as-usual weekday before the extended Thanksgiving weekend, and a duo from Gtown Radio boards Route 23 bus No. 5696 in Chestnut Hill with audio equipment and a camera in tow.

Their mission: Spend the next several hours riding what was once the world’s longest streetcar line – south to Broad Street and Oregon Avenue, and back again – talking to riders on a route that, as of Sunday, will be split in half.

It doesn’t take long for Tom Casetta, program director on the Internet radio station that will soon shift to an FM frequency, to start hearing tales while producer Jill Saull captures images of passengers and the bus passing by.

“It’s terrible,” notes a passenger in a Chicago Bulls winter hat who doesn’t want to share his name. “Anything that can happen, I’ve seen happen on the Route 23.”

(Full disclosure: When I decided to observe their trip during my regular Gtown Radio appearance last week, I’d expected the worst, as the Route 23 is where a freelance photographer I know got assaulted a couple years back.)

That quote was not emblematic of all that will appear when Casetta puts together a podcast segment about the trip that will air on Gtown Radio sometime next week. However, it mirrored what a couple of other passengers said, not to mention SEPTA’s rationale for altering the route starting Sunday.

“I expected to hear a lot of complaints but we heard some really great stories. It was a great way to see the city in a different way.” – Tom Casetta, program director, Gtown Radio

SEPTA set out to address a dismal on-time rate of 64 percent by having the Route 23 end near 11th and Market streets while bringing a new bus – the Route 45 – into the fold. That new route will run from that area all the way down to Broad and Oregon.

With an average weekday ridership of 21,671 passengers, it’s SEPTA’s busiest bus route. (At 13.8 miles, though, it’s not SEPTA’s longest in terms of distance.)

On this day, passengers gradually filled the bus when it traveled through Chestnut Hill, Mt. Airy, Germantown and Nicetown.

Among them was Tiffanie Gadson, whose two children were bundled up in a dual stroller covered with a Teenage Mutant Ninja Turtles blanket for extra warmth this chilly Tuesday morning.

She spoke about a perceived grudge against single mothers on this – and other – lines.

“They’ll see me standing there with the stroller and speed by so they don't have to wait for me to get on,” said Gadson, sporting her security company uniform. “They’re extremely biased against single mothers.” 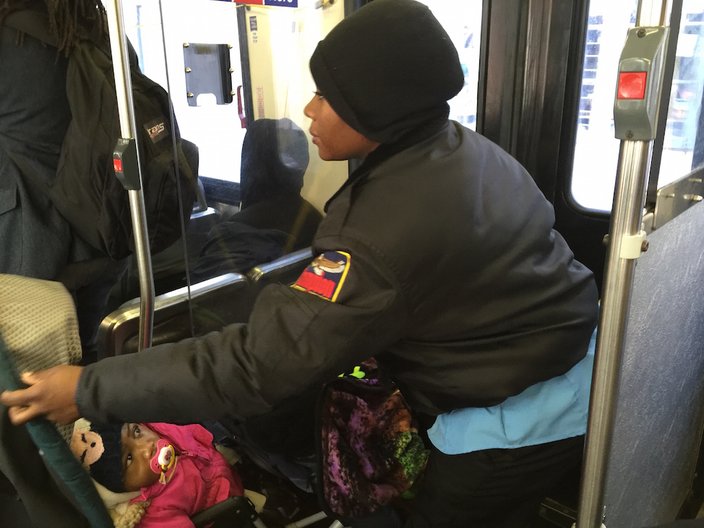 Tiffanie Gadson spoke about the difficulties of being a working single mother when the bus she depends on for transportation is unreliable when it comes to timeliness. (Brian Hickey/PhillyVoice)

Fellow passenger Aisha – whose last name is not offered – couldn’t wait to chime in.

“My experience on the Route 23 bus? It’s horrible s---. It never shows up or if it does, it’ll speed by when it sees a big crowd. The drivers are ignorant. They’re only being nice today because they know you’re here,” said Aisha, who shrugged when it was pointed out that the current driver was overly nice. “It’s the wrong bus to take. I’m surprised it stopped today.”

Not all riders on the route – it transitioned from trolley cars to buses in 1992, a move that slashed travel time in half – were as negative.

Cheryl boarded the standing-room-only bus at Venango Street. She said she’s been riding the route off and on for 20 years, but regularly since 2014.

“I enjoy the ride, just listening to my music and sitting back,” she said. “I don’t like that it’s being split, though.”

Despite a delay on Germantown Avenue – a Tastykake truck blocked a northbound 23 from turning properly at Huntington – the bus arrived at its soon-to-be terminus after 68 minutes. One of five passengers remaining on board at that point called the split an inconvenience before disembarking less than three blocks away.

From there, the bus remained relatively empty as it cruised down South Philadelphia streets – 12th Street past Christian, Washington and Shunk; a left on Snyder; 10th to Packer near the stadia and a loop around to Broad and Oregon – before it completed its full voyage in 93 minutes.

Nobody but Casetta and Saull rode the entire route, and everybody they spoke to told them they never had. 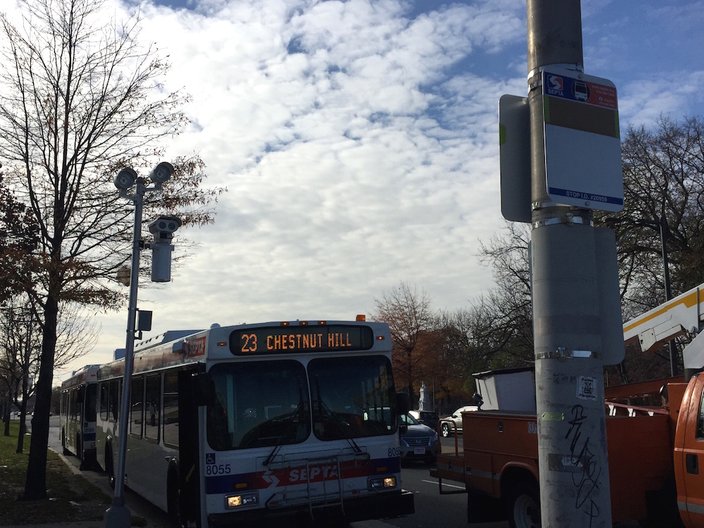 Signs for the Route 23 bus at Broad Street and Oregon Avenue will soon be changed as the route is being split in half. (Brian Hickey/PhillyVoice)


On the return trip, the bus filled to capacity much more quickly. Many passengers told the pair that they actually enjoyed the ride to Center City, where those on board got off and passengers heading to Nicetown and Germantown took their places.

A retired couple identifying themselves as Tom and Joan noted that they’ll actually climb aboard and pick a corner to get off and walk around in order to see new parts of the city.

Point worth noting: The 23 completed what will be the 45 route in 32 minutes. And that, said SEPTA spokesman Manny Smith, was the point in the first place.

With a public-information campaign up and running to ensure that people know about the looming change, Smith said the transit agency mulled several different end points for the dual routes. In the one it selected, SEPTA believes only “four people will need to get a transfer.”

“We haven’t heard from any of them,” Smith said of the affected quartet. “Some people in South Philly didn’t like the number 45, though. They wanted 23N and 23S or 23A and 23B, but we don’t do letters in that sense. The 45 number was randomly picked.”

As for the upcoming Gtown Radio segment, Casetta shared what he learned as the bus pulled back into Chestnut Hill three hours and 25 minutes after the voyage started.

“I expected to hear a lot of complaints, but we heard some really great stories,” he said. “It was a great way to see the city in a different way.”