Talking Tactics: The Philadelphia Union and a tale of two corner kicks 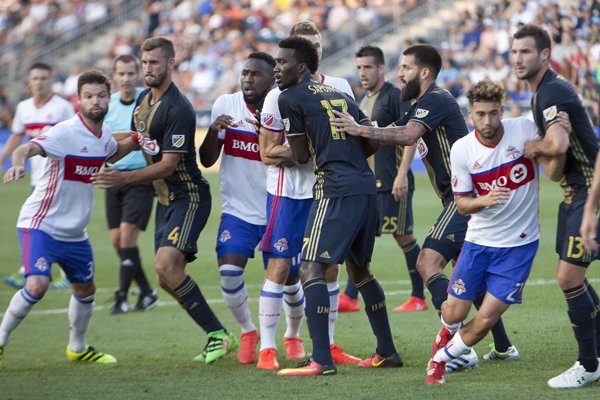 The Philadelphia Union set up their corner kick defense in a 2016 matchup with Toronto FC.

Every once in a while, Philadelphia Union head coach Jim Curtin will share explicit details about his team's tactical achievements or shortcomings.

Thursday was one of those days, with Curtin offering a thorough breakdown of what went wrong in the concession of two set-piece goals from last weekend's loss in New York City.

Here's the first goal, scored by center back Maxime Chanot, who used a stunt move to beat Richie Marquez and head home the equalizer at the near post.

Curtin's breakdown started with a simple question about takeaways from the Union's post-game film study:

PhillyVoice: Let me ask it this way; normally when you defend corners, Ray or the near side fullback will take the front post. Did he just come off the post, in the first sequence, to play the short corner?

Curtin: "We're always a team – and the data supports it – that (puts) two men on the posts. But in late game situations now, where two guys are on the ball, our near post guy – because Andre prefers to have the back post covered – is instructed to come off and deal with the short corner."

This is what Curtin is describing: 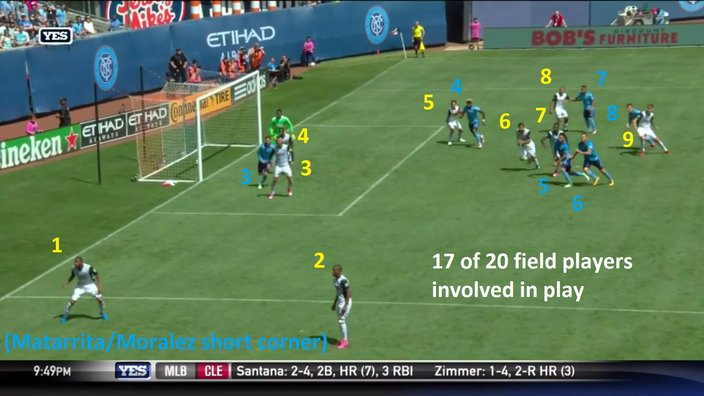 You see Ray Gaddis and Fafa Picault playing the required 10 yards off of Ronald Matarrita and Maxi Moralez, who are off-screen in a short corner setup. Haris Medunjanin is free to float and there are six 1v1 battles inside the box.

The only player not involved is Roland Alberg, who is standing outside of the 18 with Alex Ring and Jack Harrison.

Curtin: "So, if you see that one, it's Matarrita and Moralez. The last thing you want is them going two against one with no one out there. And then we're going, 'well, we had someone on the post, but they scored a different way.' It's a little bit of percentages. But the data does support, in all of the studies they've done, two men on the posts. It's amazing that that many teams in the world now, and even in our league, put no one on the posts. In that situation, though – and they're in a 3-5-2 at this stage – and they throw everybody forward, Fabinho comes off and deals with someone to mark. Ray goes to the short corner. If you rewind it further, Josh could have done better not to concede the corner."

This is the play Curtin is talking about:

Curtin: "I talked with (Josh). He doesn't see Sean Okoli. He just sees Matarrita out of the corner of his eye and he thinks the ball is going out. He doesn't take a glance at Okoli, who makes a great play to kick it off of him. But it's one of those (plays) as a center back, where if you just stop at that point, they have to run through you or it impedes them enough to where they slow down and the ball goes out of bounds. It's one of those bang-bang plays, now it leads to a corner, and there goes the momentum, boom. Off of that, Richie loses his guy and lets him get in front of him. We could have done a million things better in that regard. But, yeah, overall we're a team that wants guys on the front and back posts, but in late game situations where field players are thrown forward and it becomes a scramble, Ray is instructed to come off for (a short corner)."

There's your explanation for the first goal.

Here's a replay of the second:

Curtin: "The second is the one that bothers me most. The first one you go, 'OK, Chanot heads it well.' He gets a good header and Richie shouldn't let him get that free, certainly, and it goes in that near post area. But the second one, when you look at it, Fafa is not where he's supposed to be. He's a guy who, again, when you watch the tape, he just ran and was the one who worked his tail off to block the cross, so he's a little fatigued. Maybe the brain 'goes' a little bit. Fabi shouldn't come off the post at that stage. Ray comes off in the right moment but isn't close enough to the initial guy that it goes to. There's kind of a clump that leads to the back and Ray isn't close enough."

I'll go back to the screengrab that I used from Monday's analysis to illustrate what Curtin is talking about: 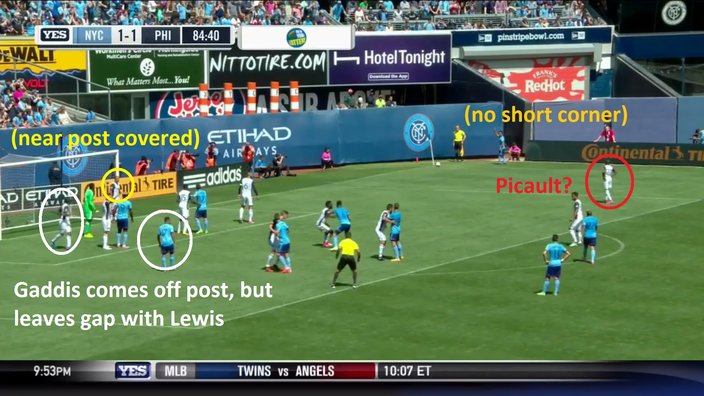 Picault is on the edge of the box and not really involved in the play.

You also see the gap between Gaddis and Jonathan Lewis that Curtin is talking about.

Curtin: "I think, if (Ray) challenges him there, then that play is probably over. In the mess, C.J. slips and loses Callens and the ball bounces a little lucky for them. We have an instance now of where, had Fabi stayed on the post – and when it goes back for that second ball, because that's how New York scores most of their corners, on secondary kind of chances – he's in a good spot to clear. Haris doesn't do great on either goal. He could jump on the first one and maybe disrupt Chanot. On the second one, after it goes over him, he kind of breaks out to maybe start a counter before the job is done of clearing the ball. So, again, I probably just named seven things, and it's a team effort in that regard, but the second one is what I have the bigger problem with, because it was a bit of a scramble..."

PhillyVoice: There were opportunities to clear.

Curtin: "Yeah, and we didn't. Our dealing with the first one is right, in that Ray should go (to the short corner). But the second one we're not decisive in our plan of how we defend corner kicks, so that one was harder."