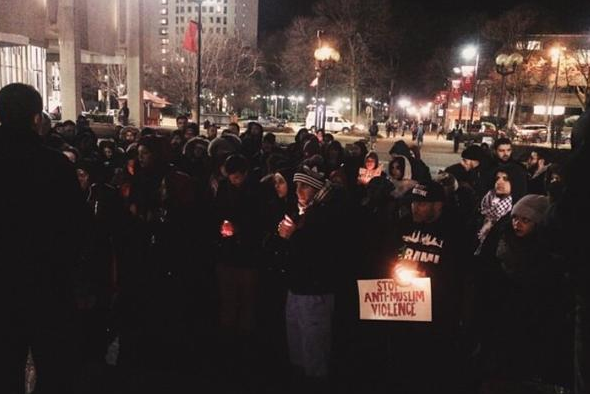 Deah Shaddy Barakat, 23; his wife Yusor Mohammad Abu-Salha, 21; and her sister, Razan Mohammad Abu-Salha, 19, were killed Tuesday near the University of North Carolina campus in what police said was an ongoing argument about parking; however, the families of the deceased said it was a hate crime — and police are investigating whether religious hatred contributed, The New York Times reported. Craig Stephen Hicks, 46, was arrested and charged with three counts of murder.

Students with the Temple Muslim Students Association held a vigil Thursday night at The Bell Tower to commemorate the three and protest violence against Muslims. FOX 29 reported that more than 100 students were in attendance.

In a statement on its Facebook page, the Temple Muslim Students Association — which organized the event — issued a statement:

"There are no words to effectively communicate the pain felt and as a Muslim community our hearts are heavy with sorrow from the atrocities committed in Chapel Hill."

Drexel's Muslim Students Association (MSA) also held a vigil at the Dragon statue on Thursday. An email sent to the Drexel MSA inquiring about the number of attendees was not immediately answered on Friday.