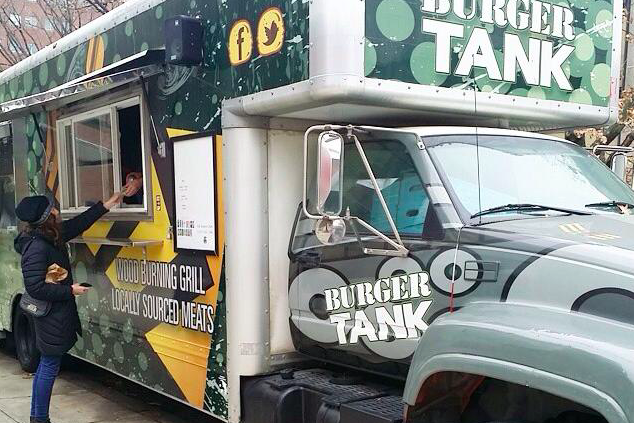 Burger Tank, located at 1300 West Norris Street, is one of dozens of food trucks faced with a daunting new reality at Temple University. Owner Peter Shin is working to prevent the city from enforcing an ordinance that would require food trucks to leave each night and return in the morning for business.

Students at Temple University have launched a petition to keep the campus' storied food trucks from having to comply with a city regulation that might threaten the owners' livelihoods.

More than 2,000 people have signed a change.org petition that seeks to prevent enforcement of a policy that would require Temple food-truck operators to remove their trucks from assigned locations at the end of each business day.

"It is common knowledge that many of the vendors at Temple do not move nightly, and the increased costs in maintenance, labor, and lost business due to the more limited hours of operation is likely to cause many of these vendors to close," the petition states.

Can you imagine all these trucks moving in at once, having to do so three to four hours before operation? It would be a three-to-five hour process every morning just to start business.
— Peter Shin, of Tank Burger

The ordinance in question was passed in 2015 with a goal of ensuring safe food preparation. Its primary change was a requirement that food trucks plug into PECO utility poles instead of running on generators. The trucks were also given permanent assigned locations on Norris Street, Montgomery Street, 12th Street and 13th Street, where two additional trucks operate.

While the overnight relocation ordinance (#150498) also became part of the city code at the time, it has not been enforced as part of the new arrangement at Temple.

A university spokesperson told PhillyVoice that the Department of Licenses & Inspections recently contacted Temple about the enforcement. Campus vendors were given copies of the policy and a deadline for compliance, after which the university applied for and received an extension until Monday, May 20. That leaves vendors less than a month to make the adjustment.

"Temple University maintains strong, working relationships with the nearly four dozen independent food vendors on campus," the university said in a statement. "The food trucks are a staple of the Temple experience, and have been for decades. We don’t want that to change."

A GAME OF TRAFFIC

Peter Shin is the owner of Burger Tank, a food truck he's operated on West Norris Street for several years. Shin is helping organize Temple's vendors to work with the university and the city to communicate the impact this policy would have on their businesses.

"I don't know if I'd be able to keep my business going if I had to move every night and day," Shin said. "Between moving and the logistics of deliveries, it's going to hurt vendors and force some to close."

Shin explained that the original ordinance appeared to be targeted at lunch trucks scheduled to appear for events. That's not the same as running a business throughout the week. While the trucks are on wheels, the business model of these campus vendors doesn't lend itself to mobility. They're more like stations.

"When we plug into the PECO poles, it's usually a two-to-three hour process to cool down refrigerators, bring in produce and meats, and make sure that food preparation is safe," Shin said.

By forcing trucks to leave every night, vendors will have to come back hours earlier every day to get ready for business, Shin explained. Temple's campus would look like a real-life version of the grid puzzle game "Traffic" every morning.

"Can you imagine all these trucks moving in at once, having to do so three to four hours before operation?" Shin asked. "It would be a three-to-five hour process every morning just to start business."

Another concern Shin expressed is that the street parking spaces designated for food trucks — and licensed to them for an annual fee of several hundred dollars — might be found occupied by student vehicles or other cars when trucks arrive in the morning.

Having a few dozen trucks descend on the same narrow streets every morning also will create traffic and road hazards to pedestrians on the busy North Philly campus, Shin said.

"That's pretty hard to do since all Temple food trucks got consolidated into three streets and were stacked on top of each other on three streets," Shin said.

Working with a university liaison, Shin said he's trying to coordinate a meeting between vendors, City Council, the university and even the Mayor's Office or local state Senator, if need be.

The role of organizer is something Shin has been compelled to take on because many of his fellow vendors are immigrants who lack the language skills needed to advocate for themselves.

"I just come here, I work and I grind away," Shin said. "Unfortunately, when they ask for someone to voice people's opinions, I'm one of the few who can. That pushes me. Yesterday, I had a Korean woman from down the street who said this is going to be terrible for them and might stop them from operating because they're getting older in age."

The students behind the food truck petition are demanding that City Council and Temple work together to amend the sections of the ordinance that pose a threat to the university's food trucks. They've also encouraged university president Richard Englert make a decisive statement in support of the vendors.

We want to keep the environment safe on campus and do vending like we've done it for 40 years.
— Peter Shin

"He should acknowledge the immense value and ineffable qualities our rich food truck culture creates for the Temple University community, and most importantly, that it is the priority of Temple University to support the families who own and operate these local businesses," the petition says.

Temple recently joined a group of neighbors in creating the North Central Special Services District around campus, which puts the area's management on par with similar zones including University City, Germantown, the Sports Complex and Old City.

Shin said the 2015 ordinance may have been intended to create a uniform policy for food trucks citywide, but in practice that creates unique problems for each area of the city where they operate.

L&I spokesperson Karen Guss provided some assurance in a statement late Wednesday afternoon, saying the city will take time to hear from the university and its food truck vendors.

"As the department should have done prior to initiating enforcement of these provisions, L&I will engage over the summer with vendors and other stakeholders to explore and address their concerns," Guss said. "We will not undertake enforcement until these discussions have taken place and apologize for any confusion or distress."

Shin and the rest of Temple's food truck vendors will try to muster all the support they can to maintain their way of life.

"We want to keep the environment safe on campus and do vending like we've done it for 40 years," Shin said.