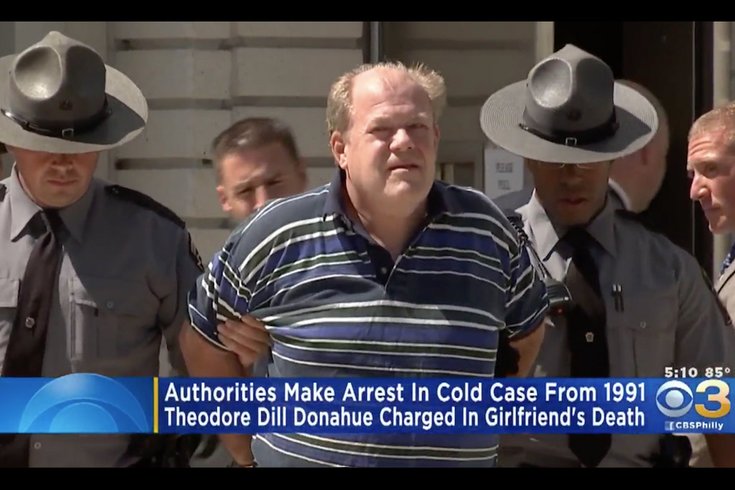 In this image from CBS3, a handcuffed Theodore Dill Donahue is led by Pennsylvania state troopers. He is charged in the 1991 murder of Denise Sharon Kulb in Delaware County.

More and more cold cases are being solved thanks to advances in DNA technology. Earlier this year, the infamous Golden State Killer was arrested after terrorizing California for decades thanks to DNA matched to a genetic database – a first in crime-solving history.

But a more common technology helped lead to the recent arrest of a Philadelphia man in a cold case dating back almost three decades. The only problem is most investigators don’t have access to it.

In this murder case that may have gone cold, but was not forgotten, investigators were assisted by Temple University’s photography department.

Theodore Dill Donahue, 52, was arrested September 3 in the murder of Denise Sharon Kulb, 27, a former girlfriend. The victim’s body was found partially decomposed on November 12, 1991, in an undeveloped part of Delaware County just off Harvey Road, still dressed in a sweater. The rest of Kulb’s clothing, including two pairs of pants, a t-shirt, jacket and one yellow sock, were piled on top of her.

According to Pennsylvania State Trooper Andrew Martin, the university got involved after investigators began taking a new look at the case in 2015, working to enhance old crime scene photos, most notably dark and grainy images of Donahue’s apartment at the time of the murder.

WHAT CRACKED THE CASE

Byron Wolfe, professor and program head of photography at the Tyler School of Art + Architecture at Temple University, personally worked with investigators to enhance 35mm color film negatives from the almost-30-year-old case files. While the technology isn’t particularly cutting edge – high-resolution scanners and photo imaging software have been around for many years – it can be cost-prohibitive for police departments to have the technology in-house. Investigators also don’t often have the time and talent to utilize these tools, especially if you consider that most cold cases are forced onto the back burner as police are pressured to investigate newer crimes. 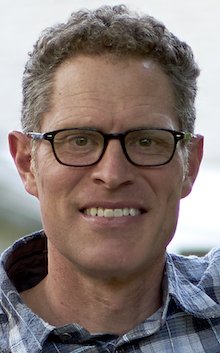 Byron Wolfe is a professor and program head of photography at the Tyler School of Art + Architecture at Temple University.

A big roadblock in the Kulb case was accurately discerning crime scene photos. Because the negatives were small, it was difficult to make out important details from images taken inside Donahue’s apartment at the time Kulb’s body was found. The residence was lit only by one or two incandescent light bulbs. As a result, Wolfe said, the images were severely underexposed – very dark and lacking detail – and suffered from strong colorcasts from the mostly yellow light common in the very early 1990s.

When the images were originally taken in 1991, 3x5-inch prints were also typical to investigative procedures. But in this case, the poor color, lack of detail and extremely dark images created a perfect storm, making it nearly impossible to extract important information from the pictures that investigators had long believed could help bring closure in the case.

“I scanned the film at a very high resolution,” Wolfe explained, “getting the sharpest picture with as much information as possible, making sure to preserve details in the darkest areas of the scenes.” Because he was using professional-grade equipment, the end results were even better and of much higher resolution than what someone might be able to achieve on a desktop computer.

These newly scanned and enlarged images showed so much new detail, in fact, that actual grains of silver on the film could be seen. Wolfe’s next step was what he describes as “pretty significant color correcting,” specifically “removing unwanted color casts so objects appeared to be closer to what we consider to be ‘normal.’ After that, I did a little digital sharpening that makes details a bit crisper, and then I made some high-quality prints.”

Similar processes have been done with historic images where original film (or glass plates) is scanned to reveal previously hidden details lost to time and the limitations of the technology of the day. “Most film is full of all kinds of information,” said Wolfe, “if you have the tools or wherewithal to extract or amplify it.”

Wolfe was inspired to try out these same techniques in the crime realm after he and another collaborator gained access to microscopic slides from the Wagner Free Institute of Science by the Langenheim Brothers, prominent 19th century Philadelphia photographers. “The slides contained images, too small to be seen with the naked eye,” Wolfe said. “We took them to the geology department at Temple and made photographs with a microscope and digital camera setup. Each picture captured about 1/30 of the whole image, which was less than 2 millimeters across.”

The array of individual images from the microscope were digitally stitched together to reveal scenes that have probably not been seen for a century or more since they were captured around 1855. “It just struck me how they were related to the police photographs in that information is often invisible until you think to look for it, or a new way to extract the information comes along,” Wolfe noted.

ALMOST HALF OF ALL U.S. MURDERS GO UNSOLVED

It’s no longer unusual for civilians and even universities to assist in cold cases. Many believe it was journalist Michelle McNamara’s book, "I’ll Be Gone in the Dark: One Woman’s Obsessive Search for the Golden State Killer," that ultimately helped put enough pressure on police to solve that infamous case using cutting-edge methods.

Podcasts like "The Murder Squad" encourage listeners to actively volunteer to help research and investigate cold cases, right down to interviewing people and going through old press clippings for any details that may have been overlooked. In fact, the guys from "The Murder Squad" are currently soliciting retired baby boomers to volunteer time to transcribe old case files into digital formats that can be put into an accessible database. It his hoped that could potentially shed light on many crimes and even criminal patterns across the country that are currently just collecting dust.

Cold case investigations, very often short on manpower and funds, can use all the help they can get. In Pennsylvania, for example, there are more than 4,000 cold cases waiting to be solved, according to Project Cold Case. And around the country, almost half of all murders go unsolved each year.

Since 2006, the Department of Justice (DOJ) has been trying to solve many of these cold cases by creating the Cold Case Initiative, a comprehensive effort by the DOJ that offers rewards for new information and rigorously solicits help from communities, experts, universities and journalists across the country. 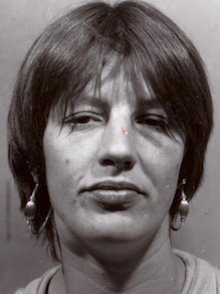 These initiatives have legs in an era where true crime is gaining traction among diverse audiences that include many women. For example, in 2016, a group of college students began working with the Seeking Justice project in Michigan to solve cold cases, as have citizen detectives from coast to coast. Even big data companies are leveraging their tech to help investigators do what humans can’t (hello, artificial intelligence).

In Philly, the police department is taking advantage of online tools to try and solve these cases as well. In August, it launched Philly Unsolved Murders, a website that provides details about unsolved crimes throughout the region, including personal stories that truly help humanize those involved. What makes this effort so unique is that people can share information anonymously.

In Kulb’s case, the photo-enhancing technology, coupled with investigators using new sets of eyes and a better understanding of the people involved almost three decades after the murder, offered up stunning new evidence: a yellow sock in Donahue’s apartment matched the yellow sock found on Kulb’s body.

Even before the photos revealed possible evidence connecting Donahue to the crime scene for the first time in the Kulb investigation, he had long been a prime suspect in her murder. Not only was he known to stay at a motel about a mile from where Kulb’s body was found, he changed his story to investigators on several occasions.

Initially, when the case was investigated by local police in Delaware County, there was no evidence tying Donahue to the murder. But when the case was reopened by the Criminal Investigation Assessment Unit of the Pennsylvania State Police in 2015, Donahue’s story had changed considerably.

When Donahue was first interviewed in 1991, he claimed he and Kulb had purchased and smoked crack cocaine on Oct. 18, 1991, and that they were allegedly robbed at knifepoint by an unknown assailant. He told them that after she ran to get help, he never saw her again. At the time, he suggested to investigators that he wanted to help with the case, injecting himself into the investigation and asking to see the autopsy report.

"She deserved far better than to be killed and left in a location unknown to those who mourned her. We are determined to help deliver closure and some peace of mind to those who have waited for a resolution of this criminal investigation for nearly 30 years.” – Philadelphia District Attorney Larry Krasner

But when Donahue was interviewed by investigators in 2015, he gave a completely different story, saying he had met Kulb at a bar and that he had lied about the attempted robbery.

Kulb's sister seemed to back up the claim, in part, telling investigators that on the day of Kulb's disappearance (October 19, 1991) she had seen the couple fighting outside the bar where her sister worked. Friends and family confirmed that Kulb also attended a funeral that same day before she went missing. It would be the last time anyone saw her alive.

Investigators now believe that Kulb was likely murdered in Donahue’s apartment on the 200 block of Salaignac Street near Manayunk, her last known address, and that her body was moved to the remote area where she was eventually discovered just a few miles away. It’s likely the yellow sock had been accidentally left in the apartment when the body was moved.

According to investigators, more than just the sock pointed to Donahue as a suspect. He also allegedly shared details about the murder that they say no one but the killer could have possibly known, like that Kulb had been strangled to death before being left face down in the woods. These were details that police purposely did not release to the public.

‘SHE WAS A MOTHER, A SISTER, A FRIEND’

“Twenty-eight years ago, Denise Sharon Kulb was found dead in a remote area in the suburbs, abandoned and discarded. She was a mother, a daughter, a sister, a friend," Philadelphia District Attorney Larry Krasner said after Donahue's arrest. "She deserved far better than to be killed and left in a location unknown to those who mourned her. We are determined to help deliver closure and some peace of mind to those who have waited for a resolution of this criminal investigation for nearly 30 years.”

Donahue, who has been charged with murder, abuse of a corpse, tampering with evidence, obstruction of justice and making false reports to police, has pleaded not guilty. He’s currently being held without bail at the Pennsylvania State Police barracks on Belmont Avenue. Prior to his arrest, Donahue was delivering pizzas in Germantown.

His attorney, R. Emmett Madden, said in a statement, “He is innocent, and we look forward to proving his innocence in court.”

No doubt, Donahue will face questions from prosecutors about the yellow sock that Wolfe was able to help link to its apparent mate at the crime scene.