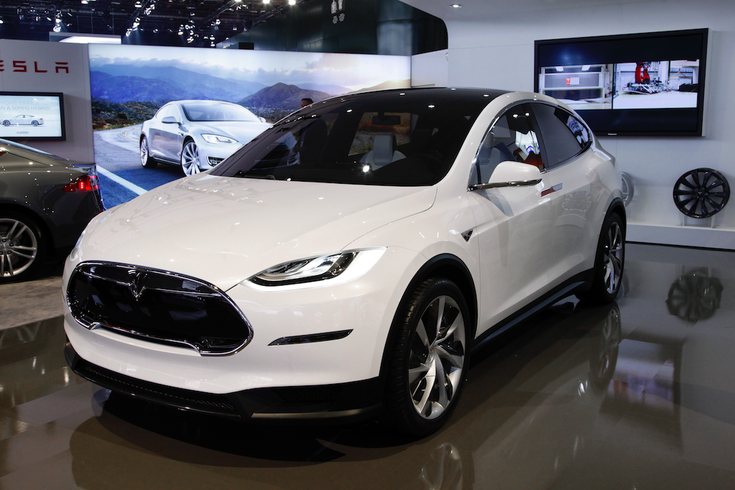 The Tesla Model X car is test driven at the company's headquarters Tuesday, Sept. 29, 2015, in Fremont, Calif. Tesla's Model X — one of the only all-electric SUVs on the market — was officially unveiled Tuesday night near the company's California factory.

The Pennsylvania State Police are investigating the crash of a Tesla Model X that lost control while in autopilot mode last Friday on the Pennsylvania Turnpike.

According to the Detroit Free Press, suburban Southfield art gallery owner Albert Scaglione was driving his 2016 Model X near the Bedford exit — about 107 miles east of Pittsburgh — when his vehicle slammed into a guardrail.

Pennsylvania State Trooper Dale Vukovich said Scaglione's car plowed through the guardrail into the eastbound lanes before striking a concrete median, rolling onto the roof and coming to rest in a lane near mile marker 160.

Miraculously, Scaglione managed to escape without injury, as did the driver of a 2013 Infiniti G37 whose car was struck by debris.

The Pennsylvania crash occurred just two days after the National Highway Traffic Safety Administration (NHTSA) released its report on a fatal self-driving Tesla crash two months ago in Florida. On May 7, a 40-year-old Ohio man and former Navy SEAL was killed when his 2015 Tesla Model S flew under a tractor-trailer at a busy intersection without a traffic light.

The NHTSA has since launched an investigation into the design and performance of Tesla's system, with plans to issue a set of near-term guidelines for autonomous vehicle research.

Billions of dollars have been invested by more than two dozen companies in a race to achieve the standard of self-driving vehicle performance. With 10 million self-driving cars expected to reach the road by 2020, it's no longer a technology of the distant future. Just last month, Pennsylvania established a task force for the development of self-driving cars, led by researchers at Uber and Carnegie Mellon University.

In response to the Florida crash, Tesla reiterated that while its system isn't perfect, autopilot mode represents a major advancement in driver safety.

"When used in conjunction with driver oversight, the data is unequivocal that Autopilot reduces driver workload and results in a statistically significant improvement in safety when compared to purely manual driving," the company said in a statement.

Autopilot is currently in a public beta phase. Drivers can only activate it by acknowledging that the technology is an "assist feature" that requires both hands on the steering wheel at all times in its current semi-autonomous stage.

Pennsylvania State Police said charges against Scaglione are forthcoming because of insufficient evidence to prove a malfunction in Tesla's Autopilot.