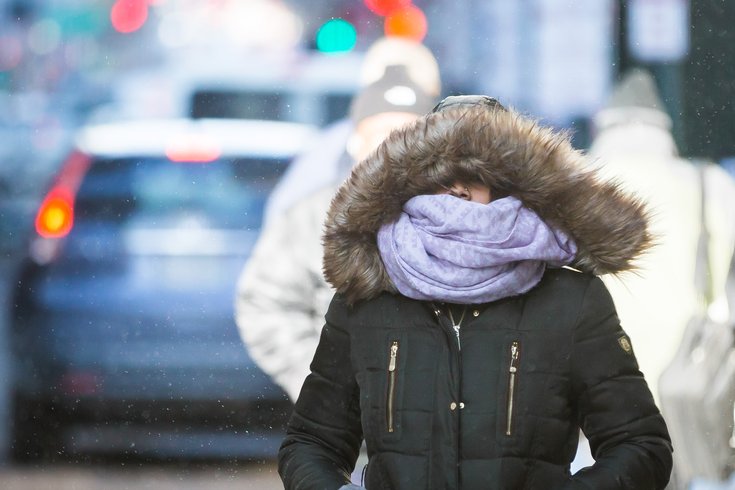 In this file photo from January 2018, a woman in Center City Philadelphia is dressed for cold weather on a day that reached a high temperature only in the teens.

Temperatures in the Northeastern U.S. on Thanksgiving are likely to be so cold that they'll break records.

In Philadelphia, the National Weather Service says the daytime holiday forecast looks sunny with a high near 28 degrees. It will be windy during the day, too, with gusts as high as 24 miles per hour.

Thursday night, temperatures will dip into lows around 19 degrees.

The Washington Post reported only three Thanksgivings have ever had high temperatures below 30 degrees. In Philly, the record cold daytime temperature was 30 degrees back in 1996.

Luckily for the Philadelphia area, we'll dodge the impending snow storm some regions are facing that could complicate an already hectic time to travel. Parts of northern New England will receive a heavy burst of snow Tuesday into late Wednesday morning.

And unfortunately, Tuesday is projected to be the busiest day for travel before the holiday, according to AAA, and will break some records of its own. 54.3 Americans will use some form of transportation that day, which is the highest volume of travel the U.S. has seen since 2005.

Here is the weather forecast through Sunday for the holiday weekend, according to the National Weather Service:

TUESDAY NIGHT: Mostly clear, with a low around 31. Winds 5 to 10 mph.
WEDNESDAY: Mostly sunny during the day, high temperature near 44 degrees. Winds gusts reaching as 28 mph. It will become clodier at night and the temperature will drip to around 24 degrees. Winds will around 11 mph.
THURSDAY: Sunny, cold and windy. High near 28 degrees. Northernly winds blowing 9-11 mph, with gusts as high as 24 mph. Overnight, temperatures will dip further to around 19 degrees.
FRIDAY: Sunny, high near 36 during the day and an overnight low around 28.
SATURDAY: Chance of rain or freezing rain before 10 a.m. Chance of precipitation is 40%. High temperature near 51 degrees. Chance ofg rain increases to 70% at night, and the low temperature will be about 45.
SUNDAY: Chance of rain about 40 percent. Mostly cloudy, with a high near 56. Forty percent chance of rain that night. Low temperature about 43 degrees.