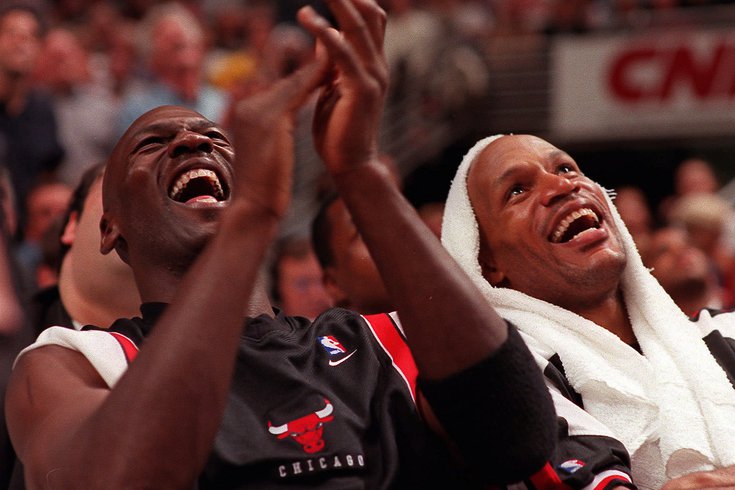 The story of the Michael Jordan Bulls continues to be must-see television.

After two straight weeks of avoiding any controversial Michael Jordan topics, The Last Dance finally attacked them on Sunday night, addressing everything from his gambling to his infamous "Republicans buy sneakers too" line that has lived on through history. And episodes five and six of the docuseries were better for it, even if it feels like they're still leaving a better series on the table.

Here's what stood out on Sunday night.

There were some great candid moments in the locker room at the 1998 All-Star Game, where Jordan went up against a young Kobe Bryant in a passing of the torch moment. Not all of it was so nice.

"If I was his teammate," Jordan said to the room of Eastern Conference All-Stars, "I wouldn't pass him the fucking ball!"

To the late Bryant's credit, he certainly knew his audience when he sat down for his interview for The Last Dance. Rather than trying to get involved with the comparisons and hypotheticals involving the two, Bryant instead took a moment to thank Jordan for the help he gave him over the years, revealing that Jordan told him he could call at any time to ask him questions and work on his game.

"What you get from me, is from him," Bryant said.

Calling him his big brother takes on a different level of significance after Jordan referred to Bryant as his little brother at Bryant's funeral, and while this relationship wasn't explored much beyond the opening segment, it was a nice snapshot of their bond.

Man, did Adidas fumble the bag with Jordan

Michael Jordan is the reason sneaker deals are available and as lucrative as they are for players today. And you could argue that it wouldn't have been possible if not for one of the biggest companies in the world absolutely blowing it.

Jordan, who professed to be an Adidas fan (backed up by video from back in his college days), ended up going with Nike because they offered him the most money while his favored brand was in a state of disrepair. With Nike experimenting in new technology at the time, it gave them the perfect platform to take a risk and create the Air Jordan, which was an overwhelming success even compared to their internal expectations. Nike's goal was to make $3 million in sales by the end of Jordan's four-year rookie contract. They made $126 million in the first damn year.

Hindsight is 20/20 of course and it would have been hard to anticipate Jordan being one of the biggest stars of all-time, let alone sports starts, but maybe this is something to keep in mind the next time a kid with a clutch college career and oozing with style comes down the pipeline.

And not for nothing, but maybe Jordan would have been better off with a different company. When he wore the Jordan 1's in a game at MSG during his final Bulls season, he claims they made his feet bleed. Needed a little more cushion in those bad boys to hoop in — that gives you some appreciation for the dudes who were playing in PF Fliers back in the day.

Finally, a subject that has been uncomfortable for Jordan for years getting addressed in this documentary. Long dismissed as an urban legend, Jordan copped on camera to his now-infamous line coming out of his mouth — with additional context, of course. Jordan says he made the above statement as an off-the-cuff statement while on the team bus, rather than offering it as an official stance, when he refused to endorse senatorial candidate Harvey Gantt in his home state of North Carolina.

The opening hour on Sunday night centered largely around Jordan's prominence in the sneaker industry, mostly through the lens of how it reflected his own competitiveness. When the Dream Team took the podium to get their gold medals in 1992, Jordan covered up the Reebok logo on his Team USA gear with a perfectly placed American flag, which was framed by the filmmakers as an extension of what made Jordan great on the court.

As we've seen with other athletes in recent years, most notably LeBron James' silence (or worse than silence, really) in response to the China incident last year, allegiances with brands often come with a cost that isn't monetary. Jordan felt strongly enough about Gantt to send him money for his campaign but recognized the potential consequences if he stepped out publicly to endorse him. The remark itself may have been flippant, but the stakes are/were clear. Everyone has a price.

Losing money to a mulleted man playing quarters back in the locker room? Drinking beers and smoking cigars after games with Scottie Pippen and Ron Harper instead of grabbing a Gatorade or getting treatment? Sure sounds like a guy who would have been roasted to death by the modern media — at least if he wasn't able to win.

Let's set aside how that would be received in the modern era (I suspect he'd continue to get away with a lot if he won at the same clip) and address how ridiculous his claims are when looking back at that period of his life. Not to profile anyone over their name, but you're telling me he was going out golfing and paying up $57,000 in golf debts to a man named Slim Bouler and never had any suspicion he was running with a shady cast of characters? I would not so much as play Go Fish with a guy named Slim. Every time a touchy subject has come up, Jordan has handwaved it away with shoddy explanations, and it only got worse this time around.

And then we arrive at a quote from an interview with Connie Chung in the early 1990s: "I don't have a gambling problem, I have a competition problem."

Isn't the exact sort of thing someone with a gambling problem says to justify their behavior? Don't loved ones stage interventions and take decisions out of the hands of people who offer up such paper-thin explanations? Like so many stories in this documentary series, it was relegated to part of his hero's tale, a motivating factor in the team's third championship in 1993, rather than something he might actually have to address at some point in his life or a flaw stemming from the same drive that made him successful.

This is not to say we need to make Jordan out to be a bad person if he so happens to have compulsions stemming from that maniacal drive. But it is certainly worth a deeper examination, particularly for a man who is used as a hero, a role model for young athletes to pattern themselves after. And there are even applications to the lives of everyday people — we all need to learn when to flip the switch on and off, when to prioritize our lives and our families over work, and so forth.

If you needed the Isiah Thomas hate burned into your brain anymore, Jordan made sure you got the message back in 1992.

"No Isiah Thomas questions," he told a reporter who sat down for an interview with him prior to the Olympics.

There was plenty of animosity in that Dream Team camp anyway, with the old guard (mostly Magic Johnson) trying to resist Jordan's ascent to the very top of the league. But Jordan's greatness was apparent even within that group of players, and they would all have to rally around him or get run over.

Circling back to the role model question, something that I think should be noted is Magic's role in lightening the situation on the team bus after the infamous practice scrimmage. From the outside looking in, it's easy to dismiss the role of personalities in a player's (or team's) success. But the ability to ease tension, communicate effectively, and find ways to bond with different types of people is an extremely underrated element of team building, at least on the fan side of things.

My personal favorite part of that portion of Episode 5 was a different stretch concerning Toni Kukoc. No, not because Jordan and Scottie Pippen humiliated him to prove a point to Jerry Krause, but because Kukoc's response to getting absolutely clowned by two of the best players in the NBA was to stand up and respond, not just in those Olympics but later as an important member of the Bulls title teams in the latter half of the 90s. A lesser player/man would have folded, but a young Kukoc used it as fuel on the fire, which earned the respect of Jordan even before they formally became teammates.

(On a Sixers note — trading Kukoc as part of the Theo Ratliff-Dikembe Mutombo trade in 2001 is one of the most under-discussed topics of that season. Kukoc was a reliable secondary creator and an elite shooter that season, and they badly missed him once he moved on. Larry Brown and Billy King really blew it.)

I did think it was interesting that in a series that has been filled with so many shots at his competition from that era, Jordan sent almost no shade in Charles Barkley's direction. He wasn't a positional competitor like Clyde Drexler or a man he hated like Isiah Thomas, but Barkley was one of the few guys who could be considered a "peer" with Jordan during that time. In Jordan's world, not showing flagrant disrespect is the ultimate sign of honor.

These were probably my favorite episodes so far, though I still think there's a lot being left on the table as a result of Jordan having so much say with what footage is left in. At least we're finally getting to the real Michael Jordan.