What does departure of Marc Eversley mean for Sixers front office? 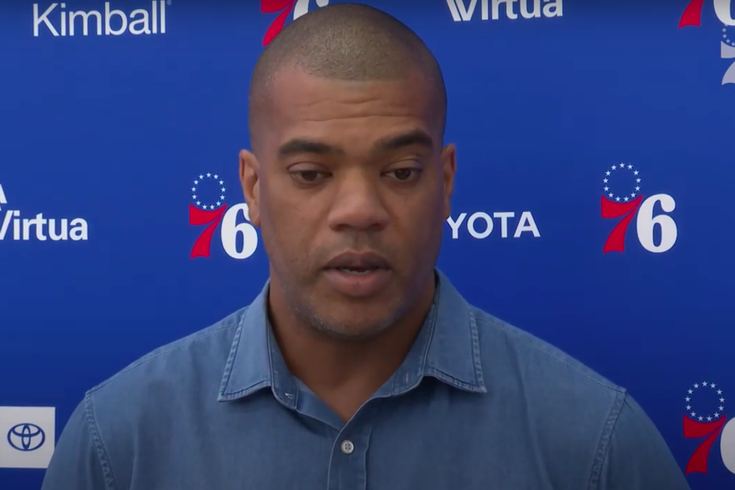 Marc Eversley has left the Sixers to take the GM job in Chicago.

Even if you follow the Sixers closely, you may not know who Marc Eversley is. Outside of the odd speaking appearance during the pre-draft process, Eversley was a background figure in Philadelphia, public scrutiny turned toward Joshua Harris, Elton Brand, and Brett Brown in the team's power structure.

That changed for Eversley on Friday, when he was officially unveiled as the new GM of the Chicago Bulls (official as Zoom calls can be, anyway.) Eversley, one of Bryan Colangelo's first hires as the lead executive in Philly, departs after four years with the franchise to be one of the faces in Chicago. While Eversley's journey is unique, taking him from Canada to Nike to his first NBA job under Colangelo in Toronto, his aspirations are just like anyone else's.

"Everything starts and ends with winning," Eversley said on a conference call Friday. "Our mindset will be about excellence day in and day out. Bulls fans, hear me when I say our ultimate goal is to bring a championship back to the city of Chicago."

Back on the East Coast, the Sixers view this as a sizable loss, but most are excited for Eversley, who has drawn positive reviews from everyone surveyed about his time with the franchise. His relationships with some members of the front office date back over a decade and those around him have known he has coveted an opportunity like this one for a while.

But who is Eversley? The public isn't really in touch with that beyond some broad strokes facts about his journey. Best I can explain it, there are three primary areas Eversley was involved in with Philadelphia, some of those responsibilities more significant than the rest.

Bullet points one and three often intersected during Eversley's time in Philadelphia. During Elton Brand's first year as GM, when Philadelphia's lead executive was getting his legs under him and learning the ropes, Eversley was asked to do some extra scouting legwork, going on trips that would normally fall more on the GM. Eversley specifically credited current Raptors GM Masai Ujiri, who he called one of the top executives in all of sports, for influencing his approach to scouting.

Philadelphia's track record on that front has been a bit all over the place, even on Eversley's watch specifically. He was at the forefront of the Sixers tracking Matisse Thybulle, per discussions with people around the team, but he was also given some credit for one of the most dubious picks in team history:

BC recalls watching Fultz during HS showcase games, said team tracked him ever since. "Mark Eversley said, 'That guy, he's the one.'"

Without blaming or crediting Eversley for any one specific thing, it's clear he had a sizable impact in Philadelphia's scouting process if nowhere else. Their track record has been far from perfect, but when they've used their picks instead of selling them off, their hit rate in the late first-round and further back has been stellar, producing finds like Landry Shamet and Shake Milton. Eversley's connections to the business side of basketball via his time with Nike were also a useful resource in various ways, though the value there is a bit more nebulous. He'll have the say to make larger changes at his new post in Chicago, which sounds like it's alot of the draw for Eversley.

Eversley has a lot of work to do by his own admission. On a conference call with reporters on Friday afternoon, Eversley expressed his shock that the Bulls only had one dedicated player development coach on staff, compared to over a dozen people who count that in their title in Philadelphia. But moving into the GM role and assuming the responsibility that comes with it appealed to Eversley, who becomes the first black GM in the history of the Bulls franchise, something he doesn't take lightly.

"I'm a black man in a leadership position in a city with a lot of black youth," Eversley said Friday. "I think this position gives me some resources to help drive change."

As of Friday morning, GM Elton Brand has not made a determination whether Eversley's role would be replaced specifically, a team source told PhillyVoice, though those discussions remain ongoing. For the time being, the team is confident their senior staffers in the front office can pick up the slack and offer assistance to make up for the absence of Eversley.

Two people who will take on additional responsibility in the interim? Sergi Oliva, the team's current VP of Strategy, and Vince Rozman, VP of Scouting. Oliva was brought in as an analyst under Sam Hinkie in 2014, and Rozman is one of the longest-standing members of the front office, his days as a scout coordinator pre-dating Philadelphia's current ownership group.

Rozman, who was promoted last summer, is "running the show" in Philadelphia's day-to-day prep for the draft, as it was explained to PhillyVoice. Oliva has taken on a larger role with the coaching staff, in addition to offering support and strategic assistance to the rest of the front office.

While all of this seems rather unimportant at the moment, given how far away live sports feel in our current moment, this is a good test of the remaining front office structure, which has been relatively unchanged since Bryan Colangelo took over and made an initial round of hires. The two men immediately under Brand on the org. chart (Rucker and Ned Cohen) remain in place, and Brand continues to have plenty of support underneath him in spite of losing Eversley.

Whether this front office group will continue to have the support of ownership following what has been a tremendously disappointing season is another matter entirely, but that's a story that will develop in the months to come. For now, the fairest assessment is to say the Sixers lost a well-liked and influential member of the front office, leaving a void to fill in one way or another.