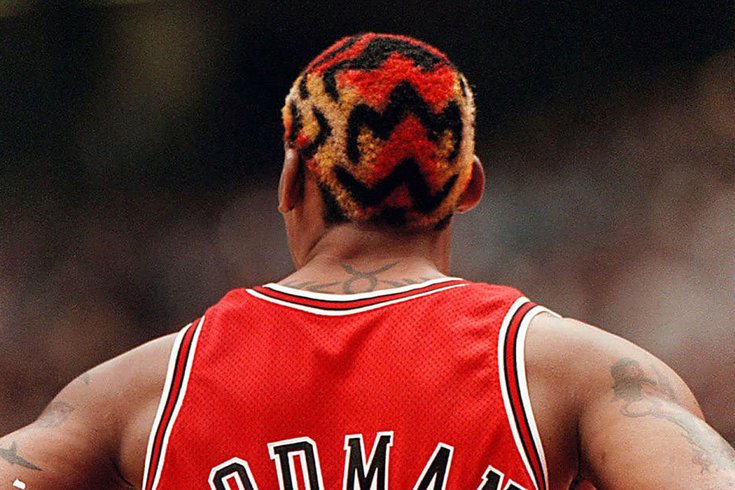 Chicago Bulls' Dennis Rodman during Game 3 of a first-round playoff series against the New Jersey Nets in 1998.

We got the Dennis Rodman episode that was promised, Michael Jordan tearing into Isiah Thomas three decades later, and a vision quest with Phil Jackson, so you might say the third and fourth episodes of The Last Dance were quality entertainment.

Here are some of the things that stood out on night two of this extraordinary series.

[Editor's note: This post contains some NSFW language that some may find offensive.]

Dennis Rodman was not just a sideshow

Over the years, the lasting images of Dennis Rodman are his valleys rather than his peaks. Struggles with depression, kicking a cameraman, ejections, rainbow-colored hair, even dating Madonna are the things the average person think of when they hear his name. That's part of adopting an image that was extraordinary for the time period.

Do not let that overshadow just how good Rodman was as a basketball player, or how important he was to those Bulls teams even at an advanced age. Even throughout a two-hour portion of the documentary featuring plenty of shenanigans, The Last Dance highlighted what made Rodman great. He would go to the gym late at night, asking friends to shoot so he could study the trajectory of rebounds. Footage showed him in the locker room with headphones on studying game film. And Rodman himself even said his prep work was deep enough that he could tell the difference between the spin of one player's shot vs. another's.

There was no way for Rodman to succeed living the life he did if he didn't commit as much energy to basketball as he did to partying. And by all accounts, he did — even if he ended up sneaking some booze into the gym and taking Vegas vacations midseason. He was important enough for Jordan to go to Vegas to track him down, forcing Carmen Electra to hide out of sight out of embarrassment.

The most fascinating part of this documentary is seeing how Jordan, Pippen and Jackson embraced him and allowed him to be who he wanted to be. Jordan seems like the complete opposite of Rodman as a person, but he came to understand that the way to win with Rodman was to allow Rodman to be who he wanted to be while channeling his competitive best between the lines. They were an odd mix of characters, but they bought in for the sake of the team. A lot of current athletes and coaches could learn something watching this.

I'm sorry, but framing an episode of this documentary in a way that allowed Doug Collins to assume credit for apex Jordan — including an All-Star MVP award — is absolutely insane and I cannot believe I just watched this happen on national television. He and Jordan obviously seemed to hit it off, or I wouldn't imagine they would have shared a kiss on TV together, but man.

Shout out to the news anchor from episode four for the burn of the century: "If you're getting ready for work this morning, you're probably not Doug Collins."

While we're on the subject of coaches, Phil Jackson's emergence is one of the many reasons I am so adamantly opposed to retread coaches when teams have opening (including when the Sixers could this summer). They took a guy who was coaching in Puerto Rico and later the CBA, groomed him as an assistant under a wise basketball mind, and gave him a shot with perhaps the greatest player ever's career in its prime. All they got in return was the most successful coach in modern NBA history.

Be creative and look for the next great one, rather than settling for good enough.

Am I absolutely loving this shit? You bet I am. Is it cut in the way an honest documentary of Michael Jordan's career should be? Probably not.

A lot of the ugly parts of Jordan's career are being papered over as we make our way from the mid-1980s through the end of his time in Chicago. His role in Doug Collins' ouster was painted as the doing of Jerry Krause and Jerry Reinsdorf, when the discontent of Jordan and the rest of the Bulls played a huge part in moving on. The Scottie Pippen migraine game in the 1990 Eastern Conference Finals, which Jordan not-so-diplomatically moved past in the documentary, was a real point of animosity between Jordan and Pippen back in the day.

Don't believe me? When Jordan had a 22-point game in the 1991 Eastern Conference Finals — a down night by his standards — he told reporters covering the Bulls, "I may have had a headache today." A year later, following a game the team won, Jordan still couldn't let go his teammate being physically unwell in a big moment the year before.

And don't even get me started on the hero's praise Jordan and the Bulls got in this documentary for lifting weights in the summer of 1990. The audience is supposed to be impressed that you finally started doing summertime squats after six seasons in the NBA? That was the secret weapon that allowed you to take off and beat your hated rival? Come on, man! If anything, that's a blemish on your permanent record, evidence that you could have reached the summit prior to 1991.

I'm not expecting this to be a teardown of the Jordan legend, and the intimate moments we get as a result are terrific. Hearing about Jordan breaking down after winning the 1991 Finals and treasuring all it took to get there was terrific, and I am going to be locked in for the next three weeks of this. But you can tell the man has tight control of this series. We don't have to pretend Jordan was a perfect person to show he was a great athlete and a great representative for the sport.

(Poor Scott Burell, by the way. Got put on blast for absolutely no reason to close out the episode.)

Decades after they stopped playing against one another, Jordan has not let any of the hatred he has for Thomas go. After watching Thomas explain Detroit's walk-off without shaking hands in the 1991 Eastern Conference Finals, Jordan could not help but sneer at his former rival's explanation for what happened, accusing him of retrofitting his story. And he wasn't exactly wrong.

Look at Jordan's demeanor in this clip and tell me you can't feel the animosity:

This is why MJ is the GOAT pic.twitter.com/lRviTziqMg

There are not many rivalries in all of sports, let alone in today's NBA, that live up to this one. We'll see if next week's episodes, which seem to center around the Dream Team, touch on how this rivalry impacted the construction of the 1992 Olympic team. Sports hatred, assuming it stays sports only, is a beautiful thing.

(By the way, what the Pistons did in 1991 was total bullshit, and Jordan was right to be peeved after shaking their hands and giving them credit a year before. But let's also point out Boston doing the same thing to Detroit in 1988 was total crap, and they got away with it.)

ESPN with profanity is much better than without it

A sampling of quotes from night two of The Last Dance:

Forget the kids, I need regular profanity on sports TV. Make an ESPN Jr. for the youngins and let the grown folks hear it without the censors.